There will be visitation at the church after 9:30 a.m. Wednesday. The Schluter  Balik Funeral Home in Calmar is in charge of arrangements.

Loretta Agnes (Luzum) Collins was born on April 16, 1931, the daughter of William and Leona (Schissel) Luzum, on the family farm west of Calmar, Iowa. Loretta was baptized, received First Holy Communion and was confirmed at St. Aloysius Catholic Church in Calmar. Loretta attended St. Aloysius Elementary Catholic School. Loretta worked for Collins Radio in Cedar Rapids, Iowa. She was married to Alfred Collins in Calmar, Iowa. They lived in Terra Haute, Indiana and then to Rochester, New York, and they had four sons: Donald, Jeffrey, Michael and Joseph. Loretta worked at the Red Vest in Calmar until she was a resident at Wellington Place Nursing Home for many years. She helped in the assisted living with daily chores and also at Spectrum Industries in Decorah. Loretta was recently a member of St. Benedict Catholic Church in Decorah. 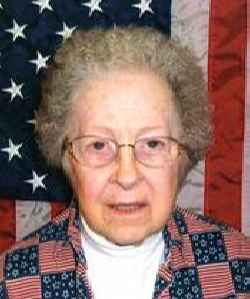