Friends may call after 10:00 A.M. on Saturday at the Church. Fjelstul Funeral Home in Decorah is in charge of the arrangements.

Stella H. Erickson was born January 12, 1905 in Springfield Township near Decorah, Iowa, the daughter of Julius and Emma (Peck) Brown.

She was united in marriage to Norman Gerhard Erickson on March 3, 1937 in Decorah. To this union, two daughters were born: Ruth and Arlene.

Stella and Norman operated a dairy farm until his death on February 21, 1952. She then moved to Decorah and worked as a cook at Smith Memorial Hospital for 5 years, worked in housekeeping at Luther College for 14 years, and then as a housekeeper in private homes until she retired at the age of 80.

She was a longtime member of Washington Prairie Lutheran Church in Decorah. She liked to cook, garden, sew, play cards and go fishing in Canada. Stellas grandchildren and great grandchildren were a very important part of her life.

Stella relocated to Iola, Wisconsin on June 28, 2002 to be closer to her family. She died Wednesday, September 20, 2006 at the Iola Living Assistance in Iola at the age of 101 years.

She was preceded in death by her parents, her husband Norman; a daughter and son-in- law, Arlene and Earl Bigalk and three brothers, Lloyd, Leonard, & Clarence Brown. 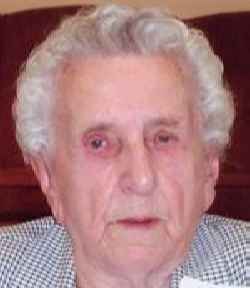