A. Irene Aschim, age 97, of Decorah, IA and formerly of Ridgeway, IA, died Friday, May 28, 2010 at Barthell Order of Eastern Star Home in Decorah.

Funeral Services will be held at 11:00 A.M. Thursday, June 3, 2010 at Peace Lutheran Church in Ridgeway by Rev. Phillip Olson and Rev. Ginny Olson. Burial will be in United Lutheran Cemetery, rural Ridgeway.

Visitation will be from 5:00  7:00 P.M. Wednesday, June 2 at Fjelstul Funeral Home in Decorah and on Thursday one hour before the service at the church.

Alice Irene Aschim was born February 11, 1913, to Ole and Olena (Brekke) Rue at her parents home in Ridgeway, Iowa. She was baptized at Lincoln Lutheran Church on March 23, 1913 and confirmed her faith at Lincoln on May 29, 1927. Irene attended Ridgeway public school through 11th grade and attended Decorah High School her senior year where she was active in the school orchestra and played basketball. She graduated with the Decorah Class of 1931.

She married her high school sweet heart, Henry Morris Aschim of Decorah, on December 30, 1933 at the Lincoln Lutheran Church in Ridgeway. They farmed on Henrys grandmothers farm in Glenwood Township for 2 years. In 1935, Henry and Irene purchased the Chester Corner Café in Chester, Iowa. Henrys sister, Palma, worked with them. They lived in Chester for 3 years, during which time their daughters Marilyn and Cheryl were born. In 1939, they sold the café and moved to Canton, MN, where they bought the old bank building and started up a pop corn business, Aschims Golden Toasted. They had popcorn routes all over northeast Iowa, selling pop corn to grocery stores, filling stations and 3 ballrooms. After 2 years, they sold the popcorn business to Roger Rue, Irenes brother. In 1940, they lived in Ridgeway for 10 years, and Henrys interest in farming led him to purchase land near Ridgeway where they operated a dairy farm and sold Grade A milk. They lived on the farm for 52 years. Two daughters, Cindy and LeAnn joined the family during this time. They attended Ridgeway Lutheran Church, then Peace Lutheran Church where they were involved in many activities. Irene was very active in Ladies Aid, couples club and teaching Sunday school, Bible school and Bible studies.

When Irene turned 65, Henry bought her a life time fishing license and for the next 20 years, they spent many hours trout fishing in northeast Iowa streams. They were active in the Sons of Norway, serving in many offices.

In 2002, Henry and Irene moved to an assisted living facility in Mankato, Minnesota. In 2006, Irene moved back to Decorah where she was a resident at Barthell Order of Eastern Star Home.

Irene loved reading, cooking, sewing (making 60 afghans), gardening, and spending time with her family. Irene had a servants heart and her ministry to others was motivated by a deep and abiding faith in Jesus Christ, her Savior.

She was preceded in death by her parents; her beloved husband, Henry on June 27, 2005; 2 daughters: LeAnn Aschim on October 31, 1971 and Cheryl Dauterman on September 8, 1986; 2 brothers: Malcolm and Loren Rue; and a sister, Helen Anderson. 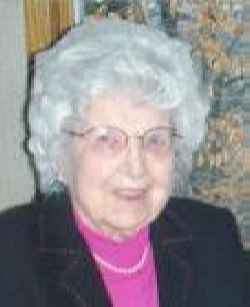