Funeral Services will be held at 11:00 A.M. Thursday, January 5, 2006 at First Lutheran Church by Rev. H.G. Engebretson with burial in Lutheran Cemetery in Decorah.

Fjelstul Funeral Home in Decorah is in charge of the arrangements.

Kathleen Jeneva Kay Finberg was born December 18, 1916 in Bowman, North Dakota, the daughter of Ray J. and Oletta C. Lottie (Larson) McConnell. She was baptized on June 8, 1920. Kay graduated from Decorah High School with the Class of 1935.

She was united in marriage to Elvin O. Pete Finberg on January 16, 1938 in Cresco, Iowa. To this union, two children were born: Sharon and Robert.

Kay was a homemaker and worked for twenty years at the former Montgomery Ward store in Decorah. She was also a longtime Girl Scout leader and a member of First Lutheran Church.

She was preceded in death by her parents; her husband Pete on September 27, 1993; and a brother, Wendall McConnell. 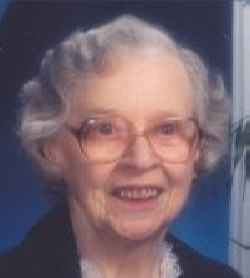