Funeral Services will be held at 11:00 A.M. Thursday, August 25, 2005 at Decorah Lutheran Church by the Rev. James Glesne with burial at 3:00 P.M. Thursday at Coon Prairie Lutheran Cemetery in Westby, Wisconsin.

Friends may call from 9:00-11:00 A.M. Thursday at Decorah Lutheran Church. Fjelstul Funeral Home is in charge of the arrangements.

Beatrice Margaret (Peterson) Finanger was born May 6, 1906 in Westby, Wisconsin, the daughter of Oluf and Laura (Neprud) Peterson. Growing up in Westby, she was confirmed in the Lutheran Church, played basketball on a girls traveling team, loved to ski and graduated from Westby High School with the class of 1924. After working as a dental assistant for one year, she attended LaCrosse State College.

Betty met and married Earl I. Finanger on October 16, 1926 in Winona, MN. To this union, three children were born: David, Kenton, and Patricia. They lived in Melrose, LaCrosse, Wauwatosa and Brookfield, Wisconsin. The Gateway Transportation Co. employed her husband. They were very active members of Mt. Carmel Lutheran Church in Milwaukee where they had many close friends. She was a homemaker and loving wife, devoted mother, grandmother and great-grandmother for all of her life. When her husbands health failed, she worked at Gimbels Department Store in Milwaukee, then for a number of years as a cook for the Brookfield, WI grade school, and then completed training at Purdue University to become a College Dormitory Head Resident. She served Luther College in Decorah, IA for twelve years as the Head Resident of Larson Hall, and an additional nine years as housemother of Pi Kappa Phi Sorority House on the University of Minnesota Campus in Minneapolis. She loved this type of work and was extremely gifted in listening, counseling and assisting in the development of young college-aged girls. She retired in 1980, and moved to Eau Claire, WI near her daughter Pat. She became an active member of Grace Lutheran Church in Eau Claire and made many friends within the community.

Betty moved to Decorah, IA and became a resident of the Barthell Eastern Star Nursing Home on April 9, 2001. She died there on Tuesday evening, August 16, 2005 at the age of 99 years. 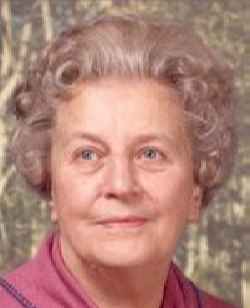