The Family will greet Friends from 10:00 A.M. until the time of services on Wednesday at the church. Fjelstul Funeral Home in Decorah is in charge of arrangements.

Gladys Lorraine Eleanore (Orke) Fjelstul was born September 24, 1920 at home in Calmar, IA, the daughter of Melvin A. and Bertha G. (Stenseth) Orke. She was baptized on October 29, 1920 and confirmed on June 2, 1935 at Calmar Lutheran Church. She graduated from Calmar High School with the class of 1938. She worked at the telephone office in Calmar during high school.

Gladys was united in marriage to Maynard H. Fjelstul on June 14, 1942 at Calmar Lutheran Church by Rev. H. A. Preus. To this union, four children were born: Roger, Barbara, Nancy and Jeffrey.

After their marriage, Gladys and Maynard lived in Waukon, IA for four years, they moved back to Calmar for fourteen years. Then they moved to Oneida, NY and Gladys worked as a teller at Oneida Valley National Bank for eighteen years. In September 1994, they moved to Battlement Mesa, CO and then moved to Decorah, IA in September 2001.

Gladys was very active in church in the communities they lived in over the years, most recently at First Lutheran Church in Decorah. She was an avid bridge player, seamstress, enjoyed doing ceramics and liked to golf.

She was preceded in death by her parents and three sisters: Elaine Williams, Dorothy Hanson, and Avis Greer. 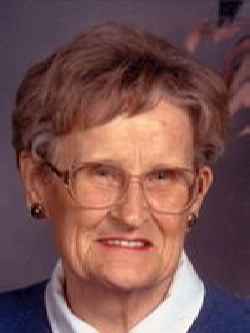