Willliam D. Dave Baker, 79, of Decorah, died Tuesday, April 5, 2011, out on his farm. Visitation began Friday, April 8, at 1 p.m., one hour before the service, at St. Johns Lutheran Church. Memorial service was 2 p.m. Friday, at St. Johns Lutheran Church in Locust, with Rev. Nancy Solomonson officiating. Organist was Connie Bolson. Congregational hymns were What A Friend We Have in Jesus, Precious Lord, Take My Hand and On Eagles Wings. Arrangements were by Fjelstul Funeral Home, Decorah. Online condolences may be made at www.fjelstul.com .

Dave was born Aug. 25, 1931, in Burlingame, Calif., to Russell and Ruth (Robinson) Baker. He was baptized in the Presbyterian Church. Shortly after that they came to Decorah, where he spent most of his life. William David (Dave) graduated in 1949 from Decorah High School. He played football; however, he had a passion for hunting and fishing after school, from which he has shared many stories.

Dave joined the Air Force after one year of college and served as a sharp shooter. He earned the rank of Staff Sergeant. He was awarded the Korean Service Medal, United Nations Medal, National Defense Medal, Good Conduct Medal and two Bronze Service Stars. Dave served until January 1955 when he was honorably discharged.

Dave graduated from Luther College with a degree in economics and a minor in religion. In 1957 he met Marlene Ewing, and they were married May 10, 1958, at University Baptist Church in Minneapolis, Minn. Their marriage was blessed with three wonderful children: David Albert, Deanne Ruth and Joel Arthur.

Dave went on to receive a masters degree in special education from the University of Iowa. He taught special education at the junior and senior high levels. He enjoyed time on his farm milking his beloved Jersey cows, and hunting his land. He spent time fishing on the Mississippi River. Most of all, he loved his cabin on White Earth Lake in Northern Minnesota. He cherished the times when his children and grandchildren would come to visit. The kids all enjoyed the jet-ski, boating and swimming while he sat under the tree and supervised. Dan was Daves yellow lab. They spent many long walks, talks, naps and boat rides together. Dan was by his side when Dave died.

Dave was preceded in death by his parents, Russell and Ruth Baker, and two sister Phyllis Baker and Joan Sproatt.

Memorials may be given to Wellington Place Residential Facility, 2479 River Road, Decorah, IA 52101.

Transcribed from a newspaper clipping submnitted by Janice Sowers 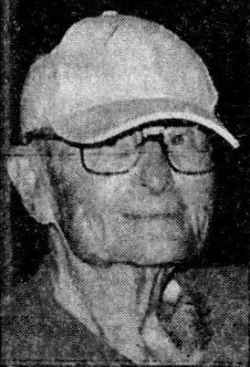