Sandra was born September 13, 1959 in Sparta, WI, the daughter of Charles W., Jr. and Magdalen (Hemmersbach) Schaller. She graduated from Waukon High School with the Class of 1977, received her Associate in Arts degree from Northeast Iowa Community College and then graduated with her Bachelor of Arts degree in Education from Luther College with the Class of 2005.

Sandy was united in marriage to Alan Peake December 3, 1977 at St. Johns Lutheran Church in Waukon. To this union two sons were born, Jeremy and Scott.

She taught in Waukon from 1977 to 1979. Then she and Al started the family apple orchard with the planting of their first trees in 1979. Most of the existing trees were planted in 1982. Sandy and Al moved to Decorah, where they owned and operated Decorah Decorating from 1984 to 1996. During this time she also taught third and fourth grade Special Education at Decorah Community Schools from 1990 to 2002 and 2005 to the present.

Sandy was very active in the choir, bell choir and as director of the cherub choir at St. Johns Lutheran Church in Waukon, and in choir, circle, Sunday school and Vacation Bible school at First Lutheran Church in Decorah before joining Decorah Lutheran Church in 2008. She was a lover of nature, of mountains and biking. She baked, danced and sang. She loved reading (for herself as well as to others), visiting with family and friends, knitting and watching the Packers play.

Waukon, Iowa newspaper, THE STANDARD, January 27, 2010.
Contributor is not related and has no further information. 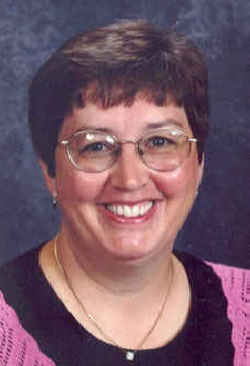