Audrey Marie (Osterhus) Smorstad was born September 18, 1925, the daughter of Milford and Alma (Hauge) Osterhus, south of Ossian. Audrey was baptized October 25, 1925 and confirmed September 24, 1939 at the First Lutheran Church south of Ossian by Rev. Shefueland. She attended school at Dover #6 in Fayette County and graduated from West Union with the class of 1943. Audrey went to work that fall at a restaurant for two years and then moved to Waterloo and worked for Rath Packing Co. in the office, running IBM machines.

December 1, 1948, Audrey was married to Harris L. Smorstad at the First Lutheran Church, south of Ossian by Rev. E.O. Ulring. To this union one son, Gary, and twin daughters, Judy and Joan, were born. They started farming in 1949 at their present farm in Glenwood Township for many years. They also owned and operated a repair shop from 1984 to 2000, when she retired. Audrey was a member of the Pontoppidan Lutheran Church and later joined the Glenwood Lutheran Church. She was active in church circle, ladies aid and had taught Sunday School for many years.

Audrey was preceded in death by her parents, Milford and Alma Osterhus; her husband, Harris Smorstad, in 1994; and three brothers, Ahlert, Otto and Kenneth Osterhus.

The Waukon Standard, July 8, 2009
Contributor is not related and has no further information. 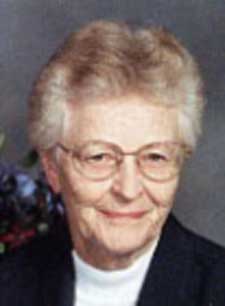