Esther Jeanette Harryman, youngest daughter of Francis S. and Jennie Hill Harryman, was born the 16th day of February 1905 and grew to womanhood at the family homestead near Leando. She departed this life at the Van Buren Memorial Hospital, Keosauqua, Iowa, on Saturday, June 6, 1981 at teh age of 76 years.

Esther attended rural school until the completion of the Douds-Leando Consolidated School, completing her elementary and secondary education there in 1924. After completing Normal Training Course at Parsons College, she began a teaching career. Her first year of teaching was in the same school where her father first taught 36 years before. In addition to teaching in rural schools, she taught in Douds, Milton, Troy, and Davis County Community in Bloomfield ending a 35 year career in 1969. From 1924 to 1962 she acquired college credits from Iowa State Teachers at Cedar Falls, Northeast State Teachers in Kirksville, Mo., Drake University at Des Moines and finally was graduated from Parsons College in 1962.

On the 7th of June 1933 she was married to Joe W. Moore of Rockford, Ill. They made their home on the Moore Family homestead until the fall of 1978 when they moved to Keosauqua, Iowa.

She was a member of the National Education Association (and was honored with a life membership), Van Buren and Davis County Retired Teachers Association, Federated Womans Club, Rebekah Lodge at Troy, Coterie Book Club at Troy, Top Hat Club at Milton and Van Buren County Historical Society at an early age she united with the Leando United Methodist at the time of her death. Through the years she supported the work of the Woman Society of Christian Service, United Methodist Women, and assisted in Vacation Church School.

She was preceded in death by her parents, a devoted step-mother, two brothers, Harvey and Joseph Harryman and a sister, Ruth.

Surviving are her husband, Joe; three brothers, Dewey and Harold Harryman of Douds and Lucien Harryman of Manson, Iowa; two sisters, Mary Loveless of Washington and Josephine Lewis of Selma; many nieces and nephews and a host of friends.

She loved life and all living things. Her generous spirit was poured out upon all - young and old. She lighted many a torch for a child, lightened many a path for another, and even though childless, there was many a child who will rise up and call her blessed.

Interment was in Lebanon Cemetery. Arrangements were in charge of Pedrick Funeral Home, Keosauqua. A memorial was established for the cancer fund and her church. 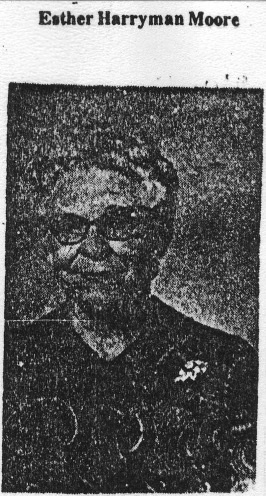