This family story was taken from the Sioux Center Centennial Book of 1991 page 543, it was submitted to the book by John and Daisy Den Herder and Alyda (Den Herder) De Vries. This story was transcribed for this BIOS by Wilma J. Vande Berg and some research notes were added at the end.

Jan Willem Te Grotenhuis born January 11, 1833 immigrated from the province of Gelderland Netherlands in 1871. There were 37 homesteaders in this colony, this included J. W.s sister Naa who later married J. J. Eppink who also came with this colony. Records show there were more members of the Te Grotenhuis family who had immigrated earlier, around 1868, a brother John Henry and a sister Sandrina Hendrieka. Since they settled in a different place with a separate colony they lost track of each other and never get together again. In these colonies several people were related to each other, and names Jan, Willem, Johanna etc. were often repeated. Also marriages between cousins was not uncommon, which today is forbidden. To them it was very important not to lose their identity, religion, or culture in a strange land.

The community that later became Sioux Center, the majority were people were from Gelderland, few came directly from the old Country, a large number came from Greenleafton MN, Pella, IA, Wisconsin and etc. J. W. TeGrotenhuis came from Greenleafton, MN and later they settled in Sioux County, where they heard land was still available. They came in covered wagons with oxen and horses. Mr. and Mrs. A. J. Klevers were also with this group and their daughter Janna Hdnrieka Kleuvers later married J. W. Te Grotenhuis in 1872, he was 20 years older than she was. Mrs. A. J. Keuvers was the first adult buried in the Sioux Center grave yard, Mr. A. J. Klauvers, Janna Hendriekas father, drowned in the Rock River in 1874, when he and a friend went to hew some trees along the banks for fuel and building purposes. They got caught in a whirl-pool in the river and lost their lives.

J. W. Te Grotenhuis was a stern man, and a good business-man and farmer. He was not afraid of work, and took advantage of the land tree claims the government had to offer. (See J. H. Den Herder Story) He accumulated a lot of land this way. This work was done with crude machinery and oxen and horses on these open prairies and creeks. Many trees were planted a mile west of south Sioux Center and a mile north. There was a 20 acre plot of tall cottonwood trees. This was a popular picnic place for church and family picnics, it was called Grotenhuis Grove. The roadside was also lined with trees, it was called lovers lane. Couples on dates parked their horse and buggies there, for a bit of privacy from their teasing younger brothers and sisters. There were always pranksters around also, and when you hitched your horse at the church horse barns you better check out your buggy seat, there could be a few eggs under the blanket.

On the southeast corner of the section, one mile west of Sioux Center, which today is the home place of Garold De Herders, used to be the school ground of West Branch No. 2, which dated back to 1882. It was permanently closed at the end of 1958-59, it being one of the oldest schools in the vicinity, Mrs. Ed Te Veltrup was the last teacher. But before all this in 1907, Gerrit Jan, son of J. W. Te Grotenhuis was killed cutting down a tree. Noticing the tree was not falling right, and not heeding the warning of others, scrambled up the tree to tie a rope on a branch, when the tree toppled and fell on him and killed him.

Mrs. Hendrieka Te Grotenhuis was a deeply religious lady, who when she grew old, spent a lot of her time reading her Bible, and religious books. Rev. Seine Bolks was very dear to her. She asked nothing for herself, and John remembers her as always wearing the same black dress until her children insisted she needed a new one. She also darned many many socks. When she got old and could no longer care for herself, her three married daughters cared for her in their homes, three months at a time. She died in her sleep in 1939 in the home of her daughter Sarah. (Mrs. John Van Roekel)

J. W. Te Grotenhuis retired and lived to be 88 years old. He loved horses and owned fine fancy ones. This love for horses has carried through in the generations following him. There were and still are many horse lovers both boys and girls in the families. We call it the Grotenhuis blood in them. J. W. Te Grotenhuis died in 1921 and Henrieka died in 1939 at 87 years of age. He was twenty years older than she and she lived 21 years after he died.

The Children of Jan Willem Te Grotenhuis and Hendrieka Kleuvers

2.Arend Jan John Te Gortenhuis (Jan 23, 1876-1972) married Pauline Struurop. They were from Sioux Center area and were farmers who had quality livestock, a milk route, and also was a butcher. Their children were William, Ethel, Harriet, Wallace, Marvin, and Hendrene.

7.Jan Willem Bill Te Grotenhuis (April 9, 1889-1966) married Hattie Struurop. He loved horses, had a gas station, sold cars and had one of the first trucks. They had two children, Audrey and Stanton.

Above submitted to book by John and Daisy Den Herder and Alyda DenHerder DeVries.

OBITUARY of Jan Willem Te Grotenhuis 1833-1921
John Willem Te Grotenhuis born 11 Jan 1833 Gelderland Netherlands died 25 Jun 1921 Sioux Center IA. He was married to Janna Hendrika Kleuvers 1850-1939. John was the son of John Hendrik Te Grotenhuis 1791-1869 and Aleida Reijmers 1797-1861.
Alton Democrat July 2, 1921
Mr. Te Grotenhuis of Sioux Center One of Countys Earliest Pioneers
Once owned 25 Eighties.
J. W. Te Grotenhuis Passes on in his 88 Year one pioneer still left.
Last Saturday evening Mr. J. W. Te Grotenhuis passed away after months of suffering from the infirmities of old age. Funeral services were held Tuesday in the First Reformed church at Sioux Center. Rev. Lubbers and Rev. James De Pree delivering appropriate addresses.
Jan Willem Te Grotenhuis was born in Gelderland. The Netherlands, Jan 11, 1833 and had therefore passed his 88th birthday. At the age of about 25 years he came to America and lived in Wisconsin for two years. Following the western pioneer he homesteaded on the section one mile west of Sioux Center and at once became a buyer of land. The farm where Mr. De Goei now lives he acquired for 25 cents an acre and his son, Will who now owns the farm refused $800 an acre for it in 1919.
Mr. Te Grotenhuis lived on his homestead for fully 40 years and raised a family of sturdy sons and daughters. He amassed a large estate of Sioux County land at one time owning 25 eighties.
He belonged to the group of pioneers who have almost entirely passed away. J. W. Te Grotenhuis, J. W. Eppink, D. W. Doornink, Gerrti Zuetenhorst, Hein Mouw and Ben Mouw all neighbors in the early eighties and of them all Ben Mouw is now the only survivor.
A Widow survives the two sons, John and William and four daughters Mrs. Anna Punt, Mrs. Lena Peelen, Mrs. Hattie Den Herder. One son Gerrit was instantly killed 13 years ago last April by falling from a tree.
A large number of people attended the funeral which was held at 1:30 p. m. from the home and at 2 oclock from the church. The pall bearers were Ben Mouw Sr., H. Naberhuis, B. Campagne, C. De Groot, H. Kiel and Henry Wandscheer. Burial occurred at the Sioux Center cemetery.

OBITUARY of Janna Hendrika Te Grotenhuis born 23 Mar 1850 Winterswijk Gelderland Netherlands and died 8 May 1939 Sioux Center, Iowa
Sioux Center News of Mary 11, 1939 page 1
Mrs. J. W. Te Grotenhuis passed away quietly though unexpectedly at the home of her daughter and family Mr. and Mrs. John G. Van Roekel, early Monday morning May 8th, at the age of 89 years. Funeral services will be held Thursday at 1:30 from the home of Gerrit De Herder and 2 p.m. from the First Reformed Church with Rev. R. Meengs, assisted by Rev. B. D. Dykstra of Orange City, officiating. Mrs. Grotenhuis was the last charter member of the First Reformed Church which was organized here over 60 years ago.
Johanna Hendricka Fluvers (Kleuvers) was born at Winterswijk, Gelderland, Netherlands, March 23, 1850 and came to this country in 1872, settling at Greenleafton, and later coming to Sioux County where she was married to John William Te Grotenhuis on Feb 10, 1873. Nine children were born to this union. Two dying in infancy. One son Gerrit died April 9, 1908, and one daughter Mrs. Cornelius Punt, Sr., died Sept 3, 1932. The five surviving children are Arend John of Sioux Center, and William of Oakland CA, Mrs. Herman Peelen, Mrs. Gerrit Den Herder of Sioux Center and Mrs. John G. Van Roekel of Hull.
Mrs. William Pronk is the only surviving sister. There are 34 grandchildren and 29 great grandchildren. 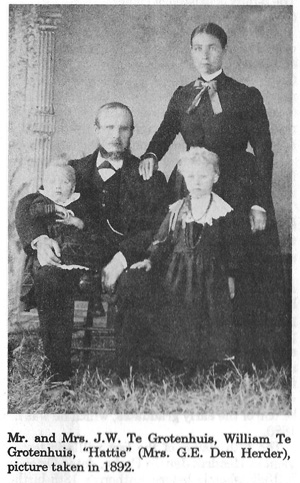