The information for this BIOS was accumulated from the BIOS of Anthony Te Paske and from records of the Netherlands (www.wiewaswie.nl) pertaining to his birth, marriages, deaths of wives and children, and prepared and submitted by Wilma J. Vande Berg. Read the BIOS of the Anthony Te Paske family which gives much historical input into the immigration of the family of Hendrik Jan Te Paske and their early pioneer life in the United States.

MARRIAGE #1  of Hendrik Jan te Bokkel, a farmer, age 36 and Dela Antonia Tammel age 23 on 24 March 1853 at Aalten, His parents were Derk Hendrik te Bokkel and Harmina Berkelder, Her parents were Jan Tammel and Johanna Adriana Hoftizer. Due to his age, looked for a previous marriage but didnt find one.

MARRIAGE #2 record of Hendrik Jan te Bokkel (AKS Te Paske) a farmer age 51 married Gesina Tammel age 20, His parents were Derk Hendrik te Bokkel and Harmina Berkelder, her parents were Jan Tammel and Johanna Adriana Hoftijzer. They married 11 July 1867 At Aalten, Gelderland. He was a weduwnaar of Dela A. Tammel. Dela Antonia Tammel was a sister of Gesina Tammel being born 25 Mar 1829 at Aalten Gelderland, to Jan Tammel and Johanna Adriana Hoftijzer.

DIED  Gesina died at Greenleafton Minn in Feb 1874 after giving birth to son Gerrit who died also.
It seems there was a few years the family went from surnames Te Paske to Te Bokkel back to the Te Paske name. Many times the surnames had to do with where they were living and the land ownership at the time.

DEATH of Hendrik Jan
Source: Find A Grave
Born: May 16, 1816 Died: December 28, 1886
He is also found in records in the Netherlands under the name of Hendrik Jan Te Bokkel--Bokkel was his birthplace in Aalten. He married #1 Dela Antonia Tammel on 24 March 1853 in Aalten, Gelderland. Dela was born 25 March 1826 in Aalten, daughter of Jan Tammel and Johanna Adriana Hoftizer. Dela died 4 January 1865 in Barolo, Aalten, Gelderland.
He married #2 Geziena Tammel on 11 July 1867 in Aalten, Gelderland. Geziena was born on 18 February 1847 in Aalten, Gelderland, daughter of Jan Tammel and Johanna Adriana Hoftizer. Geziena died on 31 March 1874 in Greenleafton, Fillmore Co, Minnesota.
He married #3 with Johanna Harmina Jans Van Maassen who was born on 15 July 1820 at Oudwoude, Friesland. Johanna's parents were Jan Van Maassen and Grietje Endeman.
He immigrated to the United States on 13 July 1868.
Hendrik's birth record found on FHL, Civ Reg, Gelderland, Aalten, Geboorten 1816-1819, image 16 of 129. His parents are Derk Hendrik and Harmina Berkelder

DEATH OF JOHANNA HERMINA MRS. H. J. TE PASKE 1820-1893
From the Alton Democrat of Dec 30, 1893
The funeral of Mrs. A. (H.J.) Te Paske occureed at the Reformed church in this city last Saturday, Rev. Lepeltak, Officiating. The remains were interred at the Orange City Cemetery. The deceased reside with Mr. Vennema south west of town.
(Actually it was found that this was Mrs. H. J. TePaske, She was Johanna Harmina Massen born 15 Jul 1820 in Friesland to Jan van Maassen and Grietje Endeman. She was first married to a Willem Lykeles Wiersma in 1840 at Kollumerland, Friesland, Netherlands. A J. Wiersma, son, acknowledged her death in the Volksvriend newspaper of Dec 28, 1893.

1.Derk Jan John TePaske born 5 Jan 1854 Aalten. He married Hukje Vander Schaaf on 16 Feb 1882. Indications are that they moved to Harrison So. Dakota as mentioned in the Harrison news of May 18, 1899 of the De Volkvriend. Dirk J. Tepaske, lived in So. Dakota many years. died 7 Mar 1931 at Warsau, Wisconsin.

2.Harmina Mina Te Paske born 24 Nov 1855 Aalten. No indication of her after the 1870 census. She is not listed in the 1880 census of Sioux Couty. She may have married in that time period and moved away or she may have died. She was not listed in the church membership records in Orange City. One entry on My Heritage.com states she died at Greenleafton MN but no date.

5.Johanna Mrs. A. J. Pennings born 5 Dec 1859 Aalten, Gelderlands, Netherlands married 1879
Marriage record of Nov 23, 1877, married Arend Jan Pennings 45 she was 23 in Orange City by Rev. Bolks
Obit of Johanna
From the Alton Democrat of March 22, 1890
Mrs. A. J. Pennings died at her home two miles south of town last Saturday of pneumonia. She had been sick but a short time, having been in attendance at her brother's bedside since he had been taken ill two weeks ago.
He was on a fair way to recovery when she was taken sick and died. The funeral occurred Tuesday and was one of the largest ever held in Orange City.
(From the 1885 census and an ancestry.com report.) Arend Jan Pennings was born 14 April 1852 Aalten Gelderland Netherlands. He married Johanna TePaske 1879, she was born 5 Dec 1859 Aalten G. Neth. She was the daughter of Hendrik TePaske and Dela Tammel. They had four children Gerrit 1878, Henry 1882, Gertrude 1885 and William 1888.)

9. Herman TePaske born Oct 10, 1871- died Jun 6, 1937 1937
Obit of Herman TePaske From the Alton Democrat, June 4, 1937:
Former Auditor Te Paske Is Very Ill
Brief article about him suffering a severe stroke last Wednesday. It rendered his right side completely helpless and he has not yet recovered his speech. He can move his left arm and leg but a week after the stroke his mind appears to be still clouded and he does not yet respond to questioning, although he can take nourishment fairly well. For many years he has devoted close attention to book work. A trained nurse is in constant attention.
* * * * * * * * * *
From the Sioux Center News, October 10, 1937:
HERMAN TE PASKE
Well Known Sioux Countian Passes Away
Herman Te Paske, city clerk of Orange City, passed away Sunday, June 6th at his home after suffering a stroke on May 26th, at the age of 65.
Herman Te Paske was born in Greenleafton, Minn. in 1872, coming to Sioux County in 1874, where he resided until he died. He taught school nine years, the last three of which he taught in Sioux Center school. He worked in the county auditor's office 12 years, 6 as deputy under John Boeyink and 6 as auditor. He was subsequently assistant cashier at the Northwestern State Bank in Orange City. At the time of his death he was city clerk of Orange City. His wife preceded him in death 10 years ago, and he is survived by four children, Agatha and Johanna of Orange City, Henry of Sioux Center, and Bernard of Pennant, Ia., and one brother, Anthony, of Sioux Center.
Mr. Te Paske will be sorely missed in a community where his constant industry and activity made innumerable friends. He was one of the directors in the First National Bank of Sioux Center. Always an active church member, he was a deacon in the consistory of the American Ref. church at Orange City at the time of his death.
Funeral services were held Wed. in the Am. Ref. Church. Rev. Natress officiated.
* * * * * * * * * *
From the Sioux County Capital, June 10, 1937:
OBITUARIES  Herman Te Paske
Herman Te Paske passed away at his home Sunday June 6 at 8 p.m. at the age of 65 years and 8 months. He suffered a paralytic stroke ten days ago from which he failed to rally.
He was a son of the late Mr. and Mrs. H. J. Te Paske. He was born at Greenleafton, Minn., in 1871. In 1874 he came with his parents to Sioux County and they settled in Orange City where he obtained his public school education. After his graduation from the Northwestern Classical Academy he taught school for a number of years. Later he served as county auditor and also served as assistant cashier in the Northwestern State Bank for a number of years. At the time of his death he was serving in the capacity of City Clerk, an office which he had held for several years.
On April 23, 1903 he was married to Miss Elizabeth Vander Aarde. She died in 1927. He is survived by four children, Henry Te Paske of Sioux Center, Agatha at home, Bernard of Tennant, Ia., and Johanna who just graduated from Morningside college, Sioux City. He is also survived by one brother, Anthony Te Paske of Sioux Center, one grandchild and his mother-in-law, Mrs. B. Vander Aarde who lives with the family.
Funeral services were held Wednesday at 1 oclock at the home and 1:30 at the American Reformed church of which he was a member and where for several years he served as an officer. Rev. L. Nattress officiated. Interment was made at the local cemetery.
* * * * * * * * * *
RESEARCH NOTES
An obituary containing the same information was published in the Alton Democrat, June 11, 1937.
His death certificate (informant Henry J. TePaske, Orange City) also gives his birth date as October 10, 1871; parents Henry J. Te Paske and Gezina Tammel, both born in the Netherlands. Died at 7:50 p.m. June 6, 1937; cause, cerebral hemorrhage, May 26, 1937; contributory cause, arterio-sclerosis, onset 1927.
FindaGrave.com shows him buried in West Lawn Cemetery, Orange City, with a photo of his headstone showing his birth (Oct. 10, 1871) and death dates. Parents Hendrik Jan Te Paske (1816-1886) and Geziena Tammel Tepaske (1847-1874). Siblings Johanna Adriana Te Paske Pennings (1859-1890) and Derrick Anthony Te Paske (1868-1946). Wife Elizabeth Van Der Aarde Te Paske (1875-1927, married 1902). Three children listed: Henry John Te Paske (1904-1984), Agatha C. Te Paske Bolluyt (1905-1959), and Johanna Dorothy TePaske Rock (1914-2002). There is a photo of him as deputy auditor.
The Sioux County marriage register for 1903 gives their marriage date as 23 April 1903 at Orange City, and his parents as Henry John Te Paske and Gerzeina Tammel. He is deputy county auditor, age 32. Elizabeth is age 28, parents Bastiaan Van der Aarde and Agatha Eriks.

There are no pictures available to the complier of this BIOS, of the father Hendrik Jan Te Paske and as a family.

Found a picture of his daughter Johanna Te Paske Pennings family in the Orange City Centennial book of 1870-1970 page 58.

Pictured from left to right with narrative.
Arend J. Pennings left the Netherlands in 1868, was shipwrecked enroute but eventually arrived in America in that year, establishing himself first in the vicinity of Greenleafton, MN. In approximately 1874 he settled in the vicinity of Orange City, Iowa where he lived to the day of his death. The Pennings farm is one mile west and two and one half miles south of Orange City. 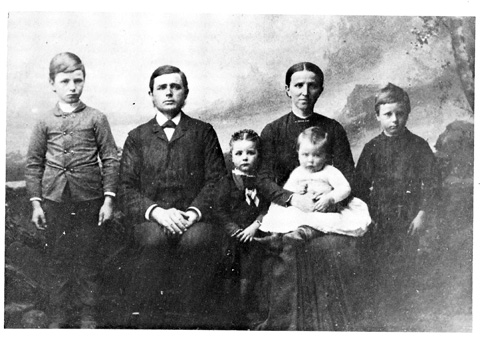