This story was taken from the family story in the Sioux Center Centennial Book of 1991 page 541 and submitted to that book by Adrianna Doktor. It was transcribed for this Bios by Wilma J. Vande Berg and some research notes were added.

The Southerner, a ship from Rotterdam to New York sailed the ocean for 55 days in 1846. On board were 107 Dutch people, each paying $14.00 for the trip besides bringing their own food. Among the passengers was Rev. A. C. Van Raalte who led the settlers to a piece of land in Michigan named Holland.

Evert Zagers and wife (grandparents of Helen) were also on board, but wife died enroute so was buried at Sea. Later , in Michigan, Evert married Helen Poppen and they had six children, one of whom was Aaltje, (Helens mother) Aaltje married Geert Deiters and one of their daughters was named Helen. Helen Deiters was born in 1868 at East Saugatuck, Michigan, where she spent her early years.

Steven Snieder, born in 1862, was the son of Steven and Jennie Moss Snieder. He was born in Germany where his parents remained while he emigrated to America. He settled in Michigan and worked at a lumbering camp in Lucas with Helens brother Henry. Helen and Steven met when Henry brought him to the Deiters home.
They were married in 1889 at Fremont and later moved to Cawker City, Kansas. There their three sons and tree daughters were born, Harm, George, Jennie, Alice, Bertha and Henry. In 1902 the Snieder family moved to a farm near Ireton, IA.

Helen was an active, spirited woman. With a busy family of her own, she usually boarded the teacher from the one room school down the road. She also went on shopping excursions, taking the train to Sioux City. She would buy needed items for the entire family that would include hats, shoes, and coats. Helens parents were living in Michigan so she would often visit and assist them due to their poor health.

On one occasion , Steven went to Germany to visit his relatives. While he was gone, Helen thought daughter Alice should have organ lessons since she dis played musical ability. There was no money available but Helen was determined. She solved the problem by selling the hogs and purchasing a new pump organ.
It was in the year 1922 that they moved into Sioux Center. During the years of the flu epidemic, Helen went from home to home assisting with the sick and dying. Among the many relatives and friends who died during that time was their daughter in law, Jennie, Georges wife. Helen also traveled with Dr. Maris to assist births, and would usually stay with the family until the mother became stronger.

Helen was very fond of planning parties. The occasion night be a welcome for visiting relatives from Michigan, dinner during the holidays, or probably designated weeks during the summer when the grandchildren would stay for several days. These times would find Steven, sitting in his chair, smoking his pipe and quietly observing the activities.

They were members of the Second Christian Reformed Church, presently Bethel, in Sioux Center when they passed away. Steven died Nov 7, 1949 after 60 years of marriage. Helen was 92 years old when she died on Jan 23, 1961.

OBITUARY of Helen (Mrs. Steven) Snieders 1869-1961 Spellings vary Sneider, Snieder, Snieders etc.
Source: Sioux Center News (1-26-1961)
Born: October 10, 1869
Died: January 22, 1961
Funeral services were held for Mrs. Helen Snieders, 91, Sioux Center resident, yesterday (January 25) at the Bethel Christian Reformed Church here.
She passed away Sunday following an illness of several months duration.
Burial was made in the Sioux Center Community Cemetery. A brief service was held at the Little Chapel preceding the service at the church.
Mrs. Snieders was born October 10, 1869, daughter of Geert and Aaltje (Zagers) Dieters at East Sagatuk, Michigan. She married February 17, 1888, to Steve Snieder at Fremont, Michigan. They came to this community in 1902 and resided on a farm west of Sioux Center until 1919 when they moved into town.
Mr. Snieder preceded her in death November 7, 1949.
Survivors include two sons, George and Henry, both of Sioux Center; three daughters, Jennie (Mrs. John Byker) and Bertha (Mrs. Gerrit Klyn), both of Grand Rapids, Michigan and Mrs. Albert De Witt of Hull; a brother, Albert Deiters of Fremont, Michigan, 28 grandchildren and 88 great-grandchildren.
Besides her husband, she was preceded in death by two sons, Henry, who died at age 2, and Herman who passed away at age 32, three brothers, and two sisters.

OBITUARY of Steven Snieders 1862-1949
Source: Sioux Center News (11-10-1949)
Born: August 4, 1862
Died: November 7, 1949
Mr. Steven Snieders, 87, passed away at the Methodist Hospital in Sioux City on Tuesday Nov. 8, 1949. He had fractured a hip in a fall last Thursday morning and was taken to the Sioux City hospital.
Born in Georgsdorf, Germany in 1862, Mr. Snieders came to America when 18 years old. In 1888 he was married to Helen Deiters at Fremont, Michigan. They farmed in Kansas and came to Iowa in 1903.
He is now survived by his wife and five children, George, Jennie (Mrs. John Byker), Alice (Mrs. Albert De Wit), Bertha (Mrs. Adrian De Wit) and Henry. He is further survived by 29 grandchildren and 23 great-grandchildren.
He was preceded in death by two children, Henry and Herman.
Funeral services will be held on Friday afternoon, November 11 at the Second Christian Reformed Church. Burial will take place at the local cemetery. 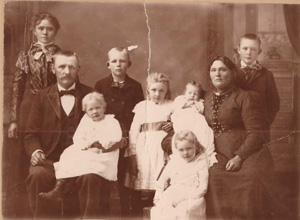