From the Sioux Center Centennial book 1870-1991 A People With Convictions page 328-329
Submitted and complied by  Wilma J. Vande Berg
Authored by John Ellerbroek of Fairmont MN and by way of other descendants, including Kay Munmert .

The older residents of Sioux Center will surely remember their elders refer to the Ellerbroek Store that was established in Sioux Center in 1891 and continued in business in Sioux Center until 1926. Many advertisements were published in the Sioux Center Newspaper of the time advertising the general goods the store had to offer.

John Ellerbroeks father Gerrit Ellerbroek left Holland along with Gerrits sister and husband Jan Akkerman and wife Anna Ellerbroek. They crossed the ocean in the ship. Pieter Flories from the port of Amsterdam in April of 1947, they landed in Baltimore, Maryland. In an article in the 1941 Jubilee Edition of the Sioux Center News it states that the trip from Amsterdam to Pell was made under many difficulties.

Gerrit Ellerbroek worked as a single farmer near the Straw City of Pella, Iowa. Gerrit Ellerbroek and Jan Akkerman came to Pella about the same time as Rev. Scholtes ban, and helped establish the center of Dutch culture. The Akkermans established themselves as successful cattle farmers in the Pella area.

In 1849, Gerrits widower father, Pieter Ellerbroek, came to Pella with four children, two of his children were already in Pella, and one daughter Elizabeth (Kooyman) had stayed behind at Horn, Holland. In 1850, Gerrit and his father were married in a double ring ceremony in Pella. Gerrit married a widow Jannethe (Vander Meer) De Fries, she had one child Issac De Fries. Three children were born to Gerrit and Jannetje Ellerbroek; Jan born Feb. 29, 1853, Peter, and Mary. In about 1868 Gerrit died and again Jannejte was a widow. She then married Lutje Mars and of the marriage three more children were born; Pieter, twins Simon and Alida Mars. The total family of children now numbered seven with three surnames.

Lutje Mars decided to take the whole family and join the wagon train which was going to Oregon to seek gold and a better life, so his wife Jannetje sold her farm at Pella to finance the trip to Oregon. Jan John Ellerbroek was about 12 years old at this time. The wagon train reached Oregon on Oct 28, 1864 after six months of traveling, dodging and fighting the Indians and renegades. The Prairie Schooner was powered with five yoke of oxen.
The Lutje Mars family stayed in Oregon only about four or five years and returned to Pella by way of the newly completed Union Pacific Railroad. Next the Lutje Mars family moved from Pella to Sioux Center, Iowa. John Ellerbroek as a young man ended up in Sioux County also, and worked on a farm for a few years. He then opened a store for fancy goods and toys in Orange City, Iowa. Here John Ellerbroek married Maria Vander Stoep on Jan 9, 1880. She had been born Sep 5, 1863 at Pella Iowa. Her parents were Andries Vander Stoep and Johanna Harbers of Orange City.

For a few years the young John Ellerbroek family and his mothers family moved to Armour, South Dakota, to escape the grasshopper plagues of Sioux County, Iowa. However, before long John and his family came back to Sioux county. In the Sioux County Herald of Jan 6, 1891 it states that John Ellerbroek and Floris Vander Stoep had opened a toy and fancy goods store and a restaurant in Sioux Center, John and Mary spent most of their lives operating the store.

John ran the store and Mary tended the restaurant, would often sack coal for farmers and had a farm sale lunch wagon. This wagon had gunny sacks filled with tin cups, several big coffee pots, doughnuts, cookies and sandwiches. As if that wasnt enough, she also took in boarders in their home, in addition to raising six children. One boarder was Charles Brocke the photographer.

After his wife Mary died John retired and moved to the new Holland Home in Sheldon. Mary Ellerbroek died April 20, 1922 and John Ellerbroek died Sept.28, 1932. Both he and his wife are buried in the Ellerbroek plot in the Sioux Center Cemetery. His mother, the unsung pioneer heroine, Jannetje Vander Meer De Fries Ellerbroek Mars is buried there also.

The children of John Ellerbroek became merchants and at one time all the brothers and sister operated a chain of successful stores in Iowa and Minnesota.

The children of John Ellerbroek were as follows:

Gerrit Ellerbroek was born Nov 16, 1881, married Hattie Beernink, He was educated in bookkeeping and went to work at the Balkema General Store in Sioux Center, and was on the first school board of Sioux Center, He later was in business in Sheldon, Iowa. They had two children; Vernon Ellerbroek and Willmer Ellerbroek.

Andrew Ellerbroek was born July 21, 1884, married Sietje Schierpbier. He was a twin at birth but the other child died. After a colorful life of living various places and operating several family stores and other adventures form Idaho to Minnesota, where they settled in Fairmont, Minnesota, where they settled in Fairmont, MN. Their only son was John A. Ellerbroek currently living in Fairmont, Minnesota and the original author of the manuscript from which most of this historical information was obtained.

Pieter Ellerbroek was born March 17, 1886, married Mary Punt. They first farmed and then came to Sheldon and worked in the Ellerbroek Bros. headquarters store which was a distribution point for the other stores. They had one child John M. Ellerbroek.

Frank Ellerbroek was born May 28, 1891, married Mabel Hornstra. They were involved in the family business in Sheldon. They were the parents of three children: Hazel Ellerbroek, Esther (Mrs. Adolph Vestergaard and Ruth Valmy Stump.

Johanna Ellerbroek was born April 7, 1896, married Bert Vande Brake. They had a drugstore in Rock Valley, Iowa and later opened the Ellerbroek Store in Fairmont, Minnesota. They had no children.

The descendants of John Ellerbroek have scattered far and wife, but many of them continue in the merchandising business.

This history was first learned of by the complier through Lyle and Mary Kay Mummert of Cherokee, Iowa. Mary Kay was a granddaughter of Gerrit Ellerbroek the oldest child of John. Her father was Vernon Ellerbroek. She had a copy of the manuscript done by John Ellerbroek of Fairmont, MN, hence this resulting story.

This obit was recorded at the time the Sioux Center News was in Dutch.
Sioux Center Nieuwsblad of Apr 19, 1922 In Dutch
Translation attempt:
On Monday night, died at Cram's hospital in Sheldon, Mrs. Ellerbroek Sr. More than three months ago, she underwent surgery for a woman's ailment and had not been out of hospital again. The operation was successful but the effect of the ether on the lungs was from those consequences that pneumonia developed. There always hope for recovery and was thought to be really slow improvement, in the last days there was an adverse reaction and death followed Monday night. Mrs. Ellerbroek reached the age of 58 years. She is survived by her husband, 5 sons and a daughter. The funeral will take place Thursday at two o'clock from the Central Reformed church.

Source: Rock Valley Bee (5-5-1922)
Born: 1861
Died: 1922
The Ellerbroek Ready to Wear store was closed all day Thursday on account of the death of Mrs. John (Mary) Ellerbroek, Sr. of Sheldon, Iowa.
Mrs. Mary Ellerbroek underwent an operation at the Sheldon Hospital in January from which she never recovered.
She was fifty-eight years of age. Her parents are Andres and Johanna (Harbers) Vander Stoep. She is mother of Mrs. Bert VanderBrake and Mr. John Ellerbroek, Jr. of Spencer, and Mr. and Mrs. VanderBrake and Mr. and Mrs. John Ellerbroek, Jr., were present at the funeral services held at Sioux Center, Iowa. She was buried in Memory Gardens Sioux Center, Iowa. 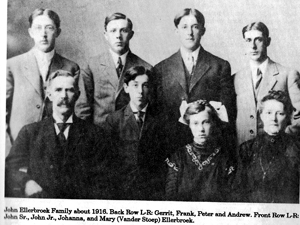