The mother, of William and Henry Sandbulte and other children who will be mentioned, was Johanna Loverkink. She had a diary from which many of the details and quotes were taken. Her diary is known as Grandma Sandbultes diary.

Johanna and a sister were born to a couple in Gelderland, in the Netherlands, who had been married before. He was a widower with 3 children and she was a widow with one child. They lived in a poorly hut. In the year 1870 Johannas father was taken in death because of cancer of the mouth. The mother was left with 2 married children and 4 still at home. Derkjan, a step son, blinded after scarlet fever complications, Gerrit, her own son, who was plagued with epileptic spells, earned a living caring for the farmers cows (he later died in a stock tank, while under a spell and unable to help himself) and then there were the two little girls Derksken and Johanna Harmina named after their parents.

Derksken, the 8 year old, went out working caring for cows, and Johanna was left at home to go to school and care for her blind brother. They had home chores and Johanna writes so I always had to go everywhere with my blind half brother. The mother had to go out working every day to earn a living for her children. Sometimes she would be so tired, she would say, child, my legs are trembling under me but, her testimony to her children was translated into English,  The person who trusts in the Lord, surely didnt build his trust on shifting sand.

Johanna tells of her strict Christian catechism and upbringing in the Christian School. But she enjoyed her music and dancing days until one day.  I heard the death clock church bells for a (funeral ) ringing and that scared me. I fell on my knees and said, Lord Jesus convert me.

I was in her days of working for other people that she met Johan Sandbulte. When Johans mother died and his sister got married, Johans father became desperate for a home. So on July 5, 1885, after much advice and discussion they stepped into the marriage boat ( a Dutch saying) and moved into the home of Johans father.

The couple was blessed with two daughters Johanna Alyda and Johanna Harmina. Then Johans father suddenly became very ill and a week later, he was not with them any more. The following year in June of 1889, Johan and Johanna went to America because there was no industry in Holland and no way to earn a living.

The Sandbulte name comes from the sand hills near the German border where the family had lived. Two of Johns brothers, Wilhelm and Hendrik, moved into Germany, while the rest of the family came to the US. During the 2nd World War, life became hard and they called upon their American relatives, who responded by sending boxes of groceries and clothing. A sister, Hendrika, decided to settle in Saratoga NY, Aaron, John and Herman settled in Northwest Iowa.

A J. Te Grotenhuis in America befriended and greeted the family. He had bought land in 1870 in Sioux county for $5 or $10 an acre. He helped the family in many ways, with renting land, rented the use of his horses, and helped with food and supplies. He encouraged Johan to buy land which was selling for about $30 an acre in 1892. This proved to be a wise decision because in 1899, land was 45, an acre. In 1902, land was $75, an acre and in 1907 land was up to $200 and acre and the price of land products was not climbing in proportion to the land jumps.

The family soon consisted of 5 daughters, Johanna Alyda, (Hannah Wolfswinkle), Johann Harmina, (Minnie Schenk); Annie , (Annie Redeker) , Hattie, (Hattie De Groot)and Dena, (Dena Wesselink). It was with great joy that a son, Willem, was born to them on Oct 10, 1895. Grandma Johanna writes, I was afraid that I might be too demanding in prayers, should it be a girl again, that I would be spared of resentment or grudge against the Lord, or be disappointed, but the Lord, did give us a son and I hope he may live to the honor of God and the good and salvation for his descendants and be a good example for everybody. The blessings continued with the birth of John, Hendrik and Gerrit followed by a daughter Marie Remmerde.

In 1914, son John died at the age of 16 from Typhoid Fever. Three years later husband Johan died of a heart attack while covering the well with manure for the winter. One year later her daughter Dena died from the flu, Annie died in 1927 following appendix surgery and Hattie died in 1933 of complication from pregnancy. Johanna kept on farming with her sons, Will, Hank and Gerrit and they did well.

Submitters additions:
OBITUARIES found on www.iagenweb.org/sioux
Source: Sioux Center News (6-19-1941)
Born: August 19, 1864
Died: June 13, 1941
Mrs. Johanna (Lovink) Sandbulte 76, died at her home at Carmel, la, Friday afternoon, following a lingering illness.
Mrs. Sandbulte, was born, at Varseveld, Netherlands on August 19, 1864. She came to America some fifty-two years ago. The past twenty-one years she had lived in Carmel. On July 4, 1884 in the Netherlands she was married to Mr. Johan Sandbulte and to this union tea children were born.
Those who preceded her in death were her son John who died February 29, 1914, her husband who died Dec. 7, 1917, and three daughters, Mrs. Dick Wesselink, December 29, 1913; Mrs. Matt Redeker, November 13, 1927 and Mrs. John De Groot, June I9, 1933.
She leaves to mourn her loss the following children, Mrs. Henry Wolfswinkel of Carmel, Mrs. C. Schenk of Doon, Iowa, William, Henry, Gerrit and Mrs. John Remmerde all of Carmel. She also leaves 46 grandchildren and 15 great grandchildren.
Funeral services were held Monday at 1:00 P.M. from the home of Mr. and Mrs. Henry Wolfswinkel and at 1:30 from the Carmel Reformed Church. The Reverend Mr. G. Bos officiated. Burial was in the Carmel

Source: Alton Democrat (12-15-1917)
Born: October 7, 1859
Died: December 7, 1917
Last Friday occurred the death of Johan Sandbulte northwest of town at the age of fifty-eight years.
He had been suffering from heart trouble for a couple of years and while at work on the yard he was found dead. He was born October 7, 1859 and in 1885 he was married to Johanna (Lovink) Sandbulte.
The funeral took place Monday at Carmel and burial was at Carmel Reformed Church Cemetery, Carmel, Iowa.

Submittere notes  This Pedigree information below was retrieved from the site www.genealogie.nl and the research was done by others in the Netherlands, and not confirmed by the submitter, considered secondary sources. 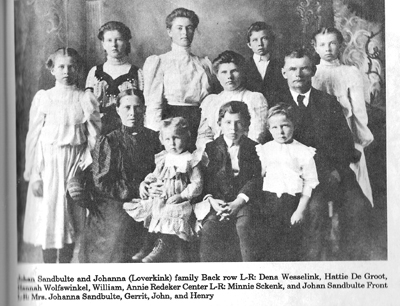