Submitters book Vande Berg published 1995 has an outline of the family of Jan DeZeeuw as follows:

Source: Alton Democrat issue of 4 April 1914, Sioux Center column.
Last Saturday occurred the funeral of John De Zeeuw, who had been sickly for the last few months. He was for years an elder in the First Reformed church and was highly respected. He leaves a large number of relatives and friends....loss. [obscured by tape in old newspaper]

Sioux Center Nieuwsblad of April 1, 1914 In Dutch  Attempted translation
Jan De Zeeuw  At the age of about 70 years, there is a heartbroken widow, 10 children, all adults and some married, two brothers and one sister. Born in Nederland, South Holland province, he came to Pella, Iowa in 1870 as a youth with his parents, and in 1871 to Sioux County, where the family settled near Middleburg. So he was one of the pioneers. In 1876 he married Driesje Sneller, who now survives him with her children, first in Alton, they have lived at the Sioux Center the last 29 years older and were all those years members of the Reformed Church.

From childhood the deceased brother feared the Lord and wanted to do for Him. He also sought to do this, as he sometimes complained about the imperfection of that service. He served the congregation for twenty years as a faithful member and capable elder. He sincerely wanted to win others to Jesus and lured them with the sweetness and fairness of the Lord's service, which he himself felt. He was given a firm confidence. He knew in what he believed.

In his own household, he was regarded as a God-fearing husband and father, highly esteemed and tender. He suffered a stroke last fall, when people feared that he was going to die. Already later hopes to restore a little revived. It was not accomplished. In all his suffering this was his comfort: The Lord is near the soul that signs to Him. He comforts the heart that weeps to Him crying.

He now rests from his labor and his works follow with him. Because of his faith he speaks even after he has died. Neighbors, friends and all relations are kindly thanked for all the signs of sympathy and the help granted during his illness, death and burial.

Obituary:
DeZeeuw, Mrs. John Driesje 1852-1936
Sioux Center News of Jan 9, 1936
Funeral Services were held Saturday afternoon, at the First Reformed Church for Mrs. John De Zeeuw 83 who passed away early New Years Morning. Services were in charge of Rev. L. A. Brunsting. Burial was in the Sioux Center cemetery.
Mrs. De Zeeuw had been ill for a number of weeks but had been able to be up and around for a few hours each day. Last Sunday she suffered a paralytic stroke from which she failed to rally.

Driesje Sneller was born Jan 28, 1852 in Elburg Gelderland Neth. At the age of 14 she arrived in America with her parents and lived in Alto WI for five years, in 1871 they moved to Alton, IA and there was untied in marriage to John De Zeeuw. They lived near Orange City and Newkirk for nine years. In 1885 they came to Sioux Center, and since 1893 lived on the same farm a few miles west of Sioux Center. Mrs. De Zeeuw was preceded in death by a child who died in infancy and her husband, who died in March of 1914.

The mother in the picture was Driesje Sneller, daughter of Rijk Sneller and Matje Juffer, Driesjes sister was Heintje (Mrs. Evert Vermeer), her brother was Eibert Sneller, another brother Dries Sneller. This indicated the ties to the many descendants of Mr. and Mrs.Rijk Sneller in the Sioux Center area.

The father in this picture was the son of Pleum de Zeeuw and Elizabeth De Haan. They moved to the USA from Barendrecht, Netherlands on April 11, 1879.

Subbmitters note:
There may be a glimse into the family life of Jan and Driesje in the coming BIOs of John A. DeZeeuw and Gerritdina Hubers story and that of Pleun J. De Zeeuw and Lillian Van Putten story

(There was also a child named Jan Arie who died at age two.)

The mother in this picture was Driesje Sneller, daughter of Rijk Sneller and Matje Juffer. Driesje's sister was Heintje (Mr. Evert Vermeer), her brother was Eibert Sneller, another sister, Wiggertje (Mrs. Dirk Bos), and another brother Dries Sneller. This indicates the ties to the many descendents in the Sioux Center area.

The father in this picture was a son of Pleun De Zeeuw and Elizabeth De Haan. They moved to the United States from Barendrecht, the Netherlands, on April 11, 1870. Children born to this marriage were: Rookje, Johanna, Apolonia, Magdalena, Arie (died at 9 years), Jan (died ? date), Hilletje, Pieter (died at 1 year), Arie (died as a child), Pieter (died at 4 years) and Arie Pleun. 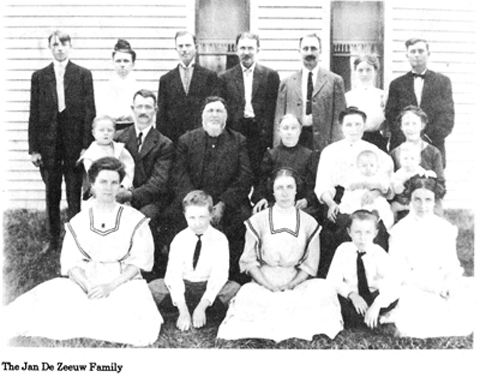