Joesph Van Deest was born in 1862 in Groningen, Holland. He came to America in 1883. He left behind a sister and a half-brother. He arrived in LeMars when he came to Iowa and stayed with a Van Zee family. He then moved to Orange City and lived there for several years before moving to Sioux Center, He was a carpenter by trade and built many houses, churches, schools and barns in the area. He supervised the building of the local grade school. He also assisted in the building of the First Reformed Church (the on destroyed by a tornado) and the parsonage.

He married Jane Juffer in 1893, she was born August 31, 1875 in Oldebroek, Netherlands. She came to America in 1881, they had two children. Ray was born 1896, and Margaret (Maggie) born 1897. Rey graduated in 1914 form Sioux Center High School and then attended Pharmacy School at the University of Iowa. He married Grace Bos April 1, 1920 and then went to work at Schalekamps Drug store. He worked there for years.

Maggie graduated from Sioux Center High School in 1915 and then taught rural school for 4 years, three North and on West of Sioux Center. She boarded at Case Wissink. She married Ernest Mulder Dec 4, 1919.

Joseph Van Deest was on the town Council from 1910 to 1916, the last four of those years he served as mayor. In 1924 he was again elected to the office and continued as such until his death. No one before held a position on the council that long. As mayor he tried to improve the town as economically as possible. While he was mayor in 1926 bids were let for paving Main Street. A petition for injunction by the Sioux County Board of Supervisors restraining in Sioux Center from securing funds from state or county for 50% of cost of paving main street. Mayor Van Deest was authorized to employ legal aid to counteract this action. He spent much time on this matter and the paving contract was approved on Nov.1 927.

These comments were taken from the paper at the time of his death: Through his years of experience he had a good understanding of what was needed in Sioux Center. He will be difficult to replace because of his ability to satisfy people. He was an honest, efficient and faithful public servant. His loyalty, intelligence and experience made his services of great value.
He passed away July 2, 1916. He had been ill and then developed pleurisy.

FAMILY OBITS
Sioux Center News July 31, 1941 (Jubilee Edition)
J.H. Van Deest came to America from Gronigen, Netherlands in 1883 at the age of 21 years, leaving his parents, sister and half brother in Holland. He arrived at LeMars and stayed with the Van Zee family, around Orange City for several years. He was a carpenter by trade and built many of the older homes, churches, schools and barns of this community; supervising over the building of the local public grade school building and First Reformed Church, and building the parsonage of the church. He was married to Jane Juffer in 1893 and to this union two children were born, Ray Van Deest and Maggie (Mrs. Ernest Mulder). He served the town as councilman, continuously from 1901 to 1916. He then served as Mayor for four years. In 1924, he was again elected Mayor, and continued as such until his death July 2nd, 1929. There are six grandchildren.

Sioux Center News June 28, 1956
Mrs. J.H. Van Deest, nee Jane Juffer, passed away early Thursday morning, after a short illness, at the age of 80 years, 9 months and 21 days. She was born in the Netherlands and came to America with her parents at the age of five years. They settled in Pella, Iowa, but moved to Sioux Center, Iowa after a few months, where she continued to live until the time of her passing.
Mrs. Van Deest was united in marriage to Joseph H. Van Deest on March 2, 1893. To this union two children were born, namely; Ray Van Deest and Maggie, Mrs. Ernest Mulder, both of Sioux Center. Besides the two children she is further survived by six grandchildren and twelve great grandchildren. She was the last of the Juffer family. Mr. Van Deest preceded her in death on July 2, 1929.
Mrs. Van Deest was a faithful member of the Central Reformed Church and the senior Ladies Aid. For the past eight months she made her home with her children, Mr. and Mrs. Ernest Mulder.
Funeral services were held Monday, June 25, at 1:00pm at the home of Mr. & Mrs. Ernest Mulder and at 1:30pm at the Central Reformed Church. Rev. M.E. Klaaren officiated. Burial was in the Sioux Center Community cemetery.

Funeral services were held at Central Reformed Church here at 1:30 P.M., Monday, June 24, for Ray Van Deest, 79, retired Sioux Center pharmacist and a lifelong resident of this community, who died June 20 at Grand Rapids, Mich., after an illness of several weeks duration.
Services were conducted by the Rev. Robert Hulzenga, associate pastor of Central Church, and burial was in Memory Gardens Cemetery here under the direction of Memorial Funeral Home of Sioux Center.
Mr. Van Deest was born February 13, 1895, in Sioux Center. He graduated from the University of Iowa and had been a pharmacist at Schalekamp's Drug in Sioux Center for 52 years.
He married Grace Bos April 1, 1920, here. She died March 12, 1959.
Survivors include a daughter, Mrs. James (Jeane) Irwin of Grand Rapids, Mich., and two grandchildren.
Source: Sioux Center News, June 27, 1974 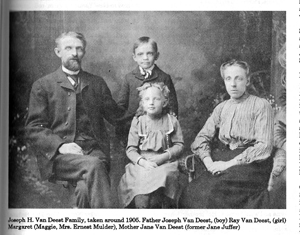