This story is one of two stories on Jan Rozeboom born 1840 that was published in the Sioux Center Centennial book 1991 page 498. Both stories were included in this BIOS section because they were written by different authors and contained some different information.

This story was submitted to the book by Bernice Sandbulte. It was transcribed for this BIOS by Beth De Leeuw.

Jan Rozeboom was the oldest son of Beert Rozeboom and Driesje Van Loo. He had four brothers and two sisters. Jan was born in Elburg, Netherlands. While very young, his parents moved to Oldebroek. It was here, at the age of three or four, that he had an accident with his thumb. His father had been using the Hackselbox, a homemade instrument used to cut hay and other fodder into small pieces by means of a long sharp knife which was attached at one end leaving the other end free to be manipulated as desired. Jan was always inquisitive and when he saw the hackselbox he decided to try it out. He slid the hay along through the box and pulled down the knife. It worked along beautifully until he got his left thumb too close to the knife and almost cut it off. His parents did not take him to a doctor but bandaged the hand themselves. When the bandage was removed the thumb had grown on backwards.

Jan continued his education in Oldebroek, and finished the 8th grade which is the equivalent to the 12th grade here. He loved to sing and while his friends went skating he practiced singing. He and several other boys had organized a singing club.

On March 13, 1863, at the age of twenty two and one half years he married Hermina Schipper. His occupation was that of a daily laborer. In the winter he worked on the summer dyke with a wheel barrow carrying dirt on the dike to keep back the water of the Zuider Zee. In the summer he cut grass with the scythe for the neighbors. Their first son, l. Beert was born and died at the age of 11 weeks, 2. another son was born and they again called his name Beert. Then 3. Hannes, who married Ella Vande Berg, 2nd marriage to Henrietta Wesselink. 4. Dries (Andrew) married Gertie Punt, 2nd marriage May Peters. 5. Aaltje, married Lou Hoksbergen. 6. Lammert who married Mary Remmerde. 7. A child who died at birth. 8. Cornelius (died at 9 months). 9. Lillian, married Barnie Kempers. 10. Lizzie, married to Gerrit Vande Berg. 11. Anna, married John Kempers. 12. Minnie, married Engbert Vander Hoop, his 2nd marriage Minnie Langel. 13. John D. married Cena Vander Ploeg. On April 14 of 1880 Hermina died after giving birth to John. That was a terrible blow to the family for she had been a loving, caring and praying woman. Prior to this, Andrew had gone to Jans brother-in-law Eibert Dykhuizen, and now John also went there in as much as it was impossible for Jan to take care of a child who was still a baby.

The problem of providing for his family continued and seeing no future in the Netherlands, he once more became interested in America. He consulted with his family and they agreed that moving to America might solve their problem. They had a sale on Aug. of 1881 and 6 days later, Jan with 8 children, the oldest being 15 years and the youngest 3½ yrs. old, were on the boat Pollux. Andrew and John remained in the Netherlands with the Dykhuizens. They arrived in Le Mars, IA. On Sept. 3, 1881, and went to Alton, IA. In the middle of the night to stay with Hendrik Jan Schut, who treated them royally. The entire family had stood the trip well and they were all healthy upon their arrival in the new land.

In March, 1882, Eibert Dykhuizen arrived from Holland, bringing Andrew and John with him and they lived with Jan on the farm. It was difficult to get a start. People took advantage of Jan. He paid 24% interest on a note for which he had purchased his first grass mower. Jan had paid all his debts in Holland except $200.00 (which was later paid back) and had $100.00 left to buy only the barest necessities.

On Aug. 20, 1884, Jan married Jannetje Hoksbergen and experienced 45 years of happy wedded life with her. Out of this marriage children were born: Maggie, married Charles Vande Berg; 2. Henry married Dena Kruizinga, 2nd marriage Harriet Noteboom; 3. Gerrit, married Jannetje Jen Rens; 4. Johanna, married Henry Vermeer; 5. Neal (Cornelius) married Wilhelmina Cleveringa; 6. Richard married Marie Brummel; 7. Jennie; 8. Minnie, married Glen Neiffert. It was during this time that Aaltje (Mrs. Lou Hoksbergen) and Minnie (of the first marriage, Mrs. E. Vander Hoop) passed away. On Feb. 15, 1930 Jan became ill and died on May 6, 1930 at the age of 90 years and 20 days. Every living son and daughter, 16 in all were in the room when he passed away. Jan was the father of 21 children and he always gave God the glory for all his blessings, ever declaring that he merited nothing.

Taken from the Rozeboom Centennial 1840-1940.
Submiited to the Sioux Center Centennial book by Bernice Sandbulte

RESEARCH NOTES  added by Wilma J. Vande Berg
Let it be noted the family name in the Netherlands was Roozeboom.

MARRIAGE RECORD of Jan Roozeboom a farmer age 22, to Hermina Schipper age 21 on 27 Feb 1863 at Oldebroek, Gelderland Netherlands. His parents were Beerd Roozeboom and Driesje van Loo and her parents were Johannes Schipper and Aaltje Vis.

OBITUARY of Jan Rozeboom 1840-1930
Hull Index of May 30, 1930
John Rozeboom - Funeral services in memory of John(Jan) Rozeboom, pioneer Sioux Center resident were held Friday afternoon. May 16th, at the home and First Reformed church, in charge of Rev. L. Brunsting. Many came to show their respect for the venerable man, who passed his 90th birthday last month, and is survived by a family of sixteen children.
He was born at Oldebroek, the Netherlands, on April 16th 1840. At the age of 23 he married Hermina Schipper. Ten children were born to the couple of whom eight are living: Bert and Johannes. Sioux Center; Andrew, Sebastapol, Calif.; Lammert, Sheldon; Mrs. Barney Kempers Sioux Center, Mrs G. J. Vande Berg, Orange City; Mrs. John Kempers, Sioux Center; John, Steen, Minnesota. Mrs. L,. Hoksbergen, the third child, and Mrs. E. VanderHoop, the ninth, have passed on.
Mrs. Rozeboom died in the year 188O and the following year Mr. Rozeboom and his family came to the United States, settling on a farm near Newkirk. Later they moved to the Sioux Center vicinity but for the past 20 years have lived in Sionx Center. In 1882 Mr. Rozeboom married Jannetje Hokshergen. Eight children were horn to them, namely: Mrs. Chas. Vande Berg, Crawford, Colorardo; Henry J., Mrs. H. W. Vermeer, Gerrit and Neal, Sioux Center; Reverend Richard Rozeboom of Denver. Colorado: Miss Jennie at home; Mrs. G. Nyfort, Ogden, Iowa. All sixteen children were present for the services.
Mr. Rozeboom was an elder in the First Reformed church for 20 years and long a teacher in the Sunday School, where his Influence for good was felt for many years. Family and friends will ever revere his memory.

OBITUARY of Jannetje Mrs. Jan Rozeboom 1861-1951
Sioux County Capital of March 22, 1951
AGED WOMAN DIES
Mrs J. Rozeboom, one of the Sioux Centers oldest residents, passed away at the home of herdaughter Mr and Mrs H. W. Vermeer on Friday morning March 16. She would have been 90 years old on the 5th of April. She had been down in bed for the past several weeks, and suffered a stroke on Wednesday afternoon.
Mrs. Rozeboom had the largest family in this vicinity, having 450 people in her family. She had 8 children, 10 step children, 150 grandchildren, 229 great grandchildren and 45 great great grandchildren. Born at Gelderland, Netherland, she came to America at the age of nine years with her parents Mr and Mrs Henry Hoksbergen. They settled at Pella living there for 14 years, and then came to Sioux County where she spent the remainder of her life.
On the 20th of August, 1884, she married John Rozeboom who at that time was a widower with ten children ranging in age from five to twenty years. Besides being a mother to these children, she also had eight of her own. The children are Maggie (Mrs Charlie Vander Berg) of Crawford, Colo., Henry of Lynden, Wash., Gerrit of Orange City, Johanna (Mrs H. W. Vermeer) of Sioux Center, Neal of Sioux Center, Rev. Richard of Knoxville,, Iowa, Jennie who died on April 16, 1947 and Minnie (Mrs Glenn Niefert) of Red Oak, Ia. The step children are Beert of Sioux Center, Mannes who died on Oct. 24, 1949, Allie, (Mrs Louis Hoksbergen) deceased Andrew of Sebastebol, CA, Lillian (Mrs Barney Kempers) of Sioux Center, Lizzie (Mrs. Gerrit Vander Berg) of Orange City, deceased, Annie (Mrs. John Kempers) of Sioux Center, Minnie (Mrs. E. Vander Hoop) deceased, and John of Steen, MN.
Mr. Rozeboom passed away in the year of 1930 at the age of 90 years. After his death she and her daughter Jennie lived together until the latters death and Mrs. Rozeboom then went to make her home with her daughter the H. E. Vermeer family. She was alert until the time of her earth. She enjoyed her family and friends visiting with her and attended the meetings of her Aid Society until just a few weeks before her passing. She kept a strict record of her family, jotting down each member in her little book.
Funeral services were held on Tuesday afternoon March 20 at the Vermeer home and at the First Reformed church where she had been a very active member for many years. Rev. P. A. De Jong officiated and burial took place in the family plot at the Sioux Center community cemetery.
------------------------
(From the Sioux County cemetery Index Jannetje Rozeboom born 5 Apr 1861, died 16 Mar 1951. Her husband Jan Rozeboom born 16 Apr 1840, died 6 May 1930. Both are buried in the Sioux Center cemetery.) 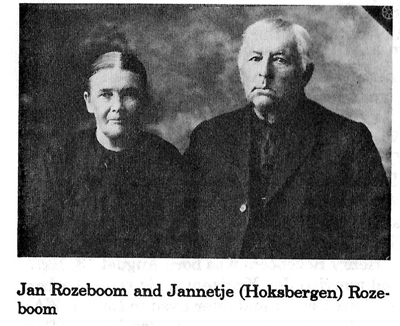