This story was taken from pages 166-168 of the Rock Valley St. Marys Catholic Church Book written for the centennial of the church in about 1982(?). The story was transcribed for this BIOS by Beth De Leeuw of the Greater Sioux County Genealogical Society. Some research notes were added.

PETER TUYNMAN was born December 4, 1873 at Tzandt, Province of North Holland. He came to the United States in 1884 with his parents, William and Anne Tuynman, and eight of his nine brothers and sisters. They lived for one year at Orange city, Iowa and then moved to a farm near Hurley, South Dakota. After three years they moved to a farm near Rock Valley where Peter went to work for a neighboring farmer.

HANNAH RIELLY was born on June 5, 1878 in Bellmullet, County Mayo, Ireland, the oldest of 11 children of Thomas and Catherine Rielly. In 1879 the family moved to New Richmond, Wisconsin and seven years later they came to the Rock Valley vicinity and bought a farm less than a mile from the Tuynmans. After completing her education, Hannah worked as a seamstress.

Pete and Hannah were married at St. Marys on September 5, 1905. They farmed for a number of years and then moved into Rock Valley where Pete became manager of the Farmers Lumber Co. In 1955 they celebrated their Golden Wedding in the parish hall of St. Marys. Pete died February 24, 1956 and Hannah on March 25, 1963 and both are buried in St. Marys Cemetery.

MARY TUYNMAN BRADY was born November 3, 1906 at Rock Valley. She graduated from St. Marys May 27, 1923, one of three in the last high school class to graduate from there. She then spent two years at Iowa State Teachers College (now the University of Northern Iowa), graduating in December, 1925. She started teaching in the Rock Valley Elementary School in January, 1926 and taught there for 5½ years. In 1931 she went to Mitchell, South Dakota where she taught for 11 years.

In 1943 she married Harold E. Brady of Mitchell, South Dakota, who was then in the U.S. Navy, stationed in Brooklyn, N.Y. The Bradys lived in Brooklyn until the end of WWII. They then moved to Pontiac, Michigan where they lived for 14 years.

In 1959 they moved to Aberdeen, South Dakota where they remained for eight years. Harold was in Hospital Administration and Mary returned to school and got a B.S. Degree at Northern State College, after which she taught in parochial and public schools.

In 1967 the Bradys moved to Alhambra, California, which has been their home ever since. They are both retired but are very active in volunteer work, notably with Right to Life League of So. California.

The Bradys have one son, James, born in 1946 in Pontiac, Michigan. He graduated from S.D. School of Mines and is employed as an Electrical Engineer with Hughes Engineering Co. of Canoga Park, California. He and his wife, Maureen, live in Simi Valley, California.

IRENE TUYNMAN LUCAS was born in Rock Valley on November 16, 1907 and attended St. Marys Academy through 10th grade, when it closed, and graduated from Rock Valley High School in 1925. After graduating from Iowa State Teachers College she taught in rural schools in Sioux County for three years and in 1929 left Rock Valley and started teaching in Mitchell, South Dakota.

Rosemary Bruggeman, Sioux Falls, South Dakota is an office manager for John Hancock Insurance. She is a widow and has four children, Coleen, Patrick, Catie and Kelly.

Kathleen Anstey, Omaha, Nebraska, is a housewife, married to Dr. John Anstey, Prof. at the University of Nebraska. They have three children, Mary Therese, Erin and Christine.

Tom Lucas, Seattle, Washington, is a tax lawyer and single.

Janet Pinaire, Omaha, Nebraska, is a school principal and is married to Bill Pinaire, a pharmacist and drug store owner. They have one son, Brian.

MARGARET TUYNMAN (see Vander Meer in the St. Marys book for full family account.)
Briefly, Margaret was on in Rock Valley Dec 6m, 1909 a Triplet, on August 1 1934 she married Pete Vander Meer a baker and later moved to LeMars and started the Vander Meer bakery there. They had eight children, Peter, Mary, Bill, Evelyn Tom ,Jim Anne and Dorothy.

MARCELLA TUYNMAN WALHOF was born at Rock Valley on December 6, 1909, and attended St. Marys School through the eighth grade. She graduated from Rock Valley High School in 1928 and attended Iowa State Teachers College, after which she taught in rural schools in Sioux County for eight years.

She married John Bernard Walhof of Rock Valley on July 15, 1936 and they moved to Twin Falls, Idaho. Bernard died in April, 1978 in Boise, Idaho where Marcella still resides.

Helen Ann Rutherford, San Diego, California, is married to an American Airlines pilot and they have three sons.

Nancy Utpadel, Anchorage, Alaska, is a teacher and her husband, Jon, is principal of Jr. High on Elmendorph Air Base. They are the parents of two daughters.

John Bernard Walhof, Jr., Ontario, Oregon, is Personnel Manager of Ore-Ida. He and his wife, Lynn, have no children.

DOROTHY TUYNMAN ZIMMER was born at Rock Valley November 30, 1914. She completed the eighth grade at St. Marys School and graduated from Rock Valley High School in 1932. She then moved to Pontiac, Michigan where she worked at St. Josephs Mercy Hospital.

In 1939 she married Manley Walter of Clarkston, Michigan. They lived in Clarkston until WWII, at which time they moved to Berea, Ohio and then Detroit, Michigan, where Manley worked for General Motors in conjunction with the Armed Forces. After the war they returned to Clarkston and Manley resumed his position as Cost Analyst for General Motors. Manley died in 1954 and is buried at Clarkston.

The Walters had three children, Susan, James and Louis.

Susan Eufers, Le Mars, Iowa, is employed at Vander-Meer Bakery and her husband, Charles, works for the City of LeMars. They have one daughter.

James Walter, Omaha, Nebraska, is employed in hospital work, is married and has three children.

Louis Walter, Rochester, Minnesota, works for the Credit Union of St. Marys Hospital, is married and has three children.

DOROTHY moved to LeMars, Iowa in 1955 and in August, 1956 she married William Zimmer at St. Marys Church in Rock Valley. Bill died in April 1980 and is buried in LeMars, Iowa. Dorothy continued to live in LeMars until her death on May 19, 1982. She is also buried in Calvary Cemetery, LeMars.

PETER EDWARD TUYNMAN, JR. was born April 10, 1919 at Rock Valley. He attended St. Marys School and graduated from Rock Valley High School in 1938. He took premedical and medical training at Creighton University, Omaha, Nebraska, graduating in 1944. He interned at Ellis Island while in the Army and took his residency at Mt. Carmel Mercy Hospital, Detroit, Michigan.

In 1944 he married Marie Reilly and they had four children, Anne, Tom, Bill and Peter. Ed was killed in a car accident on April 21, 1960 and is buried in Detroit.

OBITUARY OF PETER TUYNMAN
Source: Sioux Center News (3-1-1956)
Peter E. Tuynman, 82, died Friday morning, February 24 at his home in Rock Valley. He had been ill health for several months. He was a resident of Rock Valley and the farming community for seventy years.
Peter Tuynman was born in Holland, December 4, 1873, son of William and Anna Tuynman and came to America at the age of 11 with his parents and settled on a farm near Rock Valley. He married Hannah Rielly, September 5, 1905 and located on a farm northwest of Rock Valley.
They farmed for several years in Sioux County and later moved to town where he was employed at the Farmers Lumber Company for 36 years and retired seven years ago. Mr. and Mrs. Tuynman were parents of triplets who survive him.
He is survived by the widow, Hannah, seven daughters, Mary , Mrs. Harold Brady, Ponitac (Michigan), Irene (Mrs. George Lucas, Sioux Falls), Marcella (Mrs.Bernard Walhof, Boise, Idaho), Madeline, (Mrs. Arther Klein, Rock Valley), Margaret (Mrs. Peter Vander Meer, Le Mars), Dorothy (Mrs. Manley Walter, Le Mars), Eileen (Mrs. Martin Mc Namara, Rock Valley),and a son, Dr. P. Edward Tuynman, Detroit, Michigan; four sisters, Mrs. Nellie Nazlett, Sioux Falls; Mrs. Kate Hurdelrink, Fairmont, North Dakota; Mrs. Anna Henson, Hawarden; Mrs. Margaret Coyer, Inwood; two brothers, Reynold, Madison, South Dakota, and Henry, Eugene Oregon; and 30 Grandchildren.
He was preceded in death by his parents and two brothers, William and John.
Mr. and Mrs. Tuynman celebrated their Golden Wedding Anniversary this past summer, with all of their children present and also all of their grandchildren in attendance.
Funeral services were held at 11 A. M. Monday, February 27 at Saint Marys Church, with the Rev. Father David McCoey officiating. Burial was in Saint Marys Cemetery in Rock Valley.

OBITUARY OF HANNAH TUYNMAN
Source: Hawarden Independent April 4, 1963
Mrs. Anna Benson, Mrs. William Harker and Mr and Mrs. Raymond Benson attended the requiem funeral mass for the former's sister-in-law. Mrs. Hannah Tuynman, 84, at St. Mary's Catholic Church in Rock Valley at 10 o'clock Thursday of last week.
Mrs. Tuynman, who died in the Sacred Heart Hospital in Le Mars Monday, came to the United States from Ireland as an infant.
She was preceded in death by her husband in 1956, a son, Dr. Peter Tuynman of Detroit Michigan, who was killed in a car accident three years ago, a brother and four sisters, three of who were nuns.
Survivors include seven daughters, Mrs. Harold Brady of Aberdeen S.D., Mrs Geroge Lucas of Sioux Falls, Mrs Arthur Klein and Mrs. Martin McNamara, both of Rock Valley, Mrs. Pete Vander Meer and Mrs. Will Zimmer, both of Le Mars, and Mrs. Marcella Walhof of Boise, Idaho; a brother who is a priest, and three brothers residing in Rock Valley; John, William, and Pat Reilly; a sister who is a nun; 32 grandchildren, and 11 great-grandcildren. 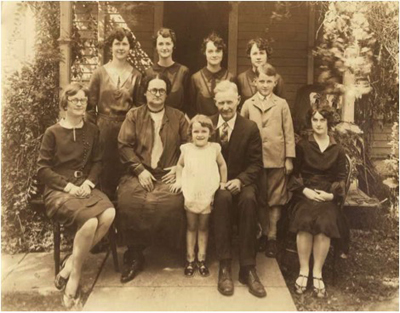