This story was taken from pages 153-154 of the Rock Valley St. Marys Catholic Church Book written for the centennial of the church in about 1982(?). The story was transcribed for this BIOS by Beth De Leeuw of the Greater Sioux County Genealogical Society. Some research notes were added.

ALBERT was the oldest child of Henry and Catherine Kramer Schemmer born in Loretta, Tennessee in July of 1876. The family came to Rock Valley in 1881 and lived at 1616 Main Street. ( See their separate BIOS Story).

As a young boy, he was the town cow herder. He got each familys cow from their barn and took it to the town pasture which was from 18th Street north to 20th Street and from 17th to 18th Avenue. At supper time, he returned the cows to their respective barns.

Albert was also the first lamplighter in Rock Valley. When these early street lights were installed, he would ride in a horse drawn wagon, standing to reach the lamp with his torch. It was also his job to keep the chimneys clean.

In 1900 he married KATIE RICHTER in St. Marys Church. They lived for a while above the bicycle shop while their house just east of the First Reformed Church was built. (She was the daughter of William and Mary Richter.

Albert was a cooper (barrel maker) by trade but also had a bicycle shop. He expanded over the years buying the hardware business and incorporating Baumans tin shop. He built the building where the Music Shop is and had the hardware store there for many years. His oldest son had the store after he died.

He also built the building where the Coast to Coast now is. It housed a garage and restaurant.

He and his family later moved to 1701 17th Street where most of the family grew up.

Norbert and Oliver died in infancy and Arthur died in a traffic accident at the age of two. They are buried in St. Marys Cemetery.

1. CLARENCE went on after high school to Creighton in Omaha, NE. after graduation, he went into the hardware store with his father. He married Betty Barrows, born March 29, 1902 at Lamoni, Iowa. She attended Graceland College for two years, ISU for one and ¾ years, and night school at LeMars. Betty taught school in Winterset, Mr. Ayre, Rock Valley, Sheldon, Rock Rapids and Doon before retiring.
In the early forties, he went to work in Alaska. When he returned to Rock Valley, he opened the Schemmer Heating and Plumbing on 14th Avenue.
An industrial accident took his life in Omaha in October 1961. He was buried in St. Marys Cemetery.
His wife, Betty, continues to live in Rock Valley. Clarence and Betty had three sons, Jim, Mike and William.
James Albert, who attended Marquette University in Milwaukee, and received a civil engineer degree, now lives in Bellevue, Washington, is married and has six children, three boys and three girls.
Jon Michael who also attended Marquette University and received a degree in civil engineering, now lives in Chilton, WI, is married, and has four children, three girls and one boy.
William Joseph was in the Navy and attended night school in Tampa, Florida. There he learned the trade of electronics. He is married, resides in Tampa, Florida, and has four children, three girls and one boy.

3. WALTER married Inez Maske and lives in Logan, Iowa and Sun City, Arizona. They have one son, Carman.

5. LUNETTA after graduation from Rock Valley, went to St. Josephs School of Nursing. She worked in St. Josephs Hospital in Pontiac, Michigan and in Hull, Iowa. She married Clarence Goldsmith, a lumberman. They lived in Grand Meadow and Mahnomen, Minnesota. Lunetta died in November of 1980. During their marriage, they were blessed with two children, Karen and Mark.
Karen, who married Peter Etzell, has eight children.
Mark, who married Penny Ommen, has three children.

7. EVELYN (see Martin Cullinan in St. Marys Church book) She was born to Albert and Kate Richter Schemmer on April 26, 1913.

9. CATHERINE married Floyd Olson in 1946. They reside at Cannon Falls, MN. Kay went to business school and worked in the Valley State Bank in Rock Valley. She moved to Grand Meadow and worked in a bank there, then in Shreveport, LA.
Floyd served in the U.S. Army in Europe from 1942-1945. They had eight children and fifteen grandchildren.

10. MARGARET went to business school in Sioux City, Iowa and then worked for Hormels in Austin, MN. She married Harold Otterstrom of Austin, MN in 1939. Harold served in the U.S. Army in Europe from 1942-1945. They now reside in Tulsa, Oklahoma. They have eight children and fourteen grandchildren.

12. AGNES finished high school in Rock Valley and then went to Creighton School of Nursing in Omaha. She married Dr. Thomas McIntosh on March 2, 1943. They moved to Pasadena, CA where Dr. Tom interned at Huntington Hospital. He took his residency at Huntington Hospital. He took his residency in anesthesia at U.S.C. Medical Center. He has practiced in the Pasadena area for the past 39 years. Six children were born to this union, three girls and three boys, most of whom live and work in their native California. They are fourth generation Californians. Agnes and Dr. Tom have one grandson.

OBITUARY OF ALBERT SCHEMMER
Born: July 9, 1876
Died: July 16, 1937
From the Sioux County Capital, July 22, 1937:
Albert Schemmer passed away at his home in Rock Valley on Friday morning, July 16 following a lingering illness of creeping paralysis, which began some four years ago.
Mr. Schemmer was a hardware merchant for many years. He was proprietor of the Schemmer Hardware Store until he became ill. His son Clarence then became proprietor.
Mr. Schemmer is survived by his wife and children, who are: Mrs. Clarence Keegan, Evelyn Catherine, Agnes of Rock Valley, Margaret of Sioux City and Mrs. Clarence Goldsmith of Grand Meadow, Minn. and two sons, Clarence of Rock Valley and Walter of Mason City.
Funeral services were held at St. Mary's Catholic Church Monday morning July 19. Rev. Father A. J. Foerster was in charge of the service. Business places were closed in Rock Valley during the services in honor of a good business man and friend. Burial was made in the Catholic Cemetery.
* * * * * * * * * *
From the Sioux Center News, July 22, 1937:
PROMINENT ROCK VALLEY HARDWARE DEALER DIES
A. F. Schimmer[sic], well known hardware dealer in Rock Valley for years, passed away in his home there last Thursday morning. The funeral was held Monday morning at 9 oclock from St. Marys church. Mr. Schimmer leaves to mourn his passing his wife, two sons, and seven daughters. He was 61 years old.
Mr. Schimmer has been ill for the past four years, confined to bed most of this time with paralysis. He is especially remembered as a sportsman; hunting and fishing and trap shooting were his favorite pastimes. His son Clarence is in charge of the hardware store.
* * * * * * * * * *
Other coverage adds this information:
A brief note on his death in the Hawarden Independent, July 29, says that he was born in Tennessee in 1876, but had lived at Rock Valley since he was 5 years old. He is survived by his wife and nine children.
An obituary in the Ireton Ledger, July 22, lists his surviving children as Clarence of Rock Valley, Mrs. C. Keegen of Inwood, Walter of Canton, S.D. Mrs. C. Goldsmith of Grand Meadow, Minn., Evelyn, Viola, Katherine, Margaret and Agnes at home.
The Alton Democrat, July 23, Rock Valley news, also calls him A. F. Schemmer, and adds that he was entirely helpless for over two years, and that a son was killed by an automobile in early childhood.
The Rock Valley Bee is missing for this time period.
* * * * * * * * * *
RESEARCH NOTES
The Sioux County Cemetery Index has Schemmer, Albert F., b. 1876, d. 1937, father, St Marys Cem, Rock Valley IA.
His death certificate has him as Albert Frederick Schemmer; born in Loretta, Tennessee July 19, 1876; resident of Rock Valley 56 years; a hardware dealer, last worked at this occupation January 1935; parents Henry John Schemmer, born in Burlington, Wis., and Katherine Kramer, born in Michigan; wife Katie Richter; died at 3:30 a.m. July 16, 1937; cause, lobar pneumonia right lower lobe, onset July 7, 1937; no contributory cause or condition is given.
His FindaGrave.com page includes a photo of his headstone, Albert F. Schemmer 1876-1937; parents Henry (1854-1932) and Kathrin (1855-1914) Schemmer; spouse Katie Richter Schemmer (1880-1972); three siblings and three children listed. An added note (no source given) says that he was born in Loretto, TN to Henry and Kathrin (Kramer) Schemmer, the oldest of 7 children. In 1900 he married Katie Richter at St. Marys Church. The couple had 12 children: Clarence, Elvira, Walter, Norbert, Lunetta, Oliver, Evelyn, Viola, Catherine, Margaret, Arthur and Agnes.

This picture was in the St. Marys Church book. 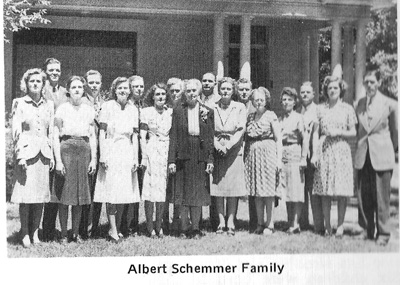