This story was taken from the Rock Valley Records & Recollections book written about 1976 in honor of the two hundredth birthday of our nation. It was a revision of the history written by Lottie Thomas in 1955. It was transcribed for this BIOS by Beth De Leeuw of the Greater Sioux County Genealogical Society and some research notes were added. Submitted to BIOS page by Wilma J. Vande Berg.

Mr. and Mrs. Michael Norris and their family of six children arrived in Rock Valley, Iowa, in April of 1881. They had been living on a farm near Cobb, Wisconsin for fifteen years. In 1881, Mr. Norris came west into Iowa to look for a more suitable location in which to live. He came to Sioux County and was so impressed with the farm land that he bought land near Rock Valley and moved his family to make their home here.

Mr. Norris had always been a farmer and a cattle feeder in Wisconsin so he purchased a feed lot on the north side of Rock Valley near the Rock River, where the Rock Valley Cement Block and Tile Company is now located. For several years, Mr. Norris fed cattle and shipped the finished stock to the Chicago markets.

Mr. Norris built his home in the east part of Rock Valley. It is located at 2002 14th Street and it is now owned and occupied by the John Graves. At the time that this house was built, it was last house on the south side of the street, which was then known as Kimball Avenue. The creamery was the only building east of this house.

The Norris family consisted of eight children. Six of the children were born in Wisconsin and two were born in Rock Valley. Deceased members of the family are Anna (Mrs. F.L. Dixon), Dr. Frank A. Norris, Dr. Luke L. Norris, Paul T. Norris, and Gerald B. Norris. Mary Norris and Lona (Mrs. Frank T. McGill) reside in Rock Valley, and Reginald Norris resides in Jacksonville, Illinois. All of the children of Mr. and Mrs. Norris attended and graduated from the Rock Valley Public Schools. Four of the Norris boys enlisted in the armed forces in World War I, and one enlisted in World War II.

(Revision of history written by Lona Norris McGill in 1955)

OBITUARY OF MICHAEL NORRIS
From the Rock Valley Bee, July 18, 1924:
Passing of Michael Norris
Michael Norris, an esteemed and substantial resident of Rock Valley, died at his home July 10th, after an illness of short duration, due to paralysis.
The deceased was born in Waterford, Ireland, May 10th, 1845, and at the time of his demise had attained the age of seventy-nine years and two months. When a child two years old he came with his parents to America and located at Highland, Wis., where his father engaged in agricultural pursuits and where the lad grew to manhood.
He formed the acquaintance of Miss Julia A. Pollard, of Clyde, Wis., and which culminated in their marriage Nov. 21st, 1876, when they immediately moved to Cobb, Wis., where they lived until April, 1891, when they came to Rock Valley, where they have resided continuously until his death. He was the youngest of a family of five children, all of whom have preceded him to the spirit world. He was the father of an interesting family of three daughters and five sons, namely: Mrs. Frank Dixon, postmistress of Rock Valley, and Misses Mary and Lona Norris, of Rock Valley; Dr. Frank A. Norris, Jacksonville, Ill.; Dr. L. L. Norris, Pomeroy, Iowa; Gerald Norris, a practicing attorney of Sioux City, and Paul Norris, also of Sioux City, a reputable business man, and Reginald Norris, of Rock Valley. Four of these sons served in the World War.
Mr. Norris acquired a competency which consisted largely in land interests in this community, and in his business and social life had acquired many friends by his uprightness of character. He was kind and considerate to others, and his presence will be missed by his family and a host of friends in the community.
Funeral services were held at St. Mary's church, of which he was an ardent member, Saturday morning at 9:30, conducted by the pastor, Rev. Father John A. O'Rielly. His remains were taken to Highland, Wis. Saturday, and interment occurred the following day. The family have the sympathy of their many friends in their hour of sorrow.
(Followed by resolutions of sympathy from the Catholic Daughters of Court St. Anne No. 215, of which his wife and daughters were members.)
* * * * * * * * * *
A shorter obituary in the Alton Democrat (July 19, Rock Valley news) gives some of the same information. It adds that one of his siblings died at age 21, the second in the Civil War, and the other two in recent years.
* * * * * * * * * *
His death certificate shows him born May 10, 1845, in Ireland; father Frank Norris, mother Kathrine Grace; occupation, retired farmer; died July 10, 1924 at 8:45 p.m. in Rock Valley, cause apoplexy, contributory cause arteriosclerosis.

OBITUARY OF JULIA NORRIS
From the Alton Democrat, May 21, 1937, Rock Valley news:
Mrs. Julia Norris, a pioneer resident of Rock Valley, passed away at her home in Rock Valley on Monday afternoon at five oclock.
Julia Pollard was born at Clyde, Wisconsin, October 23, 1857, where she grew to womanhood and married Mr. Michael Norris. The couple continued to live at Clyde for a time before coming to this vicinity where they made their home until death parted them.
To this union were born eight children, five sons and three daughters, all of whom survive. Mrs. Norris was the first president of the American Legion Auxiliary and charter member of the Literary Society and charter member of the Catholic Daughters of America. She was an ardent member of the St. Marys Catholic church.
She is survived by the following children: Dr. Frank Norris of Jacksonville, Ill., Dr. Luke Norris of Marens, Iowa, Mrs. F. L. Dixon of Rock Valley, Mrs. I. E. McGill, Miss Mary Norris of Rock Valley, Paul of Chicago, Ill., Gerald of St. Louis, Mo., and Reginald of Jacksonville, Ill. She also leaves three sisters, Mrs. Pat Shelton, Clyde, Wis., Mrs. Kate Griffen of Dodgeville, Wis., Mrs. Tom Moore, Lone Rock, Wis., two brothers Richard Pollard, Dodgeville, Wis., and Tom Pollard of Spring Green, Wis. There are also several grandchildren.
Funeral services were held Wednesday morning at the St. Marys Catholic church and the body was taken to Highland, Wis., to be interred beside her life partner, Michael Norris, who preceded her to that far bourne several years ago.
Dr. Frank Norris accompanied the body on the train and the following, Dr. and Mrs. F. L. Dixon, Mr. and Mrs. F. E. McGill, Miss Mary Norris, and Mr. and Mrs. E. R. Scanlan went by automobile.
* * * * * * * * * *
The Rock Valley Bee is missing for this time period.
Her death certificate gives her full name as Mrs. Julia Ann Pollard Norris; birth date as Oct. 23, 1858; parents Thomas Pollard, born in Wisconsin, and Ann Clinton, birth place unknown to the informant (L. L. Norris); died at 5:00 p.m. May 3, 1937; cause, influenza with hypostatic[?] pneumonia; contributory causes, chronic bronchial asthma and age.
Her FindaGrave.com page includes a photo of her headstone, which is degraded but seems to show a birth year of 1857. It shows her buried in Saint Philip Cemetery, Highland, Wisconsin and gives her parents as Thomas Pollard (1832-1891) and Ann Bennett Pollard (1840-1924). 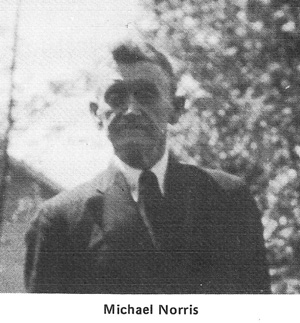