This story was taken from the Rock Valley Records & Recollections book written about 1976 in honor of the two hundredth birthday of our nation. It was a revision of the history written by Lottie Thomas in 1955. It was transcribed for this BIOS by Beth De Leeuw of the Greater Sioux County Genealogical Society and some research notes were added.

They were tenant farmers in three rural locations before buying their 120-acre farm northeast of Rock Valley. At the present time, the Ben Eppingas live on this farm.

They were the parents of seven children: Peter, John, Anna, Teresa, William, Agnes and Marie. Marie married William Richter, and they had two children, Francis and Mary Ann. Mr. Richter passed away in 1958. Marie owns and lives in the Klein home. She operates the lunch room at the Rock Valley Sales Pavilion.

OBITUARY OF JONAS KLEIN
From the Rock Valley Bee, December 21, 1923:
DEATH OF JONAS KLEIN
Jonas Klein, one of the pioneer settlers of this vicinity, departed this life at his home in Rock Valley on Thursday, December 13, 1923, at the age of sixty-seven years and twelve days, following a nervous illness of many years. He was confined to his bed since August 26, following a severe attack of pleurisy.
Mr. Klein was born at Idesheim, Germany, November 30, 1856, and came to this country at the age of sixteen years, in the spring of 1872, with an older brother. His parents did not come until several years later. He worked in Chicago until 1882 when he came to LeMars where he was united in marriage to Magdalene Oe on April 3, 1883. After two years, they moved to Rock Valley, where he had since resided and endured the hardships incident to pioneer days.
Mr. Klein was engaged in farming in this vicinity until September, 1918, when his health became so poor that it made it necessary for him to retire, and he then took up his residence in Rock Valley, where he continued to reside until the time of his death.
Mr. Klein was possessed of many [a line or two are missing] Roman Catholic Church, and character. The many men who called him friend will remember his kindness of heart and his neighborly spirit. He was a faithful member of the Roman Catholic Church, and a charter member of the Catholic Order of Foresters.
He is survived by his wife, seven children, one grandchild, two sisters and four brothers, as follows: Peter, John and Marie, of Rock Valley, Mrs. Victor Thill, of Timber Lake, S. Dak., Mrs. Frank Peklink, of Wayne, Nebraska, William, who is employed by the Anglo Prussian Oil Co. in Prussia; Agnes, who is in training at St. Joseph's Mercy Hospital at Sioux City, and a grandchild, Mary Magdalene Peklenk, of Wayne, Nebraska.
Those from out of town who attended the funeral were: Mrs. Margaret Majeres, Dell Rapids, S. Dak.; Mrs. Eva Foulz[?], Aurora, Illinois; one brother, Math. Klein, Winfield, Illinois; Mrs. Eulberg, Mrs. Wm. Burkhardt, Mrs. John Majers, of Dell Rapids, S. Dak.; Mrs. Schneff, Vincent and Ralph Schneff, of Remsen, Iowa; John Oe, of Woonsocket, S. Dak.; Anton Gaspard, of Roswell, S. Dak.; Mrs. A. J. Hopkins, Sioux Falls, S. Dak.
Funeral services took place from St. Mary's Catholic Church on Saturday morning and the remains were laid to rest in St. Mary's Cemetery.
* * * * * * * * * *
A briefer obituary with much the same information was published in the Alton Democrat, December 22, 1923, Rock Valley news.
The Plymouth County marriage register shows Jonas Kline of Remsen, Iowa, a farmer, age 26, born in Prussia, son of Nic Klein and [no forename] Sohn, marrying Magdalena Oe of LeMars, Iowa, age 20, born in Luxemburg, daughter of Pete Oe and [no forename] Weinesberg; marriage date April 3, 1883.
His death certificate on Ancestry.com shows Jonas Klein, born Nov. 30, 1855 in Germany; wife Lena Klein; occupation retired farmer; father Nicholas Klein, mother unknown; died Dec. 13, 1923, cause arteriosclerosis, contributory chronic nephritis; buried St. Mary's Cemetery, Rock Valley.
The Sioux County Cemetery Index gives his birth year as 1856.

OBITUARY OF MAGDALENA KLEIN
Source: Rock Valley Bee (1-21-1944)
Born: September 9, 1862
Died: January 16, 1944
MR. JONAS KLEIN--EARLY SETTLER AT VALLEY--CAME TO UNITED STATES AT THE AGE OF 12 YEARS
Friends and neighbors of Mrs. Jonas Klein were grieved and shocked when they learned of her death on Sunday morning January 16, after a short illness of only one week. She had the happiness of having all of her children at her side before her death.
Magdalene Oe was born in Weiler La Tour, Luxemburg, Europe on September 9, 1862. Her mother died when she was but a girl of 12 and she came to this country with her father and brother at the age of 18. . They resided on a farm near Granville, Iowa, and in April, 1882, she was united in marriage with Jonas Klein, who preceded her in death 20 years ago.
After two years they moved to Rock Valley, farming in this vicinity until 1918 when they bought the house in town which was their home until death.
Grandma Klein, as she was lovingly called by all who knew her, was one of the pioneer mother whose untiring labor and unselfish neighborliness helped build up the Catholic area and the surrounding country in which she lived. She was loyal and devout Catholic and a charter member of the Altar Society of St. Marys. Her kindly smile, her cheerful and happy disposition were known and will be greatly missed by her many friend.
She is survived by seven children as follows: Peter and Mrs. W.B. Richter of Rock Valley; John H. Klein of Alvord; Mrs. Victor Thill of Gleneross, South Dakota; Mrs. Frank J. Pecklenk of Los Angeles, California; Mrs. H.C. Boeker at Oklahoma City, Oklahoma ; William of Redland, California.
One brother, Joe Oe of Woonsocket, South Dakota and ten grandchildren also survive her.
Funeral service in charge of Father David McGoey were held at St. Marys Church in Rock Valley on Tuesday morning, January 18 and the remains were laid to rest at St. Marys Cemetery.

This picture appeared along with the family Story in the Rock Valley Records and Reflections Book. 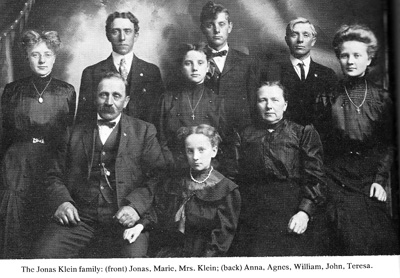