This story was taken from the Rock Valley Records & Recollections book written about 1976 in honor of the two hundredth birthday of our nation. It was a revision of the history written by Lottie Thomas in 1955. It was transcribed for this BIOS by Beth De Leeuw of the Greater Sioux County Genealogical Society and some research notes were added by Wilma J. Vande Berg also of the same society. .

Among the early settlers in this community were Mr. and Mrs. William F. Richter, who came here as newlyweds in 1879. They were accompanied by Mrs. Richters father, mother, and brother and first lived in a log cabin two miles west and one mile north of Rock Valley where their eldest children were born. After three years, they purchased the farm one-half mile west of their first home which was their home until they moved to Rock Valley in 1918. John Draayer now lives on this farm.

They were one of the thirteen families which formed the nucleus of St. Marys Catholic Parish in 1881. Prior to that time, they had attended church in LeMars, making the trip about once a month in a lumber wagon, going on Saturday afternoon and returning on Sunday.

The year 1879 was the last one that the grasshoppers came in hordes and took all the crops. After the crops were destroyed that year, Mr. Richter, having a team, went to work for the Milwaukee Railroad helping to grade the roadbed for the railroad which was put through that year.

In 1881 these pioneers saw the highest flood that the Rock River has ever hadit being two miles wide and extending from Main Street in Rock Valley to two miles west. It had snowed early that year on October 17, after which the weather turned bitterly cold and the accumulation of snow never left until on April 15 when a warm rain fell, melting all the winters snow and causing the great flood.

These hearty pioneers also worried through the blizzard of 1888 when their eldest daughter (Mrs. A.F. Schemmer, deceased 1972) was marooned in the schoolhouse three miles west and one north of Rock Valley with the teacher of that school. Mrs. W.C. Leonard, and her brother, Will Renshaw, who taught at the school just north. They had no lights and no means of communication with the outside world. Mrs. Schemmer slept on a school bench that night. The following morning Mr. C.W. Renshaw, father of the two teachers, stopped for his neighbor, Mr. Richter, and together they started walking to the school house for their children. Upon reaching the top of a hill, they could see smoke coming from the schoolhouse chimney and realized all was safe.

RESEARCH NOTES  added by Wilma J. Vande Berg
From a family report on ancestry.com (done by others)

OBITUARY OF WILLIAM RICHTER
Wm. F. Richter, Rock Valley, one of Sioux county's oldest pioneers, died at the home of his son William Richter, jr. at the age of 83 years. Mr. Richter passed away Saturday evening.
Mr. Richter was born at Burlington, Wis. on Feb. 28, 1853. He was married to Miss Mary Richter on Feb. 18, 1879. Mr. and Mrs. Richter have lived in Sioux county since their marriage. They lived on a farm for many years. In 1918 they retired and moved to Rock Valley where Mr. Richter has lived since that time. Mrs. Richter preceded him in death in November 1926.
Mr. Richter is survived by five children who are Mrs. A. F. Schemmer and William J. of Rock Valley, Mrs. D. A. Crowley of Canby, Minn., Mrs. F. N. Haas of Omaha, Nebr. and Ed Richter of Madison, S.D. Four sons preceded him in death whose names were John, Herbert, Henry and Clarence. He is also survived by one brother, Theodore Richter, and a sister, Mrs. William Luke of Burlington, Wis.
Funeral services for Mr. Richter were held at St. Mary's Catholic church Tuesday morning. Rev. Father Forester was in charge.
Source: Sioux County Capital, Nov. 12, 1936.
* * * * * * * * * *
Early Settler Passes
Wm. F. Richter passed away Saturday night at 11:20 from infirmities of old age. Mr. Richter has been in failing health for some time but for the past two weeks has been seriously ill. The end came October 31, 1936 very quietly. Mr. Richter was a man well thought of by all who knew him. Mr. Richter came to this vicinity in the spring of 1879 with his young bride and set up housekeeping on a farm northwest of where Rock Valley now stands. He was married at Burlington, Wis., February 18, 1879 and to this union were born nine children, four of whom died in infancy. The remaining five are Mrs. Schemmer and Wm. B. Richter of Rock Valley, Mrs. Laura Haas of Omaha, Nebr., Mrs. Clara Crowley of Canby, Minn., and Edward Richter of Madison, S.D. Mrs. Richter preceded her husband in death November 28, 1926, almost ten years previous during which time he has employed housekeepers and toward the last has lived with his son, Wm. B. Richter and wife. Funeral services were held Tuesday morning with burial in St. Mary's Cemetery.
Source: Alton Democrat, November 6, 1936: Rock Valley.

OBITUARY OF MARY RICHTER
DEATH OF MRS. WM. RICHTER
Mrs. Wm. Richter passed away at her home in Rock Valley at ten o'clock Sunday evening [November 28] following a week's illness.
Mrs. Richter was born in Westphalia, Germany, March 9, 1859, and was sixty-seven years, eight months and nineteen days old at the time of her death.
She came with her parents to this country when she was nine years of age. The family located at Burlington, Wis., where she grew to womanhood. She was united in marriage with Wm. F. Richter at Burlington, February 18, 1879. A few weeks later they moved to Rock Valley and lived on a farm northwest of here, until about eight years ago, when they moved to Rock Valley.
Mrs. Richter was a woman who was very highly respected and loved by all who knew her, and the bereaved husband and children have the sincere sympathy of many friends.
Mrs. Richter was the mother of nine children, four of whom died in infancy. Those living are Mrs. A. F. Schemmer and W. B. Richter, of Rock Valley, Mrs. Fred Haas, of Omaha, Nebraska, E. H. Richter, of Madison, S.D., and Mrs. D. A. Crowley of Canby, Minn., all of whom were here to attend the funeral of their mother. She also leaves her husband Wm. Richter, and 21 grandchildren besides other relatives.
Funeral services were held at St. Mary's church in Rock Valley, Wednesday morning.
Among those from a distance who attended the funeral are Mrs. Henry Rosmiller, Burlington, Wisconsin, Mr. John Heiligenthal, Lyons, Wis., Mrs. Ben Richter, Mr. and Mrs. L. Richter, Mr. and Mrs. Frank Richter, Mr. and Mrs. Henry Hatting, and Mrs. Herman Hatting, Ashton, Iowa, Mr. Henry Gossling and daughters Anna and Clara, Remsen, Iowa.
Source: Rock Valley Bee, December 3, 1926.
Her husband's obituary (Sioux County Capital, Nov. 12, 1936) gives her maiden name as Mary Richter. 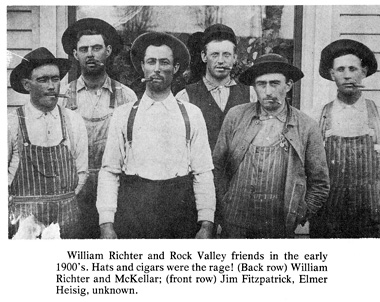