This story was taken from the Sioux Center Centennial book of 1991 page 361 and was submitted to the book by Henry and Lenora Heynen. It was transcribed for this BIOS by Beth De Leeuw and some research notes were added by Wilma J. Vande Berg both of the Greater Sioux County Genealogical Society.

This third generation family was the first Heynen family to come to the United States from Holland, and settle here in Sioux County. The family of Antonie Heynen, born October 21, 1839, and died November 5, 1922, was married to Grada Levenkamp Heynen, born April 5, 1844 and died March 25, 1914. Born and married in Groot Dochtren, Laarden, Netherlands.

Their children were Hendrik Jan, Wilhelmina (Mena), Willem Johannes, Johanna (Hannah) and Carrie. Hendrik Jan was born February 7, 1868 and married Cora Brink. He became a minister and started many Christian Reformed Churches in this area. Wilhelmina (Mena) was born July 29, 1871 and married Meinerd Vander Heide who was also a minister in the Christian Reformed Churches. Willem J., my father, was born February 19, 1877, who married Fanny Jager, was a farmer. Johanna, born January 3, 1880, married Steve Hulstein who was also a farmer. Carrie, born November 23, 1882, married John M. Voortman, a Christian Reformed minister also. This whole family is buried in the Sioux Center Cemetery.

This family was looking for spiritual and material opportunities so the eldest son, Hendrik Jan, convinced his parents he should go to the U.S. and look around since his dad was also a farmer. He arrived in 1892 and moved to the Levenkamp farm west of Sioux Center. In May 1893 the rest of the family came to this area. The boat they came on had several more people aboard who settled in this area. In December of 1893 they bought a farm 2 miles north, 1 mile west, and ½ mile north of Sioux Center, which became the Heynen homestead. In 1904 Willem J. got married and moved to this farm. All his children were born and raised here.

In May of 1895 a cyclone came through and pretty well destroyed the farm. Several people in the area were killed. My Grandpa was reading the paper, Grandma was baking bread, and my father was outside. He told my grandparents it looked like a bad storm was coming. Not knowing anything about cyclones, they paid no attention. My father went outside when the storm hit. He was standing beside a small tree and hung onto it. He had a broken collar bone after being hit by bricks flying from the chimney. When he looked around Grandpa was walking in the yard dazed, but Grandma was missing. They saw the cookstove laying in the grove with Grandma partly underneath it. The stove was leaning against a small tree which had kept the hot stove off her body. They noticed she was still breathing and after cleaning her up she seemed o.k. Their neighbors were standing outside and their baby was sucked away from her mother. The baby was found dead in the grove by my grandparents. After the storm my grandpa said, Were going right back to Holland. This is no place to live with storms like they have here. But the neighbors and church people said no well help you get started again. A Christian Reformed Church was organized at that time in Sioux Center and my grandparents were charter members and my grandfather was an elder.

Submitted to the book by Henry and Lenora Heynen

BIRTH record of Antonij Heijnen on 21 Oct 1839 at Warnsveld, Gelderland. His parents were Hendrik Jan Heijnen a farmer age 52 and Janna Heuvelman.

MARRIAGE record of Antonij Heijnen, a farmer age 27 to Grada Levenkamp age 23, His parents were Hendrik Jan Hijnen and Janna Heuvelman, Her parents were Willem Levenkamp and Fenneken Heuvel, married 10 May 1867 at Laren Gelderland, Netherlands.

OBITUARY of Grada Mrs. Antonie Heynen 1844-1914
Source: Find a Grave
Born: April 5, 1844
Died: March 23, 1914
Grada Levenkamp was born on April 5, 1844, in Laren, Gelderland, Netherland, the daughter of William and Frenneken Levenkamp. She married Antonie Heynen in 1868. They had four children in twelve years.
Grada Heynen died on March 23, 1914, in Sioux Center, Iowa, at the age of 69, and she was buried at Memory Gardens Sioux Center Cemetery, Sioux Center, Iowa.
-----
Source: Alton Democrat issue of 4 April 1914, Sioux Center column.
Mrs. H. Beltman of Alton was here to attend the funeral of Mrs. Heynen. 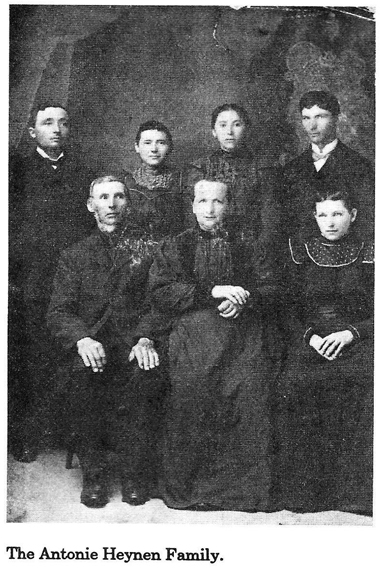