This story was taken from the Sioux Center Centennial book of 1991 page 360 and submitted to the book by Esther Beirma Cain. It was transcribed for this BIOS by Beth De Leeuw and some research notes were added by Wilma J. Vande Berg, both from the Greater Sioux County Genealogical Society

Hermanus Bernardus Heusinkveld was born September 11, 1847 at Varsseveld, Province of Gelderland, The Netherlands. He was the second child of a family of eight. His father was Evert Heusinkveld, born in 1814. His earliest ancestor of record of Hendrik Jan Heusinkveld, actual birth date unknown, but it was about 50 years after the Dutch Republic had begun the decline from its position as the great commercial leader and naval power of Europe. The early Heusinkvelds were well-to-do, having large investments in government bonds, and were a family of rank. When Napoleon conquered The Netherlands in the late 1700s, the bonds were cancelled, and the family was reduced to want.

Evert Heusinkveld, Hermanus father, married quiet, industrious Willemina Johanna Pennings. Willemina received a fine dowry from her parents when she married Evert. They lived in Varsseveld, where Evert kept an apiary and sold honey and wax in season. In winter his chief occupation was making wooden shoes. Six of their eight children were born in Varssseveld. In August, 1855 the family sold out and went to America by sailing vessel. Hermanus was eight years old. They were 48 days on the ocean, landing in New York. From there they went with an immigrant train to Milwaukee, and then by team and wagon to Alto, Wisconsin, about 90 miles. The trip took one week. After paying passage for his family to America, Evert did not have much money left. He was able to buy only 80 acres of woodland, mostly uncleared. There he built a log house and moved in on March 1, 1856. Twenty-eight days later baby William was born in this cabin. Another son, Hendrik Jan, was born in 1859. Later that year the family moved to Greenleafton, Minnesota, where Evert died in 1895.

In 1871 Hermanus married Jacoba Mensink and started housekeeping in a small house built with limestone blocks. It was later enlarged, but of frame construction. Their farm was near Greenleafton, Minnesota. His principal occupation was farming, but he also enjoyed doing blacksmith work, and was known for his wood-chopping ability. Five children were born between the years of 1875-1882, but none lived beyond the age of six. In April of 1881 three died of diphtheria within a period of three weeks. Later two more children were born, but they died in infancy. Hermanus and Jacoba then started another family: John, born in 1883; Evelyn, born in 1885; David, born in 1887; and Harvey, born in 1889.

Having lost their first family of five, they could not forget the memories, and they moved to Maurice, Iowa in 1891. Herman went into business with his brother, William, who owned a general store. When the building burned in 1893, Hermanus bought land from the Great Northern Railroad Co., known as farm Jim Hill, across the railroad tracks, west of Sioux Center. There were no buildings on the land, so he built a barn, and they lived in it while the house was being built. During this time, another son, Mark was born in 1893. Twin girls, Emma and Ella, were born in 1895. This was the family farm for 25 years and here all the children grew up. Hermanus and Jacoba moved to town in 1918 and lived there the rest of their days. Jacoba died in 1927; Hermanus, in 1932.

John, the oldest child, married Lena Alkema. They had three boys, Bernard, Lester and Elmer. Lester lived in Sioux Center until his death in 1984. His widow, Etta, continues to live in Sioux Center. Evelyn married Richard Klomp, and they had two children and lived in Zeeland, Michigan. David married Elizabeth Van Brussel, and they lived in Ames, Iowa, Urbana, Illinois and Mt. Pleasant, Iowa. When Betty died in 1964, Dave moved back to Sioux Center and lived there until his death in 1968. Harvey married Julian Bliedorn, and they farmed near Pipestone, Minnesota. Mark married Ruth Burpee, and they had two girls. They lived in Omaha, Nebraska, and later in California, where both died. Emma, one of the twins, married Henry Snyder, and they farmed near Edgerton, Minnesota. They had three children. Emma now lives with her daughter, Nora, in Santa Paula, California. She is now the only living member of the second family of seven. The other twin, Ella, married John Bierma, and they lived in Sioux Center all of their married life, until Johns death in 1975. They had one daughter, Esther. When she and her husband moved to Arizona in 1980, Ella moved with them and lived in Green Valley until her death in 1988. She was buried in Sioux Center.

OBITUARY of Herman Bernard Heusinkveld 1847-1932
From the Alton Democrat, December 16, 1932, Sioux Center news:
H. B. Heusinkveld Came From Holland On Sailing Vessel.
H. B. Heusinkveld, a respected resident of this community for 40 years, passed on at his home here Friday, having been taken ill the preceding Tuesday with a stroke of apoplexy. He was 85 years of age and exceptionally active for a man of his years. Only a few weeks before his illness be returned home from Minnesota, where he assisted his son-in-law with corn picking.
Mr. Heusinkveld was born in Alten [i.e., Aalten], Gelderland, Holland on September 11, 1847. He emigrated to the United States with his parents in 1855, the family embarking on a sailing vessel, which required over forty days for the trip, the boat having been becalmed in mid-ocean for many days. The family settled at Alto, Wisconsin in September, 1855, but in the fall of 1868 moved to Greenleafton, Minnesota. On Dec. 1, 1871, he was married to Jacoba Mensink. Of this union 12 children were born. The first five died in early childhood, three of them within 19 days in April 1880. In October, 1891, the family moved to Maurice, Iowa, where they lived for 16 months and then moved to a farm near Sioux Center, in March, 1893. Mr. and Mrs. Heusinkveld retired from farm life in February 1919 and came to Sioux Center to live. Mrs. Heusinkveld died on February 11, 1927.
Seven children survive their father, namely: John of Sioux Center; Evelyn, Mrs. R. Klomp of Holland, Mich.; David of Holgate, Ohio; Harvey of Edgerton, Minn.; Mark of Omaha, Nebraska; Emma, Mrs. H. Sneiders of Edgerton, Minn.; Ella, Mrs. John Bierma, Sioux Center.
Mrs. Klomp and David Heusinkveld and others of the children arrived the first of the week to attend the funeral services which were held at the home and Central Ref. church Tuesday, in charge of Rev. De Jongh of Rock Rapids.
* * * * * * * * * *
Similar obituaries were published in the Sioux Center News, December 15, and De Volksvriend, December 22. They add that he is also survived by one brother, Dr. H. J. Heusinkveld of Fulton, Illinois.
His death certificate gives his full name, Herman Bernard Heusinkveld; born September 11, 1847 in the Netherlands; resident of the U.S. 77 years and of Sioux Center 40 years; parents, Evert Heusinkveld and Johanna Penninga; widower, wife Jacoba Mensink; retired farmer, total time in this occupation 62 years, last worked at this occupation Feb. 1919; died at 5:15 p.m. December 9, 1932 cause, apoplexy, onset December 7; contributory cause, hypertension. 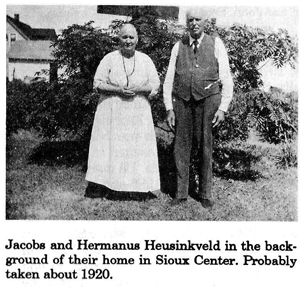