Alyda Rozendaal was born January 7, 1874 in Barneveld, The Netherlands to Hendrik and Willempje (Van De Brink) Rozendaal. She had 4 brothers and sisters and 1 half brother. Alyda did not have an easy childhood. Orphaned at age 7, she had to start working for others at the age of 12. A wealthy farmer hired her to herd and milk cows. The hours were long and it was not unusual for Alyda to fall asleep as she was milking. She felt uncomfortable with the farmers two daughters, sure that, when they were laughing and giggling with their boyfriends, they were laughing at her, the poor orphan. She longed to see her own sisters, but that was seldom possible since they too worked elsewhere. The farmer had a large pear tree full of luscious pears, but they were not to be eaten, as all were to be sold. Alyda, however, would secretly pick up a few that had fallen to the ground, hide them in her clothes, and eat them as she herded cattle. Alydas pay for a full year of work was room and board and a pair of wooden shoes. A bar of soap once received as a rare gift was long treasured by her.

Upon the encouragement of their friend Henry Vonk who had emigrated to the United States a few years earlier, the Harskamp family, desiring to seek a better living, packed their belongings and set said from Rotterdam for America aboard the ship Noordam on February 18, 1910. This was quite a step for 50-year-old Father, Mother, and 12 children. Aboard ship Alyda had her hands full with toddlers and a 1½ month old baby, and the older children, who she thought would help her, were seasick. The steward treated her kindly, allowing her to wash the diapers and hang them out on the open deck to dry overnight even though that was really not permitted.

The family arrived at Ellis Island, New York on March 4, 1910 and traveled by the Lackawanna and Chicago and Northwestern Railroads to Ireton, Iowa where they were met by Henry Vonk. Jan rented an acreage ½ mile west of the Old Town, just across the railroad tracks, where they milked a few cows. They lived here a year while Jan worked as a day laborer for Mr. Zeutenhorst, walking the 2 miles to his farm each day. During that year an outbreak of diphtheria and scarlet fever among the children caused the family to be quarantined for 6 weeks. Ed and Henry were very ill, Dr. A.C. Jongewaard telling the parents that Ed and possibly Henry would not survive. A special nurse was hired, and Jan himself cut 24 willow sticks each day, placed a cotton ball on the tip, and swabbed their throats every hour. Miraculously, the children recovered.

In 1911 Jan was encouraged by Cornelius Van Roekel to start farming for himself, but when Jan replied that he had no financial resources, the medical bills having depleted what he had, Cornelius loaned him the needed capital. This loan was formalized with only a handshake, Cornelius telling Jan that he believed his word was as good as his signature. The family rented a 160 acre farm from R.A. Zimmerman in section 4 of Center Township, 6 miles west of the Old Town, and lived there for 5 years. It was here that daughter Alyda was born on December 18, 1913 and son John was born on April 29, 1915. John died 3 weeks later.

In 1916 the family moved to a half-section farm 7 miles west and ¼ mile south of Sioux Center in section 8 of Center Township, also owned by R.A. Zimmerman. It was here that Minnie became very ill of a ruptured appendix and almost died.

The Harskamps were members of the Central Reformed Church until 1913 when they transferred their membership to the newly organized Nederduitsche Gereformeerde Kerk, now The Netherlands Reformed Congregation. Jan was one of the original consistory members, serving as a deacon from 1913-1926 and as an elder from 1926-1928. The family went to church for morning and afternoon services (in Dutch), taking their noon lunch along to eat in the church basement between services. Each service lasted about 2 hours.

There was plenty of work on the farm to keep all the children busy, but there were also times for play and leisure. The family owned 3 or 4 bicycles, so evenings when weather permitted the children would cycle to their neighbors. Outdoor games included Fox and Geese in the winter snow and Hide and Seek. Evenings indoors were spent playing I Spy, dominoes, or made-up games. No playing cards were allowed. Although the children knew their father as a strict man, one of whom spiritual matters were very important, they also recall with fondness his ability to recite Dutch poems, some evidently quite humorous, for hed laugh so hard the tears would roll down his cheeks.

While most of the familys food was produced right on the farm (eggs milk, butter, meat, vegetables), some shopping was done locally in Sioux Center, and whenever cattle were sold, Jan, Alyda, and several of the children would travel to Sioux City. Parking their car in Leeds, they rode the streetcar into the city, dropping the women off downtown to shop while the men rode on to the stockyards. Occasionally a new suit was bought there for $10-$15.

Jan was known for his fondness for automobiles. His first auto was a Metz roadster, traded from Gerrit Van Voorst for a horse. Unfortunately, Jan had to push the car uphill, not realizing it more than one gear! After that he bought in succession a new 490 Chevrolet, a new Willis Overland, a used 7-passenger Chandler touring car, and a 1928 Chevrolet.

Jan gave each of sons a used car at age 21 and $500 when they married, except for Bert, who opted for a new car (a 1929 Model A Ford) and no cash. Each of the daughters received furniture when she married.

In 1923 or 1924 Jan and Alyda visited their homeland, accompanying Jans son Dick who went back to live in the Netherlands. Jan and Alyda became naturalized citizens on January 4, 1927.

After Jans death, Alyda spent several winters in southern California in the homes of her daughter Minnie and her son Bert. On June 25, 1940 she married Cornelius Schelling (born September 14, 1872) a widower with grown children. Cornelius died on February 14, 1947, and in 1950 Alyda moved into the new home built for her by her son Ed at 418 1st Ave. N.W., where she lived until her death in the Community Hospital on May 28, 1959 at the age of 85 years. Both Jan and Alyda are buried in Memory Gardens Cemetery in Sioux Center.

Gilbert remained single. He lived on a farm he and his father purchased 2 miles west of Lebanon, 1 mile north, and ¾ miles west, in section 21 of Garfield Township. He was found dead in his hog yard, apparently of a heart attack, on November 17, 1953.

Submitted to the book by Donna Beernink

Netherlands records were found on www.wiewaswie.nl

OBITUARY of Jan John Harskamp 1859-1933
Source: Sioux Center News (9-28-1933)
Born: September 9, 1859
Died: September 25, 1933
John Harskamp, longtime Sioux Center resident passed away at his home Monday, September 25. The immediate cause of the death was arterio sclerosis. He was seventy four years old.
Mr. Harskamp was born in the Netherlands in 1859 living there for some time before coming to America. He was united in marriage to Alyda Rozedal. For forty eight years Mr. Harskamp was a successful farmer, retiring and moving to Sioux Center several years ago.
Funeral services were held in the "Nederduitsche Gerefomeerde" church Friday, with the Rev. John Vander Hoef of Rock Valley officiating.

OBITURY of Alyda Mrs. John Harskmap, later Mrs C. Schelling 1874- May 28,1959
Hawarden Independent of Thursday Jun 4 1950
Rites Held for Mrs. Schelling
Funeral services for Mrs. Case Schelling, 85, mother of Mrs. R. Schelling of Hawarden, who died Thursday at a Sioux Center Hospital were at 1 oclock Tuesday afternoon at the Cooperative Fruineral service Little Chapel and at 2 oclock at the Netherlands Reformed church in Sioux Center. Three of the church elders officiated with the burial at Sioux Center. Mrs. Schelling was born in 1874 in the Netherlands. She married John Harskamp in 1895. The couple came to Soux County in 1910 and farmed until 19e30 when they retired and moved to Sioux Center, He died in 1933.
In June 1940 she married Case Schalling, who died in February 1947.
Survivors include six sons, Dick in the Netherlands, Henry of Orange City, and Jake, Gerrit, Ed and Bert all of Sioux Center; six daughters Mrs. J. Vierwinden of Houston TX, Mrs. W. Wallenburg of Rock Valley Mrs.Schelling of Hawarden, Mrs. P. Vander Weide of Sioux Center, Mrs. R. Ravenswaay of Chino CA, Mrs. H. H. Vande Vegte of Orange City; 53 grandchildren and 101 great grandchildren. 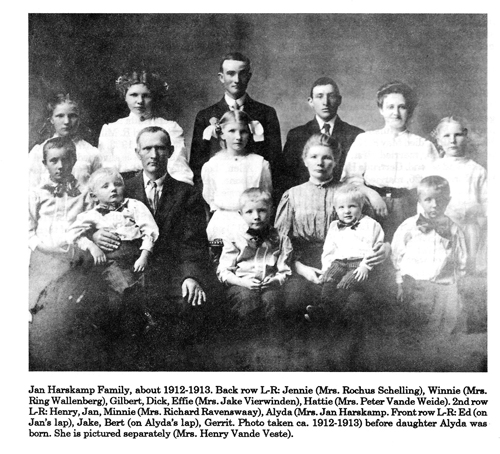