This story was taken from the Sioux Center Centennial book of 1991 page 353, and submitted to the book by Jean Meengs Kosters and Ruth Kosters Wells. It was transcribed for this BIOS by Beth De Leeuw and notes were added by Wilma J. Vande Berg, both of the Greater Sioux County Genealogical Society.

Hendrickus D. and Aaltje (Bonnekhorst) Kosters had five sons and two daughters. Aaltje contracted cancer (kauker) and died in 1879. Hendrickus was a widower for two years and at the age of 52 he married Fenne (Lefers) Kosters in 1881. Aaltje Alice (Kosters) Hamstra was born May 13, 1883 on a homestead 80 acres, 1 mile south, 2 miles west and ¼ mile south of Sioux Center. She had 2 younger brothers  John William Kosters born 3/8/1885 and Gerrit John Kosters born 10/1/1887.

Alice was a very independent, self-sufficient young lady, often working for other families in the area. For many years even after her fathers death, she lived with her mother. When her mother passed away, a widow with a 7 year old son came to live with her. She became very proficient in the art of crocheting, as her fingertips were very sensitive. She also sewed many of her own clothes on her pedal type sewing machine and did a lot of hand mending. Alice planted, weeded, harvested, and canned her own beans, peas, and other produce. She stayed active and healthy throughout her life.

Religion was very important to Alice and going to Gods House on Sunday was something that she really looked forward to.

Alice was united in marriage to John Hamstra 2/23/34, a widower with 2 sons, William and Clarence. Alice and John traveled to Europe twice by boat and spent several months visiting relatives. They were married for 33 years. John passed away in 1967. She lived alone for 2 years, sold her home and moved into the nursing wing at the Sioux Center Hospital in 1964. She appreciated being read to and enjoyed visiting with her friends and relatives. She passed away on July 18, 1982 at the age of 99 years, 1 month, and 29 days.

See the story of Hendrikus Koster and Aaltje Boonekhorst for more family details.

OBITUARY of John Hamstra 1875-1967
Source: Sioux Center News (5-25-1967)
Born: June 21, 1875
Died: May 17, 1967
FUNERAL SERVICES HELD MONDAY FOR JOHN HAMSTRA
Funeral services for John Hamstra,91, a resident of Sioux Center for approximately 40 years were held at the First Christian Reformed Church here at 1:30 P.M. Monday.
He died at the Sioux Center Community Hospital May 17 following an illness of several weeks duration.
Services were conducted by the Reverend Richard DeRidder and burial was made in the Sioux Center Community Cemetery under the direction of the Co-operative Funeral Services.
Mr. Hamstra was born in The Netherlands June 21, 1875, and grew to manhood in Holland. He moved to the Rock Valley area in 1920 and later lived at Fairview, South Dakota and in Ireton community before settling in Sioux Center.
Following the death of his first wife in 1933 he was married to Alice Koster of Sioux Center February 23, 1934.
Survivors besides his widow include two sons, William of Merrill and Clarence of Norwalk, California; a sister in the Netherlands, nine grandchildren and six great-grandchildren. 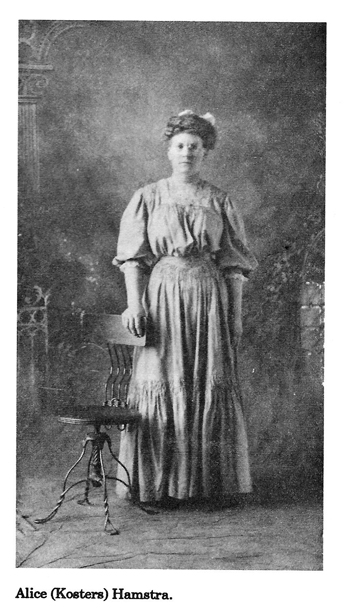