This story was taken from the Sioux Center Centennial book of 1991 page 363 and 364 and was submitted to the book by Henry and Lenora Heynen. It was transcribed for this BIOS by Beth De Leeuw and some research notes were added by Wilma J. Vande Berg both of the Greater Sioux County Genealogical Society.

Dad Heynen did much for the Bethel Christian Reformed Church in that he was in the consistory many years both as deacon and elder, he taught catechism, read sermons during vacancies, he kept record of all the sermon texts of each minister. He was director of Welcome Twp. #4 school many times. We walked ½ mile to school every day. The older ones went to the Christian school when there was one to drive the horse and buggy, else they went to the country school. Dad was very strict with being on time. My mother was also very active in church work. She also was a midwife helping deliver babies in the neighborhood and taking care of new mothers and babies. As long as they lived on the farm there was no electricity and all dirt roads. Mom was scared of the mud as we always had to go up a steep incline over a railroad track, in fact she wanted to get out and walk. Years ago we had a washing machine with a treadmill for the dog to run on and turn the wash machine. The dog got smart and sometimes he was missing. We were promised a radio as soon as the hogs got to be 5¢ a pound, but when they got to be 4¾¢ a pound my dad bought a used radio. We lived ½ mile from the mail box and every noon wed take a horse to get the mail. We never owned a bicycle  my dad said better take a horse.

Our parents were strict and religious, we had a very close family and were thankful for the Christian upbringing we had, but coming from Holland they believed in progress in home, church and school.

Submitted to the book by Henry and Lenora Heynen

BIRTH record of Wubbechien Jager on 14 May 1883 at Winschoten, Groningen, Netherlands to Hilke Jager a farmer age 32 and Derkje Meijer. American given name Fannie Jager.

OBITUARY of William J. Heynen 1877-1966
Source: Sioux Center News (11-17-1966)
Born: February 19, 1877
Died: November 8, 1966
Mr. William Heynen passed away at the Sioux Center Community Hospital, Tuesday evening, November 8, 1966. He had reached the age of 89 years, 8 months, and 19 days. Mr. Heynen was born in the Netherlands and came to America at an early age. He was united in marriage to Fannie Jager on April 19, 1904 and to this union the following children were born: Grace, Mrs. Sam Altena, of Sioux Center; Hilbert of Hull; Daisy, Mrs. John H. Den Herder, of Sioux Center; Minnie, Mrs. Marion Wiersma, of Orange City; Tony of Sioux Center; and Henry of Sioux Center. He is also survived by 21 grandchildren; and 31 great-grandchildren.
His wife, Mrs. Fannie Heynen preceded him in death on July 21, 1960. Two sons died in infancy. Also a brother, three sisters and two grandchildren preceded him in death.
Mr. Heynen served as an Elder and Deacon for many years in the Bethel Christian Reformed Church.
Funeral services were held at Vander Ploeg Funeral Home at 1:00 and at 1:30 at the First Christian Reformed Church. Burial was in Sioux Center Community Cemetery on November 11, 1966.

OBITUARY of Fannie Mrs William J. Heynen 1883-1960
Sioux Center News July 28, 1960
Rites Held Here Monday for Mrs. Wm. J. Heynen, 77 Funeral services were held at the Bethel Christian Reformed church In Sioux Center at 1:30 p.m. Monday, July 25, for Mrs. William J. Heynen, 77, long time resident of this vicinity, who died at the Sioux Center Community hospital Thursday evening following a few weeks illness.
Services were conducted by the Rev. Clarence Van der Plate and burial was made in the Sioux Center Community cemetery under direction of Vander Ploeg's Funeral home of Sioux Center. A brief service for members of the family was held at the Funeral home preceding the service at the church.
Mrs. Heynen, nee Fannie Jager had resided In this area since 1903. She was born in The Netherlands May 14, 1883, and resided there until the age of 11 when she moved with her parents to Kansas. A year before her marriage to William J, Heynen April 19, 1804, Mrs. Heynen moved to Iowa.
Survivors include her husband of Sioux Center, three sons, Hilbert of northwest of Sioux Center, Tony and Henry of Sioux Center; and three daughters, Grace (Mrs. Sam Altena) of Sioux Center, Daisy (Mrs. John H. Pen Herder) of Sioux Center and Minnie (Mrs. Marion Wiersma) of Orange City. Twenty grandchildren and 13 great grandchildren also survive her, along with one sister, Alice (Mrs. Andy Wouters) of Lynden WA. Two grandchildren, three brothers, and four sisters preceded her in death.
Mrs Hynen was a member of Bethel Chr. Ref. Church and the Bethel Ladies Aid. Pallbearers were Senard Altena Wilmer Altena, Gerald De Herder, William Gene Heynen, James Heynen and Gary William Heynen. 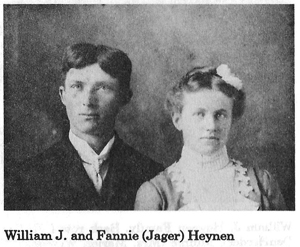