This story was taken from the Sioux Center Centennial book of 1991 pages 239 and 240; it was submitted to the book by Wilmyna Jansma, It was transcribed for this BIOS by Beth De Leeuw and research notes were added by Wilma J. Vande Berg, both of the Greater Sioux County Genealogical Society.

In the year 1893, Derk Bleyenberg and Aartje Lagerwy were united in marriage in the Netherlands. They had a family of five children, four girls and one boy when they decided to move to America in Feb. 1902. The childrens names were Hendrika (Hattie), Jannetje (Jenny), Aartje (Ida), Berend (Ben), and Gerritje (Gertie).

Derk did some farming and bought and sold some cattle. He also peddled milk using a dog to pull the cart.

Seeing there was no future in Holland they decided to take that big step to move to the U.S. Uncle Henry Vonk was already living near Sioux Center. Uncle William Vander Weide came a year later. They packed their belongings in a trunk, 3 feet wide, 4 feet long, and 3 feet deep. We still have the old trunk.

That trip took at least 5 weeks. The boat trip took about 3 weeks. When they arrived in New York they had to stay at least a day and a night on Ellis Island where all immigrants had health inspection and vaccinations. They must have been at least 3 days on a train. They landed in Maurice, Iowa and had a lunch by Evert Van Maanen. This whole trip must have been quite an experience. Gertie was only 4 months old. As Holland is only about one fourth the size of the state of Iowa, I wonder what went through their minds as they traveled halfway across the U.S. How they got to Sioux Center from Maurice I never heard.

Their first home was on the spot where the First Reformed Church is now standing. Father Bleyenberg got a job on the farm of Ed Doornink. That is the land where the Coop Cattle Confinement now is. He walked the four miles twice a day earning $1.00 per day. If the weather looked stable in the evening he sometimes stayed overnight. The people were very tornado conscious, as a big tornado had hit the area a few years before. One evening the weather looked very nice so Dad stayed on the farm. That night a storm struck the community which lasted a large part of the night. Mother with her brood of little ones went to the old Vander Ploegs house. He was the grandfather of Art Vander Ploeg. Mother and the girls wore wooden shoes and had left them outside. The next morning there were no klompen. They had blown away. A big loss, Im sure. The church building had collapsed during the storm and much damage was done in the area.

We then moved to a house about a block north. Later we moved west across the railroad tracks where Reinard Dykstra now lives. Gerrit was born here.

In the fall of the year Dad worked for Henry Wandscheer who owned a threshing machine. All the grain was stacked in those days. Dad had to pitch the bundles into the machine earning $1.25 per day. They started at sunrise and worked till dark. Sometimes he would stack the straw and get a bonus of $1.00.

The next place we lived was a 120 acre farm across the road of where brother Dick now lives. That is the land where Van Regenmorter has his chicken ranch and where the new housing area is being developed. On this place Dick and Bess were born.

After a few years we moved 3 miles west to the farm where John Vander Hoef lived. It was when we lived here that Dad went to visit the Old Country. I think it was in 1912.

After a few years Mother moved to a house just east of the Standard Station. This is now a parking area of Case Van Velzen. Here Mother passed away on April 2, 1946, at the age of 73.

NOTE: This story was written by Ben Bleyenberg as he remembers their history and was read at a Bleyenberg get-together on Nov. 7, 1980.

BIRTH RECORD for Derk Bleijenberg born to Berend Bleijenberg a gardener age 39 and Hendrika Engelen, he was born 17 Dec 1867 at Bennekem Ede Gelderland Netherlands. He was married Apr 1893 at age 25 so that would make his birth about 1868

OBITUARY of Derk Dick Bleyenberg 1867-1938
Source: Sioux Center News(12-15-1938) Birth record - 1867- death - 1938
Born: 1876 (error)
Died: December 9, 1938
Friday morning at eight oclock, Mr. Dick Bleyenberg, Sr. passed away at his home here. He had been ill for several months, with heart trouble. He would have been 71 years old Saturday of this week.
He was born and raised in Holland, coming to America with his wife and small children about forty years ago. The past forty years he has lived in Sioux County, all but fifteen of them in Sioux Center. Three sons and five daughters survive besides his wife, Aartje (Laerweg) Bleyenberg. The children are: Ben, Gerrit and Dick, Jr., all of Sioux Center; Mrs. M. Vander Hoef of Ireton; Mrs. J. Meidema of Sioux Center; Mrs. William DeVries of Alton; Mrs. Lane Schelling and Mrs. Jake Harskamp both of Sioux Center. Twenty-eight grandchildren also survive.
Funeral services were held in the Old Reformed Church Monday with Rev. Mr. Vander Hoef of Rock Valley officiating. 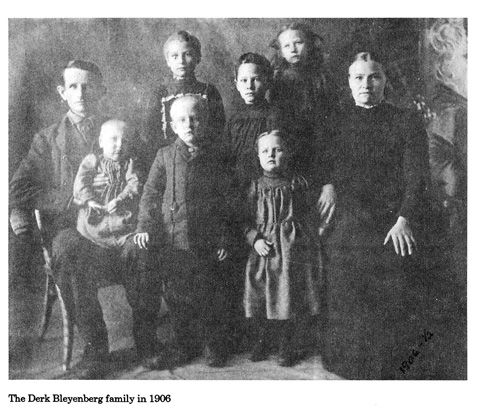