This story was taken from the Sioux Center Centennial book of 1991 page 421and 422 and it was submitted by Lorraine Van Ravenswaay. It was transcribed for this BIOS by Beth De Leeuw and research notes were added by Wilma J. Vande Berg, both of the Greater Sioux County Genealogical Society.

Dirk Lammers was born February 3, 1865, the son of Gerrit Jan and Hendrika (Kastein) Lammers. Dirk came from the Netherlands with his parents and brothers William, Ralph and sister Johanna in 1867. They settled in Alto, Wisconsin. Dirk and his brother William came to Sioux Center at the age of about 18 looking for work. Dirk worked as a hired man for a Borgman farmer that farmed where the Sioux Center Hospital now stands. Dirk married Hermina Neikamp (Nykamp) on April 20, 1888. They farmed 1½ miles west of Sioux Center. This farm was homesteaded by Herminas parents. Dirk and Hermina raised 11 children of which one died in infancy. Dirk, Hermina and the oldest three children were charter members of the First Christian Reformed Church. Dirk (Dick) passed away at his home of cancer on October 5, 1944.

Hermina was born August 27, 1863 in the Netherlands to Gerrit and Jennie (Jeneke) Lennink Neikamp. She came to America at the age of 4 with her parents and settled on the farm which is now located in West Branch Township. She often talked about the hardships of blizzards and grasshopper plagues that were experienced by the early pioneers. Hermina passed away in the LeMars Sacred Heart Hospital on December 21, 1935. She was experiencing problems with cancer for which she was being treated. She died of a blood clot in her leg.

Elizabeth was born September 1, 1902 and married Edward Van Donge. Elizabeth died of scarlet fever shortly after her marriage on October 13, 1920.

Submitted to the book by Lorraine Van Ravenswaay

The researcher could not find the actual birth record for Hermina on the date given by family tried Neikamp/Nijkamp/Niekamp etc. The marriage record of her parents was found and lists Gerrit Nijkamp born Rijssen age 36 married Jenneken Leunk 34 on 25 Aug 1860 at Rijssen, Zwolle Overijssel.
A birth record for Hermina Nijkamp born at Rijssen to Gerrit Nijkamp and Jenneken Leunk was born 4 Sep 1861 at Rijssen. No other Hermina was found in that time period. Several babies with the name Aaltje were born and two died.

See the BIOS for Gerrit Niekamp 1823 and Jennie Leunk family

OBITUARY of Derk Dick Lammers 1865-1944
Dick Lammers Dies
Mr. Dick Lammers passed away, at his home here on Thursday morning, Oct. 5, 1944 after a lingering illness due to cancer. He had reached the age of 79 years.
He is survived by four sons and four daughters namely John Lammers of Alton; Mrs. John Addink of Sioux Center; Henry Lammers; Mrs. Art Franken; Mrs. Louis Klein; Ralph Lammers; Mrs. Bart Van Donge; and William Lammers of Sheldon, also 41 grandchildren and 18 great grandchildren and two brothers, William Lammers of Sioux Center; Ralph Lammers of Wisconsin; and three sisters, Mrs. Evert Te Paske of Orange City; Mrs. Godfrey Beckman of Artesia. Calif, Mrs. Gerrit Schut.
Funeral services were held on Monday afternoon, Oct. 9 at the home and at the Second Christian Ref. Church with Rev. Oliver Breen officiating. Burial was made at the local cemetery.
Mr. Lammers was born in the Netherlands on Feb. 3, 1865 and came to America in the year of 1867 and settled in Wisconsin. In the year of 1888 he was united in marriage to Hermina Nykamp who preceded him in death on Dec. 21. 1335. Also preceding him in death were three children, Gerrit, Mrs. Ed Van Donge and one daughter who died in infancy.
From the Sioux Center News, October 12, 1944

OBITUARY of Hermina Mrs. Dick Lammers 1861 or 1865? -1935
Sioux Center News December 26, 1935
Funeral services for Mrs. Dick Lammers, who died Saturday in a LeMars hospital were held Tuesday at the Second Christian Reformed Church, Rev. J.M. Dykstra officiated. Burial was in the Sioux Center cemetery.
Mrs. Lammers was 72 years old at the time of her death. About a year ago her health began falling, and late this summer she was a patient at the Sacred Heart hospital in LeMars for a few weeks, being treated for cancer. Less than two weeks ago she again entered the hospital for treatment. A blood clot forming in one of her legs was the direct cause of her death.
Hermina Niekamp was born Aug. 27, 1863, in the Netherlands. When four years old she came to America with her parents, and made their home in Michigan for six months. Then they moved to Virginia, where they lived for 2 years, and from there they moved to New Jersey. A year later they moved to Iowa and made their home near the present site of LeMars. In 1887 she was united in marriage to Dick Lammers. They homesteaded on a farm between Sioux Center and LeMars. Eleven children were born to Mr. and Mrs. Lammers. One died in infancy, a daughter, Lizzie died fifteen years ago and a son, Gerrit passed away 8 years ago.
Surviving Mrs. Lammers are her husband; eight children, Mrs. John Addink, Mrs. Art Franken, Mrs. B. Van Donge, Mrs. L. Klein, Ralph, Henry, all from Sioux Center; John, Alton; William, Sheldon; 37 grand children and two great-grandchildren.
Mrs. Lammers has lived through many hardships experienced by the pioneers. She often told of the blizzards and grasshopper plague as well remembered by early settlers. 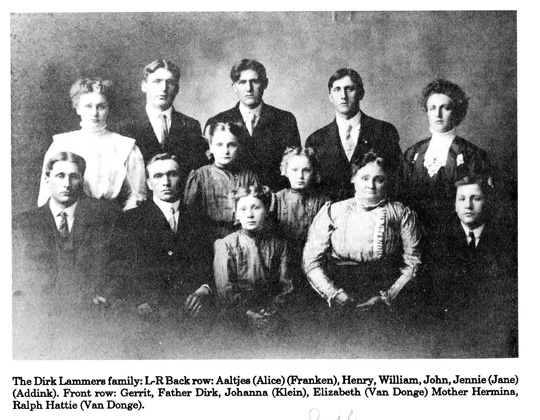