The Kuhls were among the original thirty-seven homesteaders that settled in Sioux County near Sioux Center, in the early 1870s. In the year 1870 there were a group of five families that came here by way of Muscatine, Iowa. These five families were the families of Frederick Kuhl, Frederick Cleveringa, Broer W. Jansen, John Pekelder, and Gerrit Postema. The Kuhls and Mrs. Cleveringa were of German descent, and the rest of the group are believed to have been from Gronigen, Netherlands. The Muscatine group had been in this country longer than the other local homesteaders. Pekelder had served in the Civil War.

The Dutch people in this group had lived in Bloomington, Illinois in 1853 before coming to Muscatine. Frederick Kuhl was of German descent. He had come to Muscatine previous to 1870 and there he married Fredericka Bauer. Fredericka and two sisters came to America about 1855 as very young girls from Wisner, Germany. One sister was Wilhelmina (Mrs. Frederick Cleveringa) and the other is unknown. The Bauer sisters lived in Muscatine and that is where they married Frederick Kuhl and Frederick Cleveringa. There was quite a bit of interlocking sibling marriages among this group of pioneers. Mrs. Kuhl and Mrs. Cleveringa were sisters, Grietje (Mrs. B.W. Jansen), Swaantje (Mrs. John Pekelder) and Fred Cleveringa were brother and sisters. No information has been found to date on Gerrit Postema and if he was indeed also married to a sibling of the others. For more information on this group read the story of Frederick and Wilhelmina Cleveringa.

The Kuhls homesteaded a piece of prairie at the site of the present Aubrey Altena farm. They had come on the 400 mile journey from Muscatine by wagon. They had taken a few of their possessions along. The trip was long and hard. They built a dugout as a first home and then slowly built the farmstead. They first attended the Reformed Church in Orange City, and then the Reformed Church in Sioux Center. The Kuhls had at least two children prior to settling near Sioux Center and had at least seven children born to them. Tragedy struck the family in 1880 when they lost three children to diphtheria.

The families of the three children that reached adulthood are as follows:

Anna Kuhl was born March 15, 1870 and she married Willem Hulshof on December 24, 1889. They moved away from Sioux Center in the mid 1890s. They are believed to have gone to Glen Allen, Washington County Mississippi as reported in the Sioux Center newspaper that she died about August 9, 1897. Yahoo, Mississippi was also mentioned. They had two daughters born while they were members of the First Reformed Church in Sioux Center. They were Cornelia born September 25, 1890 and Fredericka born September 9, 1892.

Frederick Kuhl was born December 21, 1881, he married Hattie Vander Ploeg on December 4, 1902. They farmed near Sioux Center and were the parents of seven children: Jacob, Rieka died as a child, Fredericka Rieka (Mrs. Jim Westra), Frederick, Gilbert, Elsie (Mrs. Joe Baker) and Harry Kuhl of Sioux Center. See the story on Frederick Kuhl Jr. for more details on this family.

Submitted to the book by Wilma J. Vande Berg

OBITUARY of Fred Kuhl 1840-1915
Source: Alton Democrat (1-23-1915)
Born: April 23, 1840
Died: January 13, 1915
Last Wednesday evening the sad news was heard that old gentleman, Fred Kuhl had died as a result of an operation. He was an old pioneer, well known and respected and leaves much property. Funeral services were held Saturday from the First Reformed Church.
Frederich Kuhl was born in Luka, Germany April 23, 1840, came to America in April 1869, and located in Muscatine county, Iowa, where he resided three years when he came to Sioux County and located about two miles east of Sioux Center in West Branch Township, where he lived until four years ago when he moved to Sioux Center where he resided until his demise January 13, 1915. He was ever faithful to the trust committed unto him and died in faith triumphant. His last words to his faithful wife were, "The strife is ended, the victory won."
He leaves a faithful and loving wife, Fredrika (Bouwers) Kuhl; three sons, eighteen grandchildren, seven great-grandchildren and a host of friends to mourn his death. 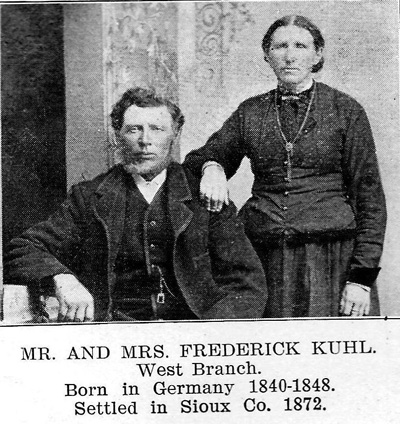