This family history was taken from the Sioux Center Centennial book of 1991 page 436 & 437. The story was written and submitted by Wilma J. Vande Berg. It has be transcribed for this BIOS by Beth De Leeuw of the Greater Sioux County Genealogical Society.

Jacob Moeller, Hans Moeller, Martin Moeller and their sister Mary (Moeller) Cordsen composed the original Moeller family that emigrated from the area of Grossold Schleswig Holstein, Germany, in the year 1881. A young lady accompanied the Moeller family to America, this was Jacobs finacee, Agenta Thomsen. The Moellers lived in the Lucerne, Iowa area for several years before moving to the Sioux Center area. Jacob and Agenta were married on March 4, 1884 at Lucerne, Iowa.

Jacob was born February 22, 1851 in Grossold, Germany and Agenta one of a family of seven was born November 19, 1858 in Schleswig Holstein, Germany. After their marriage they farmed for 35 years on their farm that was three miles west and two miles north of Kroons Corner. Jacob and his brother, Hans, served on the first board of the Farmers Co-op Society in Sioux Center that was organized in 1907. They farmed until 1918 when they moved to LeMars for eight years. They then returned to Sioux Center and lived there until their deaths. Jacob died in March of 1939 and his wife Agenta Christine died in 1953.

Jacob and Agenta Moeller were the parents of the following children:

Martin Moeller married Kate Houwers and they farmed west of Sioux Center and Martin was a local Sioux Center businessman. His family story is given separately in this book.

Rose Moeller married Louis Winterfeld and they were farmers near Lester, Iowa.

Frederick Moeller died as an infant.

The 1941 Jubilee Edition went on to tell of the whereabouts of the other brothers and sister of Jacob Moeller and at that time they were as follows:

Hans Moeller and his first wife had three children; Will Moeller from Rock Rapids, Iowa; Mrs. Harry Schlumbohm from Alvord, Iowa; and Mrs. Fred Johnson farming near Ireton. Hans remarried and in 1941 the family consisted of: Kate Moeller (deceased); Hans Moeller; and Charles farmed near Sioux Center; Mrs. Dora Prieksat of Alvord; Harry Moeller of Alvord; Emma (Mrs. Harry Serk); Annie (Mrs. Serk) and Wilhelmina (Mrs. Brontef). Hans was active on the First Cooperative Board of the Lumber Yard. Hans died in 1926 and his widow was living in Alvord in 1941.

Martin Moeller, another brother of Jacob Moeller came to America with his brothers when he was 17 years of age, and settled on a farm near Ireton, Iowa. His son, Peter, lived on the home place with him. This Moeller family consisted of Peter Moeller, Richard Moeller who farmed near Ireton, Mrs. Ed Johnson who farmed west of Ireton, and John Moeller who was postmaster at Ireton.

Marie Moeller (Mrs. Cordsen) a sister of Jacob Moeller, lived on a farm northwest of Sioux Center, but moved before 1941 with her family to Kansas City. She was the mother of Millie, John, Martin, Ben, Henry, and Walter Cordsen.

Jacobs son Martin Moeller was a prominent businessman in Sioux Center as well as his grandson Jacob Jack Moeller. Now his great grandson, Martin J. Moeller is in the insurance business, just as several of his predecessors were. Their stories are given separately in this book.

Submitted to the book by Wilma J. Vande Berg

OBITUARY of Jacob Moeller 1859-1939
Source: Alton Democrat (3-31-1939)
Born: February 22, 1851
Died: March 14, 1939
Jacob Moeller, pioneer resident of Sioux Center, died March 14, at his home here. He had reached the age of 88 years and enjoyed good health until a week before his passing when he suffered a heart attack.
He was one of the far-seeing men of the community, one of the founders and charter members of the German Farmers Mutual Insurance Company, a charter member of the Farmers Cooperative Society and secretary for many years of the Plato Township schools. He was born at Grossvold, Schleswig-Holstein, Germany, on February 22, 1851 and came to the United States 16 years ago. He was married in 1884 to Agnete Christina Thomsen. Nine children were born to the couple and were reared in the Plato Township farm home.
Surviving are Mrs. Moeller and eight children: Mrs. Ernest Klein of Sioux Falls; Peter W., Doon; Mrs. R. Witt, Le Mars; Martin T., Sioux Center; Mrs. Will Schlumbohm, Hawarden; Charles, Sioux Center; Mrs. Louis Winterfeld, Larchwood; Arthur, Ireton; also a brother, Martin Moeller of Ireton; a sister, Mrs. Q. Cordsen, Kansas City, Missouri; 20 grandchildren and nine great-grandchildren. One son died in infancy.
Funeral services for the pioneer, who was known widely for his excellent judgment, natural ability, and answering integrity, were held Thursday at the Peace Lutheran Church in charge of Reverend Hugo Boyer, with interment at the church cemetery.

OBITUARY of Agnete C. (Mrs. Jacob Moeller) 1858-1953
Source: Sioux County Index (2-19-1953)
Born: November 19, 1858
Died: February 5, 1953
Mrs. Jacob Moeller, Sioux Centers oldest resident, passed away at the community hospital on Thursday, February 5, at the age of 94 years. She had been a patient in the hospital for ten months.
Mrs. Moeller, named Agneta Christine Thomsen, was born Nov. 12, 1858 in Schleswig, Germany, and came to this country as a young girl, and was united in marriage to Jacob Moeller on March 4,1881, at Luzerne Benton County, Iowa The young couple moved to Sioux County in 1885, settling in Plato Township where they farmed until 1922. They then lived in Le Mars, Iowa for six years, after which they made their home in Sioux Center.
Mrs. Moeller is survived by eight children Addie (Mrs. Ernest Klein) of Sioux Falls, Peter, of Doon, Anna (Mrs. R.J. Witt) of Le Mars, Martin of Sioux Center, Marie (Mrs. William Schlumbohm) of Hawarden, Charles of Sioux Center, Rosie (Mrs. Louis Winferfeld) of Sioux Falls, and Arthur, of Indianola, Iowa. A son, Ernest, died in Infancy, and her husband passed away in 1931.
She is further survived by 28 grandchildren, 46 great-grandchildren and 2 great-great-grandchildren; and 3 grandchildren preceded her in death.
Mrs. Moeller was a charter member of Peace Lutheran Church in Plato Township.
Funeral services were held on Monday afternoon at the Peace Lutheran Church at Plato Township where she was a charter member. 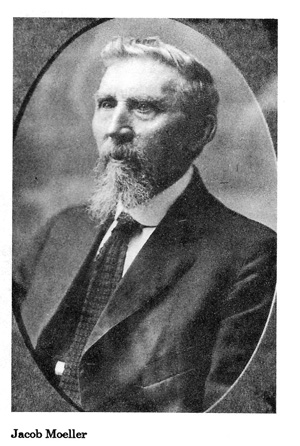