This story comes from the 1991 Sioux Center Centennial book page 438, it was submitted to the book by Neal J. Mol. It was transcribed for this BIOS by Beth De Leeuw of the Great Sioux County Iowa Genealogical Society. Some research note were added by Wilma J. Vande Berg.

The Mol Meanderings started when the two Mol families came as immigrants from Nunspeet, Gelderland, The Netherlands. Cornelius Mol, the older of the two, was born Feb. 7, 1854. He was united in marriage to Eibertje Den Herder. Four children were born in Nunspeet: Teunisje (Tillie), Annie, Jacob and a son whose name is not known. Cornelius had an intense desire to emigrate to America. It is certain that he and the family did not realize the hardships of boat travel or even the unfriendliness they experienced traveling by train to Alton, Iowa. Even so, they did not leave until a commitment was secured from the younger brother, Johannes, that he would remain in Nunspeet until their aged mother had deceased and was buried.

The Cornelius Mol family emigrated in 1889. Their youngest son, age six months, died on the train. The mother, Eibertje, was fearful that the dead child would be taken away and buried in a strange place. She held the deceased infant next to her body under a cloak until they arrived in Alton where he was buried. Eventually the family settled on a rented farm southwest of Sioux Center, Iowa. In 1890 there was the birth of twin boys of which Klaus (Clarence) was the survivor.

Tillie married Eibert Den Herder Oct. 26, 1905. After many years of hopeful waiting, they were blessed with the birth of a son, Eibert (Rev. Bert Den Herder) in 1923. Bert is retired and living in Luverne, Minnesota.

Annie died as a young woman after an extended illness. She was 23 years old when tuberculosis claimed her as a victim in 1908.

Jacob was two years old when they arrived in Alton. On Feb. 24, 1916 he was united in marriage to Gertie De Zeeuw. This union had five children. Cornelius (Neal J.) who is a retired pastor and living in Fennville, Michigan. Driesje (Dorothy) is Mrs. Wilbert Vande Berg and living in Newkirk, Iowa. Eibertje (Ethel) is deceased and her husband, Clarence J. Wiersma, lives in Minneapolis. Joanne (Mrs. Stanley Johnson) lives in Des Moines, Iowa. John, the youngest, resides in Jenks, Oklahoma.

Clarence, the youngest son, married Gertie Proper in 1917. They were blessed with five children. Cornelius (Neal C.) resides in Sioux Center. Katherine (Mrs. Francis Medema) has her home in Berwyn, Illinois. Elberta (Mrs. Henry Swaagman) lives in Randolph, Wisconsin. Peter lives on a farm in the Sioux Center area. Angeline (Mrs. Marion Boersma) is the farthest away and lives in Gresham, Oregon.

The younger of the two Mol brothers, Johannes, was born April 26, 1869. He was married to Aartje Vierhout. They had four children while living in the Nunspeet area of Gelderland: Teunisje (Tillie) Hendrikje (Henrietta), Klaus (Clarence) and Lammert (Lawrence). They emigrated after the death of Cornelius and Johannes mother, Aaltje Van Rallte) Mol. Cornelius Mol and brother-in-law, Gerrit Den Herder, paid the fare for the passage of the family to America. In 1910, they arrived in Maurice, Iowa and then lived in the Sioux Center area. Two additional children were born here: Jannetje (Jeanette) and Johanna.

Tillie (Mrs. John Pluim) is deceased; she had four children. Arthur lives in Alton, Iowa as does Alice (Mrs. Carl Heidibrink). Jean (Mrs. Roger Stenstron) lives in Alcester, South Dakota. Orville, the youngest, makes his home in Luverne, Minnesota. Henriettas first husband was John De Ryke and they had a son, Jacob. After Johns death, she married Frank Kutchenwriter and since then she has deceased. Clarence resides in Sioux Center and Lawrence is deceased. Jeanette (Mrs. John Van Holland) and Johanna, the youngest daughter, live in Sioux Center.

It is obvious that even though the roots are from the same place, Nunspeet, Gelderland, The Netherlands, very few of the descendants remained in the Sioux Center area. They have scattered far and wide across America.

Submitted to the book by Rev. Neal J. Mol

MARRIAGE of Cornelis Mol age 28 to Eibertje Den Herder age 37, His parents were Klaas Mol and Teunisje van Raalte , Her parents were Jacob den Herder and Eibertje Ponsteen, married 5 May 1882 at Ermelo Gelderland.

OBITUARY of Cornelius Mol
Alton Democrat(12-19-1931)
Cornelius Mol passed on at the home of his daughter, Mrs.E.E. Den Herder, Tuesday morning, and funeral services were held Friday at the Frist Reformed church in charge of Rev. Brunsting. Mr Mol was 77 years of age and had lived for many years in this vicinity. Other children surviving are Jake and Clarence Mol.
Sioux Center News of Thursday Dec 10, 1931 died the 8th
Mr. C. Mol and old resident of Sioux Center, passed away Tuesday morning. He was nearly 78 years old. Mr. Mol was the father of Clarende and Jake Mol and Mrs. E. Den Herder. He will be buried Friday. Services will be from the First Reformed Church.

OBITUARY of Eibertje Mrs. Cornelius Mol
Source: Hospers Tribute (3-3-1922)
Born: February 22, 1845
Died: February 22, 1922
Mrs. Cornelius Mol, aged 77 years, of Sioux Center died at the Debey Hospital. Some time ago she fell on the ice and broke her shoulder and was brought here for treatment. She passed away February 22, 1922 at Orange City, Sioux County, Iowa.
On February 22, 1845, Eibertje Den Herder was born in the Netherlands and arrived in America in 1870. She was married to Cornelius Mol in 1882. They had five children: Tillie DenHerder, Annie, Jacob, Klass, and Clarence Mol.
Mol, Eibertje Mrs. C. born 22 Feb 1845 died 27 Feb 1922
See obit of Cornelius Mol 1854-1931
Find A Grave lists Eibertje Mol born 24 Feb 1845 Hoophuizen Gelderland, Netherlands died 27 Feb 1922 Orange City IA, buried in Sioux Center. Husband Cornelius Mol  Children Annie Mol, Tillie DenHerder, Clarence Mol and Jacob Mol.
Death record lists her parents as Jacob Den Herder and Eibertje Ponstein.
------
Sioux Center Nieuwsblad of Mar 1, 1922 ( In Dutch)
Translated:
Monday evening Mrs. C. Mol in the hospital in Orange City at the age of 77 years. The funeral will take place on Friday at 1.30 pm at the house of Mr. and Mrs. E. E. Den Herder in town and at two o'clock in the Eerste Ref Church. The deceased is mourned by her elderly husband and three children. J. and Clarence Mol and Mrs. E. E. Den Herder as well as the children in law and grandchildren
1920 census of Welcome Tsp lists Cornelus Mol abt 1855 wife Eibertje abt 1846

OBITUARY of Johannes Mol
Sioux City News(7-25-1946)
Mr.Johannes Mol,77, year old Sioux Center resident passed away early Monday morning at his home. He had been ailing for some time due to heart trouble and was confined to his bed for the last three weeks.
Mr. Mol was born at Nunspeat, Netherlands, on April 26, 1869. On November 1, 1902 he was united in marriage to Aartje Vierhoust. To this union six children were born. Tillie (Mrs.John Pluim) of Alton; Henneritta(Mrs. John De Ryke), Clartence, Laurence, Janet (Mrs. John Van Holland)and Johanna all of Sioux Center. All of the children survive him with their mother an also five grandchildren and one greatgrandchild.
Mr. and Mrs. Mol and family came from the Netherlands about 36 years ago and lived in the Sioux Center vicinity since that time. They farmed for the firtst years and then moved into town. Mr. Mol worked for the town until about thirteen years ago of which he retirted.
Funeral services were held on Wednesday afternoon July 24, at 1:30 o'clock at the home and 2 o'clock at the Central Reformed Church. Rev. Raymond Meeng officicated. Burial took place at the local cemetery.

OBITUARY of Aartje Vierhout Mrs.Johannes Mol
She was born 14 May 1882 Volendam Noord Holland died 6 May 1965 Sioux Center IA.
Sioux Center News of May 13, 1965
Funeral Held Here 1:30 Saturday for Mrs. Johannes Mol Funeral services were held at Central Reformed church here at 1:30 p.m. Saturday for Mrs. Johannes Mol, 82, a resident of Sioux Center vicinity for 55 years, who died at the Sioux Center Community hospital here Thursday following an illness of six months duration. Services were conducted by the Rev, Marion Klaaren and burial was made in the Sioux Center Community cemetery under the direction of the Cooperative Funeral Home. Mrs. Mol was born May 14,1882, in The Netherlands, She was married there to Johannes Mol. They came to the United States in 1910 and farmed near here before moving to Sioux Center in 1921. Mr. Mol died July 22, 1946. Survivors are two sons, Clarence and Laurence, both of Sioux Center; four daughters, Mrs. John Pluim of Alton, Iowa, Mrs, Frank Kutchenwriter of Iowa City, Iowa, Mrs. John Van Holland and Miss Johanna Mol, both of Sioux Center; a brother and a sister in The Netherlands; five grandchildren and 11 great-grandchildren. 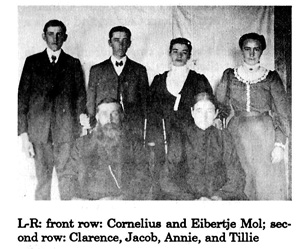