This story comes from the Sioux Center Centennial book of 1991 page 473 and was submitted to the book by Dorothy M. Bomgaars. I t was transcribed for this BIOS by Beth De Leeuw associated with the Greater Sioux County Genealogical Society. Some Research Notes were added by Wilma J. Vande Berg

Albert was born in Michigan to Jan Poppen and Trientje Mulder. These parents were born in Germany, Bentheim and Staphorst, which was close to the border of the Netherlands. There were four boys and one girl. Albert married Henrietta Wolcott and for some reason decided to move to the windswept prairies of Kansas. By the year 1885 they had four children who went with them to Kansas. Times were very difficult in Kansas; it was so dry they could not make a living, so they decided to move to northwest Iowa. John and Henry were born in a sod hut as well as the twins, Clara, and Jacob. It must have been a difficult trip to Iowa with all the children. They settled on a farm in Center Township, west of Sioux Center.

Throughout the years, life was difficult. The mother became ill and she died at a young age. The older girls had to take care of the family. One day Kate was going to light the stove with kerosene. Somehow it exploded and burns caused her death.

Clara and Jacob were twins. Clara attended Moody Bible Institute and went to Kentucky as a missionary, but she became ill with tuberculosis, and after months of sickness she died.

Many of the children attended the Northwestern Classical Academy and later went on to Hope College or graduate school. Bert became a surgeon in Muskegon, Michigan. Jake was a practitioner in Detroit and Oswego, Michigan. He too died at an early age, of a streptococtus infection. Jane married Ring Vander Schaaf, son of Auke Vander Schaaf, and lived west of Sioux Center. Margaret, Mrs. Al Van Putten, was born in Iowa. A daughter Johanna, Mrs. Herbert Van Kley, was taken in death in the 1920s. In the 30s Bert had a heart attack, and after several hospitalizations, died.

After several years, Albert remarried. Cyrus was born to them. He became a lawyer, practiced law in Muskegon and later became the official lawyer for the city.

Henry became a minister and missionary to China. He was supported by the First Reformed Church of Sioux Center. The years of his service with his wife Dorothy from 1918 to 1951 were characterized by violence, revolution, civil and international war, world chaos and internal strife. He was the pioneer in newspaper evangelism in China and served as war-time secretary of the Amoy City of Y.M.C.A. in 1938-1940. In later 1945 he returned to China and undertook a large program of operation. Because of his leadership in the Christian movement, he was singled out for a target of special attack. This resulted in a public trial before a Peoples Court composed of 10,000 Chinese. He was falsely accused, convicted, and condemned to deportation. After several days in prison, he was sent to Hong Kong by ship.

Later he became the Minister of Visitation and Senior Citizens Activities of the Garden Grove Community Church. He passed away on November 29, 1972. Alberts wife preceded him in death. She died in the early 1940s.

Above submitted to the book by Dorothy Bomgaars

Source: Sioux County Index (10-19-1944)
Born: February 28, 1860
Died: October 10, 1944
Mr. Albert Poppen of Sioux Center passed away at his home on Tuesday morning, October10, 1944, at the age of 84 years and seven months. He had been down in bed for some time due to old age and complications.
Left to mourn his departure are five children: Mrs. R.A. Vander Schaaf of Primghar; John Poppen of Sioux Center; Missionary Henry Poppen of Boulder, Colorado; Mrs. Albert Van Putten of Reading, Minnesota; and Cyrus Poppen of Muskegon, Michigan; and 22 grandchildren and 8 great-grandchildren.
Funeral services were held on Friday afternoon, October 13th, at the home and at the Central Reformed Church, Reverend Meengs officiating and burial took place at the local cemetery.
Mr. Poppen was born in Drenthe, Michigan on February 28, 1860 and lived there until he was 30 years old. He then moved to Kansas with his family where they lived for 10 years and then moved to Iowa, coming to Sioux Center where he engaged in farming until the year of 1914 when they moved into town.
He was united in marriage to Henrietta Walcott who preceded him in death in the year of 1895. In the year of 1905 he was united in marriage to Jacoba Vander Gyp who passed away in September of 1942. Also preceding him in death were five children: Kate Poppen, Dr. A.B. Poppen, Anna, Mrs. Hubert Van Kley, Clare Poppen and Jacob Poppen.
Among those who came from a distance to attend the funeral services were Dr. and Mrs. Henry Poppen of Boulder, Colorado; Mr. and Mrs. A.B. Poppen of Muskegon, Michigan; Mrs. Jake Poppen of Pella and Albert Van Putten family of Reading, Minnesota.

Mrs. Albert Poppen, 78 died on Wednesday morning enroute to the Oelrich hospital. She had been ill for several years with diabetes.
Mrs. Poppen, nee Coba Vander Gyp, was born at Middleburg Holland, the Netherlands March 29, 1863. At the age of 17 years she came to America with her parents Rev. Mr. and Mrs. C. Vander Gup. In 1904 she was married to Mr. Albert Poppen to which union one son, Cyrus Poppen was born who at present is practicing law at Muckegon, MI. 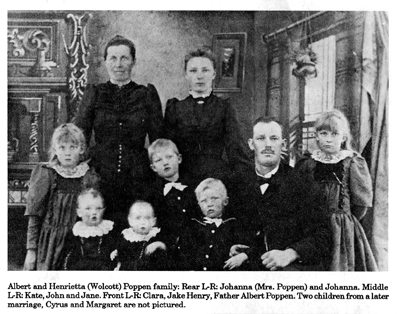