This story comes from the Sioux Center Centennial book of 1991 pages 483 and 484. I was submitted to the book by John Reekers. It was transcribed for this BIOS by Beth De Leeuw of the Greater Sioux County Genealogical Society. Research Notes were added by Wilma J. Vande Berg.

John Reekers and his wife Marigje Marie Vanden Brink came to America in February 1882 with a baby daughter. They arrived by train in Hull, Iowa and found that there was no more land in that area to homestead, so their belongings were loaded up again and they headed for the Harrison, South Dakota area where there was land available for homesteading.

John Reekers was born in the area of Nunspeet-Ermelo, Netherlands on June 29, 1856 to Aalt Reekers and Jannetje Vander Pol. John married Marigje Vanden Brink in the Netherlands and shortly after their first child Gertrude was born.

After they arrived in Plankinton, South Dakota, they homesteaded a piece of land near Harrison, South Dakota on which they built a sod home. They spent about six years there struggling to develop the farm. At one time the mother Marigje walked to town with baby and plow share in hand to have it sharpened. These years of pioneer struggles are accounted for in the book On the Reservation Border  Hollanders in Douglas and Charles Mix Counties by Henry Vander Pol, Sr. The author writes nothing was in sight when the authors parents and their friends, the Reekers and the Bovies arrived at their claims on the old Reservation Border. The first thing the homesteaders did when they arrived was to get out the break plow and find a patch of sod tough enough to build a sod home. The slabs of sod were placed criss-cross on top of each other until a desired wall height was reached. The roof was made of rough lumber with a thick layer of tar paper with dirt piled on that. The floor remained dirt for several years. All of the every day needs had to be completely provided for by the family which demanded a wide variety of struggle and hard work.

The author of the aforementioned book also relates that the father. Mr. Reekers, was fresh in his memory. He wore heavy Dutch pants and a heavy red shirt regardless of the season. He enjoyed smoking his pipe while walking around the house for exercise in the morning.

John Reekers, a grandson of this pioneer, is the recipient of an old musket loader gun that his grandfather had traded for corn with the Indians when he lived in South Dakota. After living in South Dakota the family moved to Sioux County, Iowa, and farmed near Middleburg, Iowa, for a few years and later south of Orange City, Iowa.

Gertrude Reekers was born January 17, 1882 and died April 18, 1935. She married John Ter Horst and they were from Orange City. They were the parents of five children.

Arie Reekers was born October 4, 1885 and died March 30, 1946. He married Johanna Pietenpol. They were from Orange City and the parents of two children.

Jeanette Reekers was born December 16, 1889 and died April 19, 1967. She married Abe Van Peursem. They were from Orange City and the parents of four children.

Marie Reekers was born May 14, 1892 and died May 15, 1965. She married Jake Oleman. They were from Orange City and the parents of four children.

Hattie Reekers was born July 20, 1897 and died September 3, 1947. She married John De Haan. They were from Orange City, and the parents of two children.

Above submitted to the book by John Reekers

Births and marriage found on www.wiewaswie.nl

OBITUARY of John Reekers.
John Reekers, for more than forty years one of the good farmers of this county, passed away at Orange City, Nov. 2, after long suffering from cancer.
He was born in the Netherlands coming to the United States in 1880 and to Sioux County in the year 1887. Two years later he married Miss Marie Vanden Brink, the wedding taking place in the Netherlands, and to this union eight children were born, as follows:
Mrs. A. J. Ter Horst, Orange City; Arie of Orange City; Mrs. John Van Peursem, now deceased; Mrs. A. J. Van Peursem, Mrs. J. Oolman, Mrs. Theodore Heemstra, Mrs. Jacob De Haan and John. All live in the vicinity of Orange City.
His first wife passing Beyond, the subject of our sketch was later married to Mrs. Kuiken, who survives to mourn the passing of a good husband and upright citizen.
He is also survived by two brothers, Art and Henry, both of Sheldon, and by two sisters, namely, Mrs. Henry Boeve of Hull and Mrs. Benkelman of Corsica, South Dakota.
Funeral services were held at the First Reformed Church of which the deceased was a devoted member, on this Thursday. Rev. H. Colenbrander officiating, and burial was made at the Orange City cemetery.
The host of friends of the departed extend heartfelt sympathy to the bereaved family in the loss of a sterling husband and father who helped to carve out on the prairies of Sioux county the splended future prosperity and productivity of one of the world's most fruitful agricultural areas.
Sioux County Capital, November 7, 1930
Alton Democrat, November 7, 1930

OBITUARY of Marrigje van den Brink Mrs. John Reekers.
Reekers, Marigje born 1859 died 1920 mother buried in West Lawn Cemetery Orange City IA.
Find a Grave lists Marigje Reekers nee VandenBrink born 7 Oct 1859 Ermelo Gelderland Netherlands died 1920 buried in West Lawn Cemetery Orange City IA. Husband Jan Reekers, children listed were Arie, John, Jeanette Van Peursem, Jennie Van Peursem, Arta Heemstra, Marie Oolman and Gertie Ter Horst.
DeVolksvriend of Jun 10, 1920 in Dutch
Attempted translation
Sunday morning at 9 o'clock at the age of 60 years and nine months, Mrs. John Reekers died at the home of her children and Mrs. Abe Van Peursem. The deceased had been struggling with brights disease for quite some time, but the last two weeks her condition had worsened, and she was therefore taken care of by her daughter, Mrs. A. Van Peursem. The last days she was in unconscious condition. Nine and thirty years ago in the Netherlands she was married to Mr. Jno. Reekers. About 37 years ago the couple came here and settled the first 8 Years in Harrison S. D. from there they moved to Middleburg, where they lived for three years, and the remaining 26 years they lived on the farm, south of Orange City.
Of the eight children, one of her daughters, Jennie (Mrs. Jno. Van Peursem), preceded her 4 Years ago in eternity. In addition to her sorrowful husband, she fails to regret their loss. 7 Children, Mrs. Gt. Ter Horst, Arie Reekers, Mrs. Abe Van Peursem, Mrs. Jake Oolman, Mrs. Theo Heemstra, Mrs. Jake De Haan, and John Reekters, still at home. The funeral service took place this afternoon at 2 o'clock, from the 1st Ref. church here, led by Rev. J. Engelsman. The family has our sincere participation in their loss. 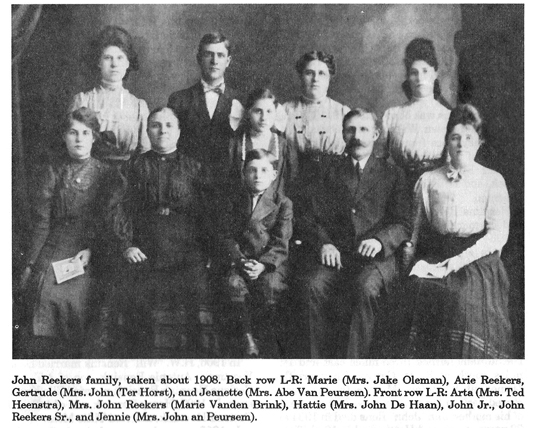