This story was taken from the Sioux Center Centennial book of 1991 page 495 and 496 , and submitted to the book by Bernice Sandbulte . The story was transcribed for this BIOS by Beth De Leeuw of the Greater Sioux County Iowa Genealogical Society. Some research notes were added by Wilma J. Vande Berg

Aartje (Schoep) Rozeboom was born Oct. 25, 1865, Epe, Gelderland (died Oct. 20, 1952). Beert Rozeboom, born July 25, 1864 Doornspyk, Netherlands (died July 5, 1956). They were married March 8, 1892. Aartje and Beert Rozeboom were not blessed with children for the first five years of their married life. They really longed to have children and when Beerts sister Aaltje (Mrs. Lou Hoksbergen) died in child birth, Lou came to them to ask if they would take his little 3 year old daughter to live with them. So, it came to be that Marguerite Hoksbergen born in 1890 came to live with them. She lived with them for only 3 weeks when she became ill and died. This was a very sad time for Beert and Aartje. Then Lou came again and asked if they would take his little 5 year old daughter Hermina Hoksbergen to live with them. Beert and Aartje just couldnt take another child for fear it too would die. After Lou insisted that they take her and Beert and Aartje had prayed about it they decided that it was the Lords will. At this time Aartje already knew she was to have a child of her own. Hermina Hoksbergen came to live with the family and stayed with them from the time she was 5 years old till she got married to Ed G. Vermeer, at the age of 20 years.

MARRIGE of Beet Rozeboom and Aartje Schoep took place March 8, 1892 in Sioux County IA.
OBITUARY of Beert Rozeboom
Sioux Center News of July 12, 1956
Funeral services for Beert Rozeboom of Sioux Center, who passed away Thursday, July 5, were held Monday, July 9 with services at the home at 1:00 and 1:30 at the First Reformed church of Sioux Center with Rev. Brower and Rev. Roggen officiating. Burial was in the Sioux Center Community with Vander Ploeg's Funeral Home in charge of arrangements. Pallbearers were John Schuiteman, John Rozeboom, Gerrit K. Vermeer, Andrew Sanko, Art B. Rozeboom, and Gerrit Rozeboom.
Mr. Beert Rozeboom passed away early Thursday evening at the age of 91 years, 11 months and 10 days. Mr. Rozeboom came to America when he was 17 years of age and moved to Sioux County where he spent his entire life. On March 8, 1892, he was united in marriage to Aartje Schoep, who preceded him in death on October 20, 1952.
To this union the following children were born: Johanna Mrs. John Schuiteman; Minnie (Mrs. Andrew Sanko) ; John; Gertrude; Rev. Gerrit; Art and Minnie Hoksbergen (Mrs. Ed G. Vermeer), One son preceded him in death, Nineteen grandchildren and 21 great grandchildren survive as well as the following brothers and sister: Lammert; Lillian, Mrs. Barney Kempers; and John. Also the following half brothers and sisters: Maggie, Henry, Gerrit, Johanna, Neal, Rich, and Minnie. The following preceded him in death: Hannes, Andrew, Allie, Annie, Minnie. Lizzie, and Jennie. One grandson, Bernard Rozeboom, preceded him on July 25, 1952.
Mr. Rozeboom served on the Consistory of the First Reformed Church for over 16 years as well as being a Sunday school teacher for many years. His passing is mourned by a host of relatives and friends.

OBITUARY of Aartje Schoep, Mrs. Beert Rozeboom
Sioux Center News of Oct 23, 1952
Funeral Today for Mrs. B. Rozeboom Funeral services will be held at 1 o'clock at the home and at; 1:30 at the First Reformed church this afternoon for Mrs. Beert Rozeboom, with Rev. P. A. De Jong officiating.
Pall bearers will be John Schuiteman, Andrew Sanko, Ed Vermeer, Ar. B. Noteboom, John Rozeboom and Gerrit Rozeboom. Arrangements are under the direction of the Vande Ploeg Funeral home, and burial will be in the Community cemetery here
Mrs. Beert Rozeboom (nee Aartje Schoep) passed away Monday evening at the age of 86 years, 11 months and 25 days. She had enjoyed good health all her life until Wednesday when she suffered a
heart attack.
Coming to America at the age of 15, she lived near Orange City at first. She married Beert Rozeboom Mar. 8, 1892, and they celebrated their 60th anniversary this spring. The following children were born to this union: Johanna (Mrs. .John Schuiteman), Minnie (Mrs. Andrew Sanko) Buffalo, N. Y.; John and Gertrude of Sioux Center; .Rev. Gerrit, West Olive, Mich.; Arthur B. of Sioux Center; and Minnie Hoksbergen (Mrs. Ed Vermeer). One son, Neal, preceded her in death. Also preceding her were two brothers. Peter and Gerrit, and 3 sisters, Mrs. E. Franken, Mrs. Wm. Remmerde and Mrs. N. Wassenaar. One brother, John Schoep, survives; also 18 grand-children, and 13 great-grandchildren. One grandson, Bernard Rozeboom, passed away in July 1952. Mrs. Rozeboom was an active church worker and was one of the first Sunday School teachers in her church, as well as secretary of the Ladies Society for over 25 years.
(Cemetery index Aartje Rozeboom born 25 Oct 1865 died 20 Oct 1952 ) 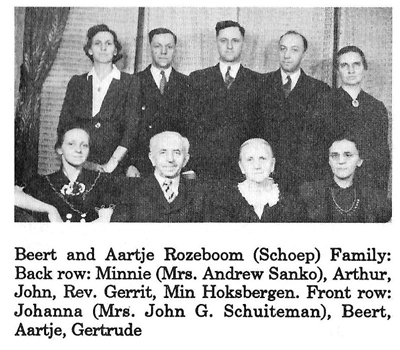