This story was taken from the Sioux Center Centennial book of 1991 page It was submitted to the book by Jean Meengs Kosters. It was transcribed for this BIOS by Beth De Leeuw of the Greater Sioux County Genealogical Society. Some Research Notes were added at the end.

John J. Riemersma was born October 1, 1857 (died 2-23-30) in Holland, Michigan. His parents. J.J. Riemersma and Jennie (Strabblina) Riemersma, came from Friesland, Holland, in the 1850s. They homesteaded on East 8th Street in Holland, Michigan. There were five children, the oldest was John J., Gerrit, Anna (Brink), Jenny (Henry Vander Ploeg), Alice (Veining) and from the first marriage a half sister Martha.

He married Sara Susanne De Wolf, born Sept. 6, 1864 (died April 16, 1949), of Rochester, New York on October 5, 1886, at Rochester, New York. She was the daughter of Peter De Wolf and Sarah De Hollander. To this union five children were born. They all attended grade school and graduated from the Sioux Center High School.

John J. (Johannes), born November 6, 1887 (died 10-10-64) in Rochester, New York. He married Madeline Van Putten in 1919, John graduated from Hope College, Holland, Michigan , with an A.B. degree in 1914. Received his Masters from University of Michigan in 1927. Taught in Holland, Michigan, High School 1915-1916. Served in U.S. Army 1917-1919. He was high school principal in Holland, Michigan until 1957. He served as director of student teaching for junior and senior high school and as curriculum coordinator. They raised three sons of Dr. Paul Harrison.

James J. (Jakobos), born October 22, 1889 (died 7-29-64) in Rochester, New York. He graduated from University of Iowa, Iowa City, Iowa. He was a veteran of World War 1. He worked as a pharmacist in Sioux Center, Iowa, and Orange City, Iowa. In March 1920, he went to Hospers, Iowa, and owned a drug store and was pharmacist there. He spent 55 years as a pharmacist. He married Mildred Wetzley on June 22, 1922, at Schleswig, Iowa. To that union three daughters were born, Lois (married John Roghair), Ruth (married Dale Stover), and Barbara (married John Keenan).

George (Gerritt) was born July 20, 1894 (died 1-22-70) in Chicago, Illinois. He was a veteran of World War 1. He worked as a bookkeeper for a number of years and for 42 years was the Manager of the Farmers Co-op Lumber Society in Sioux Center, Iowa.

Ben (Benjamin) was born October 20, 1900 in Sioux Center, Iowa. He graduated from Hope College in Holland, Michigan, with an A.B. degree in 1925. He received his Masters from the University of Michigan in 1942. He was Principal of Gobles, Michigan, High School as well as baseball and basketball coach 1929-1931. He was Superintendent at Benton Harbor, Michigan. He married Mildred Mallhagen of St. Joseph, Michigan on June 24, 1930. To that union one son, Dwight was born on Jan. 6, 1935.

Sarah Caroline was born May 29, 1905 (died 11-18-43) in Sioux Center, Iowa. She spent several years teaching in a rural school. She married Orin Franke and they lived on a farm near Ireton, Iowa.

The Riemrsma,Kosters, and Meengs connection: John W.Kosters was married to Johanna Riemersma, They and son son Francis Kosters married to Jean Meengs author of the story in the Sioux Center Centennial book. 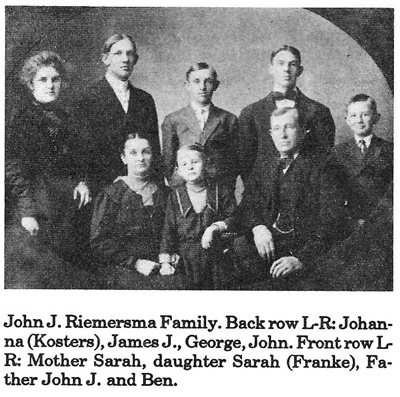