This story comes from the Sioux Center Centennial book of 1991 page.. It was submitted to the book by Davis M. Roelofs. It was transcribed for this BIOS by Beth De Leeuw of the Greater Sioux County Genealogical Society. Some Research notes and Obituaries were added by Wilma J. Vande Berg.

Daviss grandparents at Roelofs Farm in Michigan
In June of 1925, my father, Dick Roelofs was a delegate from West Sioux Classis to the General Synod meeting of the Reformed Church held in Asbury Park, New Jersey. This gave our family the opportunity to ride along as far as Michigan to the ancestral farm where father grew up.

We went in a Jewett Touring car with our suitcases and a tent packed in a frame on the running board. We could make only three hundred and eighty five miles a day, some of them over just dirt roads. We set up our tent in a town park if we could find one or we would ask a property owner if we could set up on a vacant lot for the night.

In 1851 a group of Dutchmen came from the Drenthe and Staphorst area in the Netherlands on the sailing ship Elisha Dennison from Amsterdam to New York. They went on to Michigan, about eight miles east of where Van Raalte had started the town of Holland just a few years before.

Great Grandfather and sons cleared out about forty acres in this wooded area. Some of the original woods are still along the east and the west side of the farm. This is three miles west and a mile and a half south of the present town of Drenthe. Indians and bears were seen in the area once in a while,

Dads brother Bert and Aunt Effies family were living there when we arrived. They had four sons: Dennis, Eugene, Irwin and Nathan. We soon were tearing all around the place. One morning four of us older boys were given two hoes and we were sent to a small cornfield to hoe out the weeds. We came upon a black snake about four feet long. Brother Ed and I were quite scared, but Dennis and Eugene pressed down their hoes on its tail, but it just slithered loose and went right down in a hole in the ground under a tree stump.

We had one very enjoyable day when Uncle Berts, Uncle Henrys and Uncle Johnnys families all came for a get together on Uncle Freds farm just two miles north of Uncle Berts. The next day we went a mile farther north to Uncle Henry and Aunt Emmas farm. They were building one of these large Michigan barns, where they brought all their crops inside. The carpenters made a frame work of large timbers cut on a slant and joined together with long oak pegs. They would then put together a frame for each side and for each end. Then the neighbors would come together for a barn-raising day. The men would bring long pike poles and the women would bring food. The frame work of one whole side would be raised and an end fastened to it with the wooden pegs, then the other side and the other end would be raised and put together without a nail being used. I helped paint the twelve inch wide siding boards and then they were put on vertically and then the roof were put on.

A few years ago, Uncle Johns daughter, Henrietta, Mrs. Nick Gosselink, worked out the Roelofs genealogy going back to our great, great grandfather Derk Roelofs who in the late 1790s married Fenne Zecher, Ulsen, Germany. Derks son Jan migrated to Staphorst in the Netherlands about 1799 and he married Fenmigji Bijker. They raised three sons and a daughter and were with the group that came to the farm area where Drenthe is now located. Their son, our grandfather Derk Roelofs, married to Janje Vander Hoop, born in Oudenbroek, Netherlands took over the homestead. They gave birth to thirteen children. They raised seven sons and two daughters. Four children, who died in childbirth or at a few months of age, are buried in the front yard of the ancestral farm.

Great Grandfathers family and many descendants are buried in a cemetery three miles west of Drenthe. Uncle Freds son, Donald and his family, still live in Drenthe. The small farm couldnt support so large a family so the oldest son, John, the next son Al, and my father were sent out to Iowa about 1898. I now wish I had asked father why they chose Sioux County. They had by-passed a large settlement of Dutchmen in Wisconsin and in Pella. Uncle Al married Ann Jongewaard and settled in Rock Valley. Dad and Uncle John helped to found Lismore, Minnesota, about 1900 and that is where I was born, October 31, 1909. We came to Sioux Center in 1916.

Sioux Center News April 23, 1959
Dick D. Roelofs, Long-time Resident, Dies Monday
Funeral 1:30 Today At First Church Funeral services will be held today (Thursday) at 1:30 p.m. from the First Reformed church for Dirk D. Roelofs , 89, Long-time Sioux Center resident and businessman, who passed away Monday evening at the Sioux Center Community hospital. Rev. Marion Klaaren will officiate and burial will be made In the Sioux Center Community cemetery under the direction of Vander Ploeg's Funeral Home. A brief service will be held at the Vander Ploeg Funeral Home at 1:00.
Mr. Roelofs was born October 6, 1869, at Drenthe, Michigan. He was united in marriage to Dena De Graaf June 7, 1905, at Leota, Minn. The family came to Sioux Center in 1917 from Lismore, Minn., where Roelofs was in business with his brother, John, and entered the grocery business here. This they continued until retiring In 1932. Mr. Roelofs served on the consistory of the Central Reformed church for many years, and also taught Sunday School there.
Surviving are his widow and four sons, Davis of Sioux Center, Edward of Cedar Falls, Harvey of Denver, and Stanley of Wheatoli, IL.; four brothel's, John D, of Edgerton, Minn., Fred of Drenthe, Mich., Henry of Vriesland, Mich., and Bert of Zealand, Mich., and 14 grandchildren. One daughter, Janet, who died In infancy, two sisters, Jennie and Fannie, and one brother, Johannes, preceded him In death. Pallbearers will be John Bonne ma, E. J. Kosters, Henry Franken, Elmer Duistermars, Ray Van Deest and Gerald De Weerd.

Davis M. Roelofs Born: October 31, 1909 Lismore, Minnesota Died: January 10, 2008 Sioux Center, Iowa Davis M. Roelofs, 98, of Sioux Center died Thurs. Jan. 10 at Royale Meadows Care Center in Sioux Center.
A Memorial service will be Sat. Jan. 19 at 11 a.m. at Central Reformed Church of Sioux Center with Rev. R. Van Rathbun officiating. Interment will be prior to service in Memory Gardens Cemetery of Sioux Center under the direction of Memorial Funeral Home of Sioux Center.
Roelofs was born October 31, 1909 in Lismore, MN. His parents were Dick and Dena (De Graaf) Roelofs. At age seven his family moved to Sioux Center. He received his education in the Sioux Center Schools, Northwestern Junior College and graduated from Central College in Pella. He married Margaret Dykshorn in 1935 at Fairview, S.D. They moved to their home in Sioux Center where he was employed by the Farmer's Lumber Co. He later joined in the partnership with Art Vande Berg to establish a general store. Upon Vande Berg's retirement, he became sole owner of the Roelofs Store.
He was active in the Sioux Center Civic Club and served as the treasurer for 33 years. He also served on the Sioux County Conservation Board for 21 years. He was a member of Central Reformed Church, serving as Sunday school superintendent, teacher, deacon, and elder. He enjoyed gardening, hunting, and fishing, and spent much time reading.
Survivors include his wife of 72 years, Margaret (Dykshorn) Roelofs of Sioux Center, five children, Darlene and Marion Mouw of Sioux Center, Bill and Dixie Roelofs of Sioux Center, Merry Lynn Roelofs of Baxter, MN, Mary and Steve Chapman of Lakewood, CO, and Norma and Ron Vande Bunte of South River, NJ; one brother and sister-in-law, Stan and Pauline Roelofs of Wheaton, IL; a sister-in-law Jane Roelofs of San Diego, CA; 11 grandchildren; and 14 great-grandchildren.
Preceding him in death were his brothers, Edward and Harvey; an infant sister, Jeanette; two infant grandchildren; and one great-grandson.
Source: Local paper after 1/10/2008 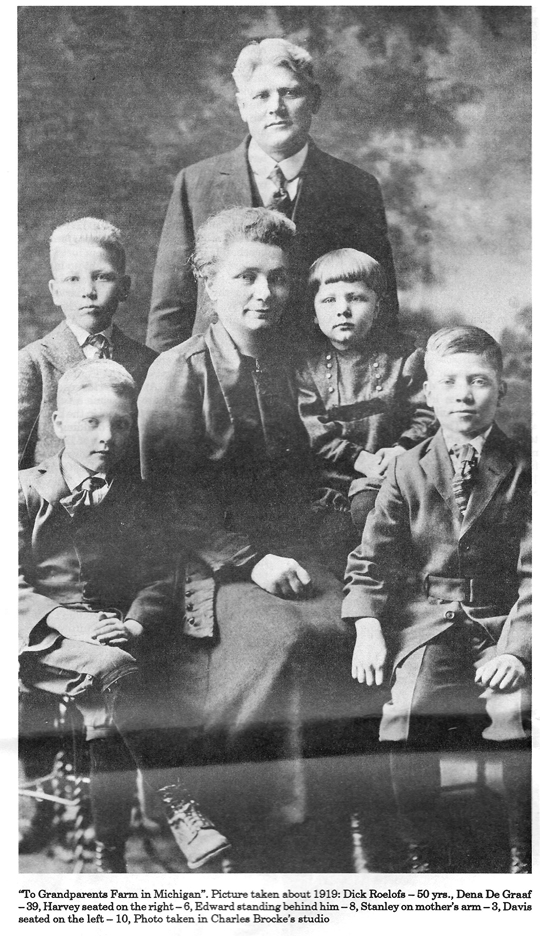