This story was taken from the Sioux Center Centennial book of 1991 page ___. It was submitted to the book by Mrs. Rena Sandbulte Remmerda. It was transcribed for this BIOS by Beth De Leeuw of the Greater Sioux County Genealogical Society. Additions added by Wilma J. Vande Berg

On January 17, 1880 Gerrit Rensink (known as G.H. Rensink) and Gazena Heunink Rensink welcomed a baby boy and they named him Henry William. He was known as H.W. Rensink.

In the Netherlands Gerdena Voortman, daughter of Manus and Reintje Voortman was born on June 5, 1877. She came with her widowed mother and three brothers and two sisters to the United States when she was sixteen years. One of her brothers, Marinus, died from a kick from a horse when a young man. Gerdena worked in different homes as a hired girl, and also worked at the Rensink home where the mother had died.

On December 6, 1906, H.W. Rensink and Gerdena Voortman were married. They continued to live on the farm that G.H. Rensink bought in 1883 from Jacob Borgman for $1600., plus $400. indebtedness. This was for a 120 acre tract of land. They lived there their entire married life.

H.W. and Gerdena Rensink were members of the First Reformed Church in Sioux Center. H.W. Rensink died February 19, 1967 and Gerdena died November 9, 1939. They are buried in the Sioux Center cemetery.

Their son Gerrit was born on September 29, 1907. He went to the country school, Welcome number 7, and worked at home until he married Cynthia Sandbulte on January 28, 1931. They farmed nearby and had five sons including twins. One of the twins died from a fractured leg at the age of three and a half years. Gerrit died October 9, 1976, and Cynthia lives in Sioux Center. Gerrit and son are buried in the Sioux Center cemetery.

A daughter Reintje Rena was born October 21, 1910. She also graduated from the country school, as did her brothers and sister. She worked at home and married Ben Sandbulte on February 17, 1932. They farmed for fifteen years. Ben then bought the John Deere Implement Shop along with Jake Huisman. Later he managed the Co-op Produce. Ben died on April 27, 1963 and is buried in the Sioux Center cemetery. They had six children, two sons and four daughters. Rena married Robert Remmerde on May 6, 1968. They continue to live in Sioux Center.

A daughter Geziena Sena was born October 3, 1912. She also went to the country school and worked at home until she married William Vreeman on June 13, 1933. They farmed at Sioux Center, Hawarden, and Sheldon, where they are now retired. They had six children, three sons and three daughters. They lost two sons that had cancer at the ages of 24 and 39. They are buried in the Sheldon cemetery.

A son Marinus was born on November 26, 1914. He worked for his father until he married Bertha Vreeman on February 6, 1935. He was a farmer and worked for Supreme Pack and is now retired. They live in Sioux Center. They had four children, two sons and two daughters. One son was still born.

A son William Henry was born March 26, 1918. He also lived and worked at home until he married Magdalena Moerman on January 31, 1940. They farmed their entire married life and had seven children, four sons and three daughters. One daughter was still born and a son 32 years of age died from cancer. They are buried in the Sioux Center cemetery. On May 21, 1976, Magdalena married Dick Fedders and they lived on his farm some years but are now retired in Sioux Center.

The G.H. Rensink farm is a century farm, having continuously been lived on by one family. These were G.H. Rensink, H.W. Rensink, Gerrit Rensink, and Wilmer Rensink.

See the BIOS of Antonie , Gerrit, and Hendrik Rensink; the three pioneer brother who came over from Holland in 1869 for more extended family history.

OBITUARIES of Henry W. Rensink 1880-1967 and Gerdina Mrs. Henry Rensink 1877-1939
Source: Sioux Center News (2-23-1967)
Born: January 17, 1880
Died: February 19, 1967
Henry W. Rensink Rites Held February 22
Funeral services were held at the First Reformed Church here at 10 a.m. Wednesday, February 22, for Henry William Rensink, 87, retired farmer and life-long resident of Sioux Center community, who died at the Sioux Center Community Hospital Sunday.
Services were conducted by the Reverend Jack Boerigter and burial was made in the Sioux Center Community Cemetery with the Co-operative Funeral Home in charge of arrangements. Pallbearers were Wilmer Rensink, Arend Sandbulte, Merlyn Rensink, Darrel Rensink, Gerrit Vreeman and Willard Rensink.
Mr. Henry Rensink was born to Gerrit and Cena (Huenink) Rensink in Sioux Center, January 17, 1880.
He was married to Dena Voortman here in 1906. After their marriage the couple farmed near Sioux Center until retiring and moving into town in 1942. Mrs. Rensink preceded him in death in 1939.
Survivors include three sons, Gerrit, Marinus and William, all of Sioux Center; two daughters, Rena (Mrs. Ben Sandbulte) of Sioux Center and Sena (Mrs. William Vreeman) of Sheldon; 24 grandchildren and 45 great-grandchildren.
He was also preceded in death by two brothers, Anthony and Henry and one sister, Lyda Doornwaard.

Source: Hawarden Independent (11-23-1939)
Birth: June 4, 1877
Death: November 9, 1939
Mrs. Henry Rensink of Sioux Center Passed Away November 9th after a brief illness.
Mrs. Henry William Rensink, 62, of Sioux Center, passed away Thursday evening, November 9th, at the Hull hospital following but one day's illness. Funeral services were held at the First Reformed church in Sioux Center Monday afternoon of last week with Reverend L. A. Brunsting in charge. Interment was at Sioux Center.
Gerdine Voortman was born in Deventer, Netherlands, June 5, 1877, but she came to America with her parents when she was 11 years old. She was united in marriage with Henry William Rensink at Sioux Center December 20,1906 and to this union five children were born. Most of her life was spent in the Sioux Center vicinity.
She is survived by her husband and five children, Mrs. William (Sena) Vreeman, Hawarden; Mrs. Ben (Rena) Sandshulte, Rock Valley and Gerrit, Marinus and William Rensink, Sioux Center. She also leaves two sisters, Mrs. Teunis Overman of Rock Valley and Mrs. Henry Van Kerkhof of Deventer, Netherlands; two brothers, Mr. Evert Voortman of Maurice and Reverend John Voortman of Kanawha, Iowa; and 10 grandchildren. 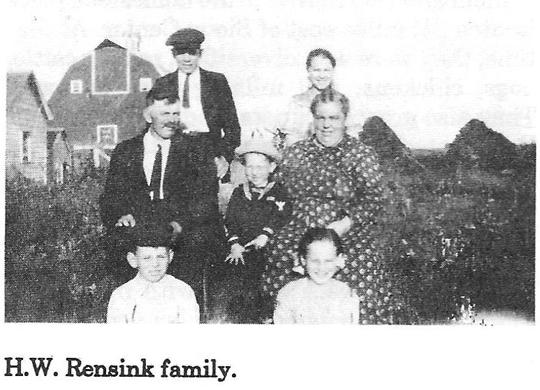