This story comes from the Sioux Center Centennial book of 1991 page 486 which was submitted to the book by Sena Rensink. This story was transcribed for this BIOS by Beth De Leeuw of the Greater Sioux County Genealogical Society. See the BIOS of Antonie, Gerrit and Hendrik Rensink pioneer families for more family history.

In October 1871, five and one-half months old Henry Rensink and his parents, Antonie T. and Gesiena Huenink Rensink came from Greenleafton, Minnesota to what was to become Sioux Center, Iowa. The family, G.H. Rensink, a single man, H.W. Rensink and wife with others traveling in oxen-drawn covered wagons had joined Jacob Koster to take advantage of the opportunity of acquiring land in Sioux County which had been opened up for settlement.

The A.T. Rensink family settled on the E ½ NW ¼ and the W ½ E ¼ of Section 2, West Branch Township. A sod hut was their home for several years and until it was expedient to build a frame house.

After his brother, Antonie Ts death, G.H. Rensink married the widow, Gesiena Huenink Rensink. The ceremony was performed in the brides house by Rev. J.M. Warnhuis. A son, H.W. Rensink also known as Will was born into this family (1-17-1880 to 2-19-1967). The family continued to live on the homestead until the time when G.H. Rensink purchased one hundred twenty acres of the NW ¼ of Section 35 in Welcome Township. This then became the family home and the homestead was rented, presumably, to a Mr. Schoolmeester.

After the death of their parents, the three brothers, Henry, Antonie and H.W. Will hired Dena Voortman as housekeeper and the brothers continued to work the land together.

As the children were growing up, they listened to their father tell stories about the early settlement days, breaking the prairie, planting corn by hand, making hay twists for fuel, prairie chickens and wolves.

A large part of the familys food was raised on the small farm. Mr. Rensink kept a large garden, apple, plum and cherry trees and a variety of berry patches. There was always plenty for the family and to share with others. Canning fruit and vegetables for winter use provided a job for everyone in the family.

During freezing weather, a steer and hog were butchered. Large pieces of beef were cured for dried beef, sausage made and both beef and pork were canned. The lard was rendered and laundry soap was made from the tallow. It would take several days to take care of the meat.

Mrs. Rensink enjoyed flowers. In a small part of the garden she grew varieties of gladiola, snap dragons and delphiniums. There were also sweet peas and zinnias. Floral arrangements were often made for use in the house. All the family admired her flowers.

The family interacting with one another and with grandparents, uncles and aunts, learned to do his/her share of the work. The father encouraged each of his children to be helpful to one another. A loving wife and mother assured her children individually of her prayers for them.

Mr. and Mrs. Rensink experienced great changes during their lifetime: from breaking virgin prairie sod with a walking plow drawn by oxen making a single furrow to tractors drawing several bottoms, harrows or discs, and planting many rows for corn at one time; from living in a sod hut to a frame or brick house with electricity, central heating and running water; and from traveling with horse and buggy to when automobiles and air travel was becoming common. They adapted well to change.

Source: Sioux Center News (7-19-1945)
Birth: April 23, 1871
Death: July 18, 1945
Death Claims Henry Rensink
Mr. Henry Rensink passed away very suddenly at his home early Wednesday morning, July 18, 1945 at the age of 74 years. He had been enjoying good health, and had done his work on Tuesday. On Wednesday morning when Mrs. Rensink woke up, she found that he had passed away.
He is survived by his wife and three children Sena, Cornie and Tony and three grandchildren. Also a brother William Rensink and a sister, Mrs. John Doornwaard all of Sioux Center.
Mr. Rensink was born on April 23, 1871 at Greenleafton, Minnesota. On January 15, 1908 he was united in marriage to Miss Tillie Moss who now survives him with the children.
Funeral services will be held on Saturday afternoon, July 21, 1945 at one o'clock at the home and at 1:30.at the First Reformed Church with Reverend L.A. Brunsting officiating. Burial will take place at the local cemetery. 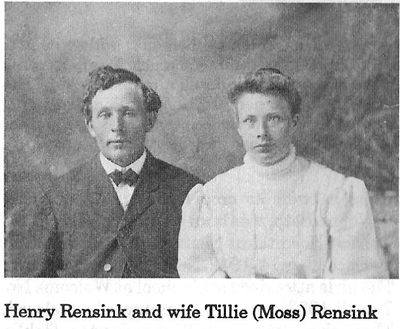