This story comes from the Sioux Center Centennial book of 1991 and was submitted by Sena Rensink pages 484 and 485. The story was transcribed for this BIOS by Beth De Leeuw of the Greater Sioux County Genealogical Society. Due to the historical pioneer importance of the Rensink brothers, more information was added to this BIOS by Wilma J. Vande Berg by way of Research Notes at the end.

In October of 1871, H.W. Rensink and wife, A.T. Rensink, his wife and five and one half month old son, Henry, and G.H. Rensink, a single man joined a wagon caravan led by Jacob Koster to what was to become Sioux Center, Iowa.

When expedient, a T model frame house and shelter for the animals and grain, were built. The house with some modifications was lived in by several families until the summer of 1987.

In 1883, G.H. Rensink bought one hundred twenty acres of land in the NW ¼ of Section 35 of Welcome Township. The family moved there and the original homestead was rented, presumably, to a Mr. Schoolmeester who later moved to Edgerton, Minnesota and to Watse Bierma.

After the mothers death and probably after the fathers death, the brothers, Henry, Antonie and H.W. Will remained in the home and continued to farm. They engaged Dena Voortman as housekeeper.

In 1907, a new barn was being built on the original homestead for the newlywed Henry Rensinks. While digging sand for the new bar from a pit located on his property, the NW ¼ of Section 12, West Branch Township, Antonie, brother of Henry was struck by a cave in. He died of internal injuries. The sand pit and the NW ½ of NW ¼ of Section 12, West Branch Township is now part of the Sandy Hollow Golf Course.

Henry Rensink and his wife Tillie built a new home on an acreage on the half-mile road which has been renamed East First Street. They lived there for most of their lives.

The Rensinks were quiet, industrious and thrifty folk. They were willing to work hard at making a living not only for themselves, but that their children, too, would be able to have homes of their own and substance to make a living.

The Rensink families have continually been affiliated with the Reformed Church of America. A.T. Rensink according to the minutes of the Greenleafton church requested his membership to be transferred to the Orange City Church when he moved to Sioux County. Later, A.T. Rensink, Gesiena Huenink Rensink and G.H. Rensink became charter members of the First Reformed Church of Sioux Center. Some served as church officers as deacon or elder. Pictures indicate that Henry attended a Sunday School class taught by Mr. Roelofs and brother, Antonies class taught by Beert Rozeboom. Henry also belonged to the young mens organization. They with others helped establish a church and institutions which have survived and prospered to this day. See the separate story for H.W. Rensink by Rena Remmerde, also the separate story for Henry Rensink son of Antonie and Gesiena Huenink Rensink by Sena Rensink.
By Sena Rensink

EVENTS of the Three brothers

DEATH of Gerrit Hendrik 1830-1903
Sioux Center Nieuwsblad of July 22, 1903
In Dutch - Translated
The old gentleman G. H. Rensink is no more. After a short illness he passed away last Wednesday at the age of 71 years. The funeral was held Friday from the First Reformed Church. Our sympathy is with the sorrowing children.
(Gerrit Hendrik Rensink was born 22 Nov 1830 Aalten Gelderland, Neth. Died 15 Jul 1903 Sioux Center IA, he married Gezina Klazina Heunink (She was the widow of Antonie T. who died in 1878 Orange City. and they had four children - Henry 1871, Lena 1875, Antonie 1877 and Hendrik William 1880.) The first three were of Antonie T. and Gezina; and the last Hendrik William 1880 was of Gerrit and Gezina

The picture as labeled in the book is rather confusing.
L-R H. W. Rensink son of Gerrit and Gezina, Gerrit H. Rensink and wife Gezina (former widow of A. T., Back Row: Antonie 1877, Henry Rensink and Alyda Rensink Children of Antonie T. 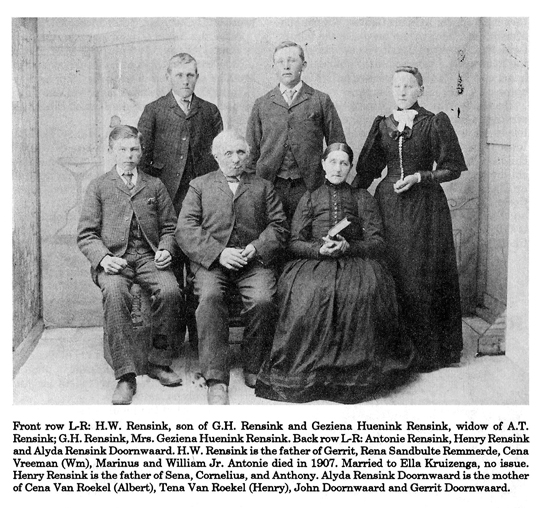