This story comes from the Sioux Center Centennial book of 1991 pages 483 and 484; it was submitted to the book by Hermina Bleyenberg. It was transcribed for this BIOS by Beth De Leeuw of the Greater Sioux County Genealogical Society. Some research notes added at the end by Wilma J. Vande Berg.

Jan Rens was born in Barneveld, the Netherlands on March 14, 1862, to Tijmen and Jannetje (de Zwaan) Rens. They farmed for a living. When Jan was 20 years old he got the urge and determination to go to America. On September 20, 1882, he left his native country and sailed for America. He first lived in Michigan and then moved to Sioux Center. Here Jan worked for a Weyenberg. He got home sick for Holland and wanted his family to come over. On June 27, 1883, his mother and the rest of the family came to America.

At that point in time, there were no railroads in Sioux Center. However, there was a train that ran from Sheldon to Hull and from Orange City to Maurice.

Sioux County land was advertised in the Netherlands newspapers at $5.00$25.00 per acre. This depended upon how close you were to town or to the railroad. On September 4, 1883, Jans mother bought a farm located one mile south and 2½ miles east of Sioux Center. She purchased it for $22.50 per acre. They picked up buffalo chips on the prairie which were used for fuel.

Gerrit Rens was born November 28, 1897 and he married Winnie Kleinwolterink on November 28, 1918. They were the parents of two children; Hermina (Mrs. Tony Heynen) and Johanna (Mrs. Fred Herweyer).

Jeanette Rens was born January 28, 1917 and married John Jack Van Middendorp. They are the parents of one daughter, Betty (Mrs. Robert Leroy Kempe).

After their marriage, the parents Jan and Hattie Rens farmed three miles east and 1½ miles south of Sioux Center. They briefly farmed at Edgerton, Minnesota, but soon moved back to Iowa. They moved on the farm of his mother. Jan John Rens died in 1934 at 72 years of age, and Hattie died in 1928. They were members of the Second Christian Reformed Church which is now Bethel Christian Reformed Church.

Written and submitted to the book by Hermina Bleyenberg

OBITUARY of John Rens in the Sioux Center News of May 3, 1934
John Rens, a Sioux County resident for the last 54 years, passed away Wednesday night. He was a native of Nuspeet (Nunspeet) Netherlands, but came to America when 18 years old in 1879. After living a few years in Michigan he moved to Sioux County where he began farming. When 26 years old he was married and was preceded in death by his wife five years ago.
Mr. Rens farmed near Sioux Center continuously for 40 years. In 1920 he retired from the farm, moving to Sioux Center. He is survived by eight children, four sons and four daughters. They are: Tim Rens, Sioux Center; Mrs. Jake Vander Griend of Orange City; Mrs. Marinus Vander Griend of Orange City; Gerrit Rens of Sioux Center; Bert Rens of Sheldon; Richard Rens of Sioux Center; Mrs. Dick Bleyenberg of Sioux Center; and Jeanette Rens of Sioux Center.
Funeral Services were held Monday afternoon at the home and at the Second Christian Reformed Church, the Rev. L Ypma officiating. Interment was in the local cemetery. 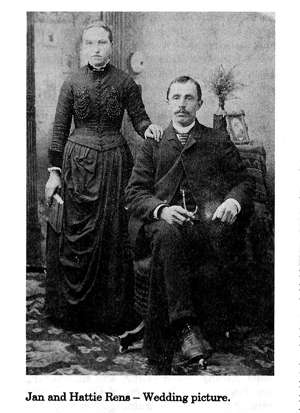