This family story is from the Sioux Center Centennial Book Pages 474 & 475, the story was submitted by Adrian Punt and it was transcribed for this BIOS by Beth De Leeuw of the Greater Sioux County Genealogical Society. Some research notes were added by Wilma J. Vande Berg at the end as well as the obits of Corneliuss parents Adam and Hendreka Schut and grandparents Cornelius Punt and Maria Helena Knook.

Submitted to the book by Adrian Punt

OBITUARY of Cornelius (C. A. )
Source: Sioux County Index (6-19-1952)
Birth: June 7, 1893
Death: June 8, 1952
C. A. Punt Dies After Long Illness
Cornelius Punt passed away on Sunday afternoon, June 8, 1952 at the Methodist hospital at Sioux City after an illness of nearly 11 weeks. He had reached the age of 59 years and one day.
Mr. Punt was born on a farm near Maurice on June 7, 1893, the oldest son of Adam Punt and Hendrika Johanna Schut.
On August 28, 1919, he was united in marriage to Johanna Franken who now survives with the 2 children, Adrian of Sioux Center and Louise, Mrs. Peter H. Vis of Rock Rapids.
He is further survived by five grandchildren, his aged mother Mrs. Adam Punt and the following brothers and sisters: Sam of Maurice, Mary (Mrs. John In't Veld) of Rock Valley, Frank of Maurice, Arie of Sioux Center, Peter of Stickney, South Dakota, Henry of Maurice, Reverend Martin of Hasbrouck Heights, New Jersey, Fannie of Sioux Center, Johanna (Mrs. Lawrence Vander Berg), of Sioux Center ,Gerrit of Maurice, and Ada (Mrs. John L. Vermeer) of Montevideo,
Minn.
He was preceded in death by his father who died December 1, 1947 Mr. Punt was very active in church and community affairs dur ing his life time. He was an elder at the First Reformed Church for 7½ years and taught Sunday school there for 24 years.
He served as a member of the board of the Farmers elevator for 20 years, acting as secretary for 11 years. He was elected to the Board of the Co-op Burial Association, and served until the time of his death, also being secretary there in 1937. He was also elected to serve on the Board of the Co-op Produce at the time of of its organization in 1941 and served all of these years also as secretary of the Farmers Produce of Sioux City.
Funeral services were held Wednesday afternoon at one o'clock at the home and at 1:30 p.m. at the First Reformed Church with Reverend P. A. De Jong officiating Burial took place at the Sioux Center cemetery under the direction of the Co-op Burial Association and six nephews served as pall bearer.

OBITUARY card of Johanna Mrs. Cornelius Punt
Born: July 3, 1897 Rural Sioux Center, Iowa
Died: September 6, 1984 Sioux Center, Iowa
In Memory of Mrs. Johanna Punt
Age: 87 years, 2 months, 3 days
Funeral Service: Sept. 10, 1984 First Reformed Church of Sioux Center
Clergy: Dr. Thurman Rynbrandt
Interment: Memory Gardens Cemetery
Memorial Funeral Home Sioux Center
Johanna, daughter of Mr. and Mrs. Evert Franken was born on July 3, 1897 at rural Sioux Center where she attended school and lived her youth.
She was united in marriage with Cornelius A. Punt of Sioux Center on August 28, 1919 at Sioux Center. Their married life was lived on a farm east of Sioux Center until 1948 when they moved to Sioux Center. Mr. Punt died in 1952. She moved to the Sioux Center Community Hospital Nursing Wing in 1967.
She passed away on Thurs. Sept. 6, 1984 at the Nursing Wing.
She is survived by a son, Adrian of Sioux Center, a daughter, Louise Vis of Rock Rapids, IA; eight grandchildren; eighteen great-grandchildren; and a brother, Rev. Henry Franken of Pella, IA.
She was preceded in death by her parents, her husband; a sister, Ella Niessink; and two brothers, Gerrit and Art Franken.
Source: Obituary card of Memorial Funeral Home

OBITUARY of Adam Punt 1865-1947
Source: Sioux County Capital (12-11-1947)
Birth: January 16, 1865
Death: December 1, 1947
ADAM PUNT: Last Thursday, December 4, funeral services were held at the First Reformed Church in Sioux Center for Adam Punt, 82 year old pioneer who passed away early Monday morning, December 1. Reverend H. Harmelink of the Carmel Reformed Church officiated, and burial was at the Sioux Center cemetery.
Mr. Punt was born at Nord Brabant, Holland, on January 16, 1865. He came to America with his parents at the age of a year and a half. The family settled in Michigan. In 1876 they came to Sioux County, living at Orange City for about a year and then moving to a farm south of town.
On May 12, 1892, he was united in marriage to Hendrika Schut and they lived on a farm southwest of Sioux Center until they retired in 1930 and moved to Sioux Center. Mr. and Mrs. Punt became the parents of twelve children, all of whom survive with their mother. The children are Cornelius of Sioux Center, Sam of Sioux Center, Mary (Mrs. John Int Veld) of Rock Valley, Frank of Sioux Center, Arie of Sioux Center, Peter of Stickney, South Dakota, Henry of Sioux Center, Reverend Martin of Hasbrough Heights, New Jersey, Fannie at home, Johanna (Mrs. Lawrence Vander Berg), Gerrit, and Ada (Mrs. John L. Vermeer), all of Sioux Center. There are 39 grandchildren and 6 great grandchildren. Also surviving are three brothers, Arie of Orange City, and Martin and Cornelius of Sioux Center, and a sister, Mrs. Kots of Long Beach, California.

OBITUARY of Hendrika Mrs. Adam Punt 1873-1954
Source: Sioux Center News (6-10-1954)
Birth: September 4, 1873
Death: June 4, 1954
MRS. ADAM PUNT
Mrs. Adam Punt, 80, who died here Friday after a long period of failing health, were held Monday June 7, at the First Reformed Church in Sioux Center. Reverend P. A. De Jong officiated. Interment was in the Community Cemetery under the arrangements of the Cooperativ Burial Association.
Mrs. Adam Punt, nee Hendrika J. Schut, was born September 4, 1873, in a sod hut on a farm near Sioux Center. She was married to Adam Punt May 12, 1892, and they made their home on a farm southwest of here for 39 years. The remainder of her life she spent in Sioux Center.
Twelve children were born to this union, of whom the following survive: Sam of Maurice, Frank of Sioux Center, Arie of Sioux Center, Peter of Stickney, South Dakota, Henry of Maurice, Reverend Martin Punt, of New Jersey, Fannie of Sioux Center, Johanna (Mrs. Lawrence Vande Berg) of Sioux Center, Gerrit of Maurice and Ada (Mrs. John L. Vermeer) of Montevideo Minnesota. Also surviving are 44 grandchildren and 21 great grandchildren.
Brothers and sisters who survive include Peter of Sioux Center, Sam of Clinton Wisconsin, Frank of Hobart, Indiana, and Sandrene of Grand Haven, Michigan
She was preceded in death by her husband in 1947, a son, Cornelius, who died June 8, 1952, and a daughter, Mary, Mrs. John Int Veld, on August 8, 1953. She was also preceded in death by three brothers and one sister.

OBITUARY of Cornelius Punt 1831  1914 grandfather of Cornelius A. Punt.
Source: Alton Democrat issue of 6 June 1914, Sioux Center column.
Tuesday afternoon occurred the death of old gentleman, Mr. Punt, of whose sickness we made mention last week. He was eighty-three years old. He came to this country in the early eighties, and acquired a great fortune, being one of the great land owners in our county. Five sons and a daughter survive him. Funeral was held Friday at the First Reformed church, Rev. Lubbers officiating.
(Note: In Iowa Deaths and Burials 1850-1990 is listed Cornelius Punt, 83 years old, widowed, retired farmer, born in Netherlands in 1831, died in Sioux Center, IA in 1914. His father was Arie Punt.
And from Find-A-Grave 1600's-Current he is listed with birthdate of 17 Jan 1831 in Fijnaart, Moerdijk Municipality, North Brabant, Netherlands. His spouse was Maria Helena Punt. He is buried in Memory Gardens in Sioux Center, IA.) 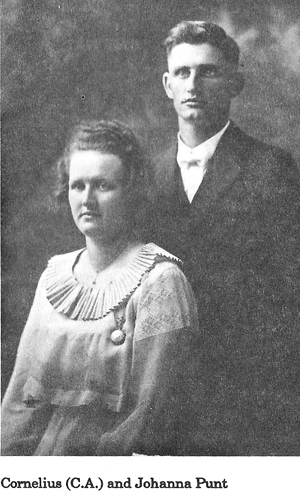