This story comes from the Sioux Center Centennial book page 481 and 482, it was submitted to the book by John Reeker. It was transcribed for this BIOS by Beth De Leeuw of the Greater Sioux County Genealogical Society and some research note were added by Wilma J. Vande Berg.

Arie Reekers was born near Harrison, South Dakota, on October 4, 1885. His parents were John Reekers and Marigje Marie Vanden Brink. His parents lived in South Dakota for about six years before they returned to Sioux County, Iowa. His parents had come to America in 1882. Their story is told separately.

On February 22, 1912 Arie Reekers married Johanna Pietenpol. She was born May 28, 1890 to Lambertus and Antje (De Vries) Pietenpol.
They were general farmers and farmed on the family farm on which later their son John farmed for 35 years after them. All of the farm work had to be done with horses at that time. They had a hired man who for quite a while was George Foreman. Arie and Johanna were members of the First Reformed Church in Orange City, Iowa.

Four children in all were born to Arie and Johanna, two baby girls died in infancy. Their two sons were as follows:

John Arie Reekers was born May 23, 1913 and he married Henrietta Vander Vegte. They farmed in rural Sioux Center. They had no children. After Henrietta died in 1980 John remarried Leona Friedrich Vanness in 1986 and they reside at 203 Michigan Ave. S.W. in Orange City, Iowa.
Arthur Lawrence Reekers was born June 26, 1918 and he married Margaret Adrianna Schuller. They were farmers north of Orange City and the parents of four children; Arie Lawrence Reekers married Nora Nadine Bloemendaal. They are from Lawton, Iowa and have two children; from Jefferson, Iowa Shirley Jean married Gary Haupart, they are, and have two children; Sylvia Arlene married Jeffery Jay Le Master, they are from Mankato, Minnesota, and are the parents of two children; and Ruth Marie Reekers lives at home and teaches at Boyden, Iowa.
Above submitted to the book by John Reekers

RESEARCH NOTES  OBITUARIES by Wilma J. Vande Berg
OBITUARY  of Arie Reekers, 1885-1946
Source: Sioux Center News (4-4-1946)
Birth: October 4, 1885
Death: March 30, 1946
Arie Reekers well know farmer of the Orange City vicinity passed on at an Orange City hospital Saturday, March 30 following a two weeks illness started with a heart attack March 9 while working on the farm. He was brought to the hospital on March 17 and while there suffered another heart attack from which he did not recover.
He was born at Harrison, South Dakota, October 4, 1885 and came at the age of nine with his parents Mr. and Mrs. Reekers, to Sioux county in 1894. The family settled on a farm near Middleburg, later moving to the Orange City vicinity.
He married Miss Johanna Pietenpol February 22, 1912 and they have lived in the Orange City vicinity since then. Four children were born to the couple, of whom two survive, with their mother. They are John A. and Arthur L. Two daughters died in infancy.
Also surviving are one brother, John J. Reekers of Orange City and four sisters: Jeanette, Mrs. Abe Van Peursem; Marie, Mrs. Jake Oolman; Arta, Mrs. Ted Heemstra and Hattie, Mrs. Jake De Haan, all of Orange City.
Two sisters preceded him in death  Gertie, Mrs. John Ter Horst in 1934, Jennie, Mrs. John Van Peursem in 1916.
Mr. Reekers was a faithful member of the First Reformed church and for many years served as a consistory member.
Funeral services were held Tuesday at the home and First Reformed Church, with Reverend H. Colenbrander officiating. Interment was in the local cemetery.

OBITUARY of Johanna (Mrs. Arie Reekers) 1890-1969
Source: Sioux County Capital (5-8-1969)
Birth: May 28, 1890
Death: May 3, 1969
Funeral services for Mrs. Arie Reekers , 78, were held Monday , May 5, at 1:30 at the First Reformed church with the Reverend R.R. Van Heukelom officiating. Burial was at West Lawn Cemetery under the direction of the Van Etten Funeral Home.
Pallbearers were Henry Heynen, Willard Van Peursem, John De Beer, Henry Bruxvoort, William Ter Horsta, and William Huisman.
Mrs. Reekers passed away at her home Saturday, May 3, after having suffered an apparent heart attack. Her body was found Saturday morning by a neighbor who had come to see her.
Mrs. Arie Reekers, the former Johanna Pietenpol, was born May 28, 1890 in Orange City. She married to Mr. Arie Reekers on February 22, 1912. They farmed in the Orange City area until Mr. Reekers passed away in March 1946. Mrs. Reekers moved to town that year.
Survivors are two sons, John and Arthur, both of Orange City, and four grandchildren, Arie, Shirley, Sylvia and Ruth Reekers.
Note: Her parents were Lambertus and Attje Zakema De Vries Pietenpol. 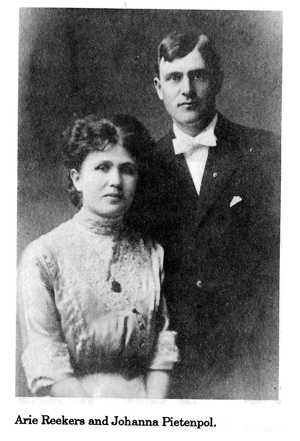