This story is from the Sioux Center Centennial book of 1991 pages 509-510. The story was submitted to the book by Bernice Bosveld. It was transcribed for this BIOS by Beth De Leeuw and some research notes were added by Wilma J. Vande Berg.

Henry James Schalekamp was born August 7, 1876 on a farm west of Orange City. He attended school in Orange City and graduated from Northwestern Classical Academy.

He investigated the school of pharmacy at Highland Park, Des Moines where he found the environment not so pleasing. After this disappointment, he taught for six years in a rural school southwest of Orange City.

He enrolled in the University of Iowa receiving his degree in 1901. At times during this period, he apprenticed in drugstores in Rock Valley and Armour, South Dakota. He charmed his grandchildren with tales of the Indians who came into Armour on Saturday nights on galloping horses, shouting their war cries.

Schalekamps Drug Store opened in 1901 in a wooden building on the east side of main street. When a tornado damaged the first location, he moved to a wooden building next door. He built the present building in 1918, modernizing it in 1948. (Story in business section).

During his more than half century in active business, Mr. Schalekamp was a leader in church and civic work. He served for many years on the consistory of Central Church, was a Sunday school teacher, and did a great deal of committee work.

He was a director of the Mutual Telephone Company for 12 years from 1910 to 1922, serving as president the last seven years. He served on the Sioux Center school board from 1919 to 1924, and was First National Bank director from 1933 until the time of his death. He had been chairman of the board since April, 1948.

A pharmacist for 53 years, Mr. Schalekamp was one of the oldest in the State of Iowa, both in years and length of service. On the occasion of his 50-year business anniversary, he received a congratulatory letter from Governor Beardsley praising him for his contribution to the development of pharmacy in the state.

He and his wife, Jenny Vander Linden, whom he married in 1903, were blessed to celebrate fifty years together.

She, in the early years of marriage, helped in the store. She had had previous experience working for her father in a retail business in Pella, Iowa.

She was active in the ladies missionary group in Central Church being chairman of the program committee for many years. She was a member of several local groups including WCTU. As a lover of flowers, she enjoyed sharing her garden with people.

They had 3 children, Marie Schalekamp who retired from Mason City Community College in 1970 where she was head of the English and Speech Departments. She taught 48 years in the schools of Iowa. William Schalekamp operated the pharmacy until his death in 1989, and Bernice, Mrs. Louis Bosveld, of Mason City.

OBITUARY of H. J. Henry J. Schalekamp 1876-1954
Sioux Center Pioneer Druggist Dies; Had Served Community Over Half Century,
Funeral Services for H. J. Schalekamp Held Monday
Funeral services were held at the Central Reformed church Monday for H. J.Schalekamp, pioneer druggist and civic leader who died at this home Friday morning at the age of 78. Rev. M. E. Klaaren officiated, and arrangements were under the direction of the Vander Ploeg Funeral home.
Special music was furnished by a quintet singing What a Comforter is Jesus and a quartet singing  The Child is King. The vocalist were Clarence Ver Hoef, William Mouw, Irvin Mouw and Mr. and Mrs. James Wandscheer. Mrs Dan Voorderman was the organist.
Active pall bearers were Ray Van Deest, Dr. B. N. Mouw, Maurice Te Paske, George De Ruyter, P. V. Mouw and Ross Vernon. Honorary pall bearers were Fred Aue, John Boeyink, H. K. Eggink, and Gerrit Pennings.
Services were held at the home at 1:30 and at the church at 2 oclock. Burial was in the Sioux Center Community cemetery.
Mr. Schalekamp had worked at the store as usual Thursday but suffered a heart attack Friday morning before going to the store. He died before a doctor could be summoned.
Henry James Schalekamp was born Aug 7, 1876 on a farm near Orange City. He attended grade school in a rural school and in 1895 took a job in a drug store in Rock Valley. Later he enrolled in the University of Iowa and received a degree in pharmacy in 1901. That same year he came to Sioux Center and started his drug store.
When a tornado damaged his first business location he moved next door to another wooden building. He built his present store in 1918, modernizing it in 1948.
CIVIC LEADER -
During his more than half a century in active business. Mr. Schalekamp was a leader in church and civic work. He served for many years on the consistory of the Central Church, was Sunday school teacher, and did a great deal of committee work. He was a director in the Mutual Telephone company for 12 years, from 1910 to 1922, serving as president the last seven years. He served on the Sioux Center school board from 1919 to 1924, and was a Frist National Bank director from 1933 until the time of his death. He had been chairman of the board since April, 1946.
A pharmacist for 53 years, Mr. Schalekamp was one of the oldest in the state of Iowa, both in years and in length of service. On the occasion of his 50 years business anniversary, he received a congratulatory letter from Gov. W, L Beardsley, praising him for his contribution to development of pharmacy in the State.
NOTE - 50th Anniversary
On November 5, 1903. Mr. Schalekamp was married to Jennie Vander Linden of Pella, who survives. Last year they celebrated their golden wedding anniversary with an open house.
Also surviving are a son, William, who operated the business founded by his father in Sioux Center, and two daughters, Marie Schalekamp, a teacher in Mason City Junior College, and Mrs. Louis Bosveld, also of Mason City. There are six grandchildren.
Additional survivors include Tena, Mrs. Henry De Jong of Orange City; Cynthia Schalekamp fo California; Amy, Mrs. Merle McNutt of Sheldon; Kate, Mrs. Martin Orton of Sioux City; Elizabeth Schalekamp of California; Lyda, Mrs. Gerrit Noteboom, and a brother Neal, both of Orange City.
He was preceded in death by a brother Dick of Sheldon, one sister, Mary, Mrs. John Van Wyke of California, and also by a step brother, Neal Kiyper of Sioux Center.

OBITUARY of Jennie, Mrs. Henry J. Schalekamp 1878-1976
Sioux Center - Mrs. Henry J. Schalekamp, 98, Sioux Center, died Nov. 22 at a Sioux Center hospital after a brief illness.
Services were held at 10:30 A.M., Nov. 24 at the Central Reformed Church with the Rev. Wesley Kiel officiating. Burial was in Memory Gardens under direction of the Vander Ploeg Funeral Home.
Mrs. Schalekamp, the former Jennie Vander Linden, was born March 21, 1878, in Pella and was married on Nov. 5, 1903, in Pella. Her husband was a pharmacist in Sioux Center for many years. He died on Sept. 10, 1954.
She was a member of Central Reformed Church.
Survivors include two daughters, Miss Marie Schalekamp and Mrs. Louis (Bernice) Bosveld, both of Mason City; a son, William of Sioux Center; six grandchildren and eight great grandchildren.
Source: Sioux Center News, December 1, 1976

OBITUARY of Diedrich Hendrik Schalekamp 1840-1917 Father of Henry Schalekamp 1876.
(De Volksvriend June 28, 1917-translated from the Dutch by Rev. Nicholas Roorda)
Monday, June 25, in the morning at 11:30, Mr. Diedrick Hendrik Schalekamp died at the age of 77 years and 5 months.
The deceased was born in Klundert, North Brabant, Netherlands on Jan. 24, 1840. After he had received good training in the Netherlands, he was offered to be steersman on a ship, which position he took and held for 13 years; he had visited many outside countries and completed innumerable journeys. In 1867 he came to America and settled in Pella.
In 1868 he was joined in marriage to Miss Adriana Johanna Korteweg. In 1870 the married couple came to Sioux County and settled on a farm southwest of town. Out of this union 6 children are still living; Mrs. J.J. Van Wyk of Santa Ana, California; Mrs. H.H. De Jong of Maurice; Henry, druggist in Sioux Center; Miss Cynthia at home; Mrs. Orton, Maurice; and Cornelius on a farm east of town. In 1882 he lost his beloved wife through death and the care of the 6 young children rested on him, of whom the youngest, an infant, was taken care of by Mr. and Mrs. L. Knook and they cared for him for many years. Soon after the death of his wife he with the children moved to the town and lived first for a while in the eastern part, then later bought the property in which the family still lives.
Being in town, the first job he had was as servant in the store of the late Mr. H. Hospers, later for Mr. Gt. Rozeboom and after that he bought with Mr. Gt. v.d.Wilt, an implement business is which he had business for 11 years. In the year 1885 he got married to the widow of Simon Kuyper, which union was blessed with 4 children; Miss Elizabeth, at home; Dick, at Fort Dodge; Miss Amelia, at home; and Mrs. Gt. Noteboom here. Besides his bereaved wife and children, he leaves still a stepson, Cornelius Kuyper at Sioux Center and an elderly brother around Bronkhorst Spruit, South Africa. For 28 years he was a deacon in the First Reformed congregation here and at the same time was treasurer of the congregation and as such rendered many trustworthy services. His seat in God's house here on earth, which until the time when he began to fail, was occupied by him regularly twice on Sundays, is now empty; but God has prepared him a better place in the heavenly mansions. Nearly until the last moment he possessed his mental facilities and assured his dear ones that he would be by his Savior soon, to whom he completely surrendered himself, and in that full confidence he peacefully and calmly fell asleep in his Savior. Since October 1916, he was suffering from a heart ailment which slowly increased. Friday there came yet lung fever, which soon made an end to life. The funeral will be tomorrow, Thursday afternoon at 1:30 at the house and at 2:00 from there to the First Reformed Church under the leadership of Rev. J. Engelsman assisted by Rev. D. McEwan from there the earthly remains will be carried by the pallbearers; Gt. De Jong, H.J. Van de Waa, Gt. Beyer, K. de Jong, F. de Haan, and K. Noordhoff. 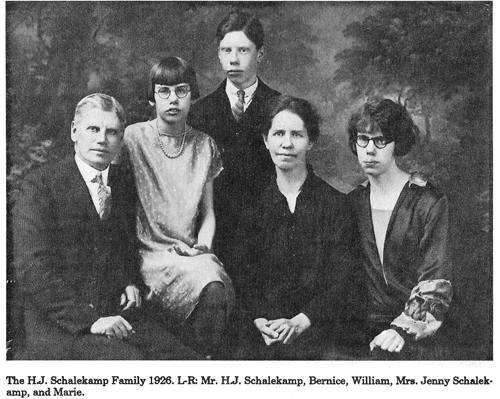