This story was taken from the Sioux Center Centennial book of 1991 page 498-499. It was submitted to the book by Elizabeth Van Maanen. It was transcribed for this BIOS by Beth De Leeuw. Research notes added at end by Wilma J. Vande Berg.

Johannes Hannes Rozeboom was the son of Jan John Rozeboom and Hermina Schipper of Elburg, Netherlands. He was born December 27. 1865 the third of the children of his fathers first marriage. Johannes father came over as a widower with eight children in 1891. (See this pioneers separate story).

Johannes married Aaltje Ella Vande Berg on September 24, 1890. Aaltje was born July 15, 1872 in Alto, Wisconsin, to John and Wilhelmina Vande Berg who later homesteaded by Newkirk in 1873 and came to live near Sioux Center in 1879. (see the pioneer story of John Vande Berg and Wilhelmina Kastein.)

Hannes and Ella farmed one mile north and three miles east of Sioux Center on a farm that he homesteaded. As a young man, Hannes would protect his claim by lying under the wagon at night when he first farmed the land. He farmed there for 27 years. The farm is still in the Rozeboom family today being occupied by Stan Rozeboom. After Hannes moved to town his son John moved there, and after John, Johns son Gerrit moved there, and then Gerrits son Stan moved on the farm.

While living on the farm the children of Hannes Rozeboom attended the country school and walked to school every day until they finished the eighth grade. One son, Gerrit attended high school at Northwestern Academy in Orange City and later became a minister.

When Hannes and Ella moved to town they lived at 227 1st Ave. S.E. which was a well built house that is still there today. They lived in that home for 21 years until Ella died of a heart attack on December 5, 1938. Hannes was a member of the Sioux Center City Council for many years and took pride in keeping Sioux Centers streets free of weeds. Hannes married Henrietta Wesselink on Oct. 30, 1941. She died May 12, 1945, and Hannes died October 24, 1949. The children of Hannes and Ella Rozeboom are as follows, four children died in infancy.

Wilhelmina Rozeboom was born July 4, 1894. On February 12, 1914 she married Jake G. Vermeer. They were from Sioux Center and were the parents of one daughter, Priscilla Vermeer who married Henry D. Kosters.

Johanna Rozeboom was born August 28, 1898 and on February 12, 1920 she married John Cleveringa. They were from Sioux Center and had no children. John died December 5, 1972 and Johanna is currently in the nursing wing at the local hospital.

Elizabeth Rozeboom was born October 5, 1906 and on July 1, 1927 she married John B. Van Maanen. They were from Sioux Center and the parents of three children: a baby girl died in infancy, Delbert Van Maanen married Darlene Ulferts, and Joan Ellen Van Maanen married Merle A. Van Roekel, John Van Maanen died October 17, 1966 and Elizabeth resides in her home at 104 1st Ave. S.E.

Above submitted to book by Mrs. Elizabeth Van Maanen

It should be noted that in the Netherlands the familys surname was Roozeboom, with two o s.

OBITUARY of Johannes Rozeboom
Alton Democrat of Nov 3, 1949 and ditto in the Sioux Center News
Hannes Rozeboom Dies At Sioux Center Mr. Hannes Rozeboom passed away at his home on Monday morning, Oct. 24, 1949 at the age of 83 years, nine months and 27 days. He had enjoyed good health until only about two weeks ago when he suffered a stroke.
Born in the Netherlands, Mr. Rozeboom came to America with his parents in his early youth. On Sept. 24, 1890, he was united in marriage to Allie Vander Berg (Aaltje Vande Berg) who preceded him in death on Dec. 5, 1938 after having enjoyed 48 years of married life.
He later married Mrs. Henrietta Wesselink on Oct. 30, 1941 who preceded him in death on May 12, 1945.
He is now survived by his six children namely: John, Minnie (Mrs. Jake O. Vermeer), Mina (Mrs. Art E. Franken), Johanna (Mrs. John Cleveringa), Rev. Gerrit of Coopersville, Mich., and Elizabeth (Mrs. John Van Maanen). Also surviving are 18 grandchildren and 8 great grandchildren. Also his aged step mother, Mrs. John Rozeboom, Sr., and the following brothers and sisters, Bert Rozeboom of Sioux Center, Andrew of California, Lammert of Sheldon. Mrs. Barney Kempers, Mrs. John Kempers and John of Steen, Minn.
Then also the following step-brothers and sisters. Mrs. Charlie Vander Berg of Crawford, Colo., Henry of Lynden, Wash., Geirlt of Orange City. Mrs. H. W. Vermeer and Neal Rozeboom, both of Sioux Center, Rev. Richard of Knoxville and Mrs. Mrs. Glen Nieford of Red Oakes.
He was preceded in death by several sisters namely, Mrs. Lou Hoksbergen, Mrs. Gerrit Vander Berg, Mrs. E. Vander Hoop and Jennie Rozeboom. Mr. Rozeboom took a very active part in all church and community affairs.
After farming for about 28 years he retired and made his home in Sioux Center. He did not retire from working however, and served as town council member for more than 28 years. He served as park commissioner until the time of his death and always was a very loyal and willing worker for community causes. He will be missed not only by the family, but also by hosts of friends.
(Some family history from the VANDE BERG book authored by Wilma J. Vande Berg 1995 Johannes Hannes Rozeboom born 27 Dec 1865 Elburg Gelderland Netherlands died 24 Sep 1949 Sioux Center Iowa. His parents were Jan Rozeboom and Hermina Schipper. Aaltje Alice Ella Vande Berg was born 15 Jul 1872 Alto WI, married 24 Sep 1890 Sioux Center IA and died 5 Dec 1938 Sioux Center IA. Her parents were Jan John Vande Berg and Wilhelmina Kastein.
Children born to them were  John H. Rozeboom 1892; Wilhelmina Mrs Jake Vermeer 1894, Hermina Mrs. Art E. Franken 1896; Johanna Mrs. John Cleveringa 1898; Gerrit J. 1901;Elizabeth Mrs. John B. Van Maanen 1906.)

OBITUARY of Aaltje Ella Alice Rozeboom 1872-1938
Dec 8,1938 Sioux Center News
Mrs. J. H. Rozeboom Passes On From Heart Attack Mrs. J. Hannes Rozeboom (Alice/Aaltje Vande Berg) passed away at her home Monday afternoon at 5 o'clock from heart failure. The first intimation of being ill was a heart attack while attending church Sunday, Nov. 27. She was taken home then and since then has had some chest pains which we diagnosed as pleurisy. Last Saturday a doctor was consulted but she was improving so her condition was not viewed with alarm
Monday afternoon, however, while Rev. Brunsting was visiting Mr. and Mrs. Rozeboom she had an attack; the doctor was called but she passed on a few minutes after he arrived. Mrs. Rozeboom was 66 years old.
She came here with her parents from Alto, Wisconsin 65 years ago. Her maiden name was Ella (Aaltje) Vander (Vande) Berg married Johannes Hannes Rozeboom 48 years ago in September. September, they have lived in this community ever since, for 27 years on the farm and for the past 21 years in the town of Sioux Center.
Surviving her besides her husband are their six children: John J. H. Rozeboom, Mrs. Jake G. Vermeer. Mrs. Art E. Franken, Mrs. John F. Cleveringa. Rev. Gerrit John Rozeboom. and Mrs. John B. Van Maanen. All the children live in this community except Rev. Gerrit John who is pastor in Lansing. Illinois. There are 17 grand children.
Mrs. Rozeboom comes from a family of nine children and she is the first to pass on.
Her surviving brothers and sisters are: Gerrit Vander Berg. Ben Vander Berg, Ralph Vander Berg John Vander Berg of Hull, Mrs. Jake Gorzeman of Hull, Mrs. G.A. Van Roekel. Mrs. John De Roos of Grand Rapids, and Mrs. Anna De Roos of Oakland, California.
The funeral will be held Friday, 1 o'clock at the house and 1:30 o'clock at the First Reformed Church. Mayor TePaske, Town Clerk Elmer Straatsma and the councilmen will be honorary pall bearers. Regular pall bearers will be the six sons and sons in law.
(Some family history from the VANDE BERG book authored by Wilma J. Vande Berg 1995
Johannes Hannes Rozeboom born 27 Dec 1865 Elburg Gelderland Netherlands died 24 Sep 19149 Sioux Center Iowa. His parents were Jan Rozeboom and Hermina Schipper. Aaltje Alice Ella Vande Berg was born 15 Jul 1872 Alto WI, married 24 Sep 1890 Sioux Center IA and died 5 Dec 1938 Sioux Center IA. Her parents were Jan John Vande Berg and Wilhelmina Kastein.
Children born to them were  John H. Rozeboom 1892; Wilhelmina Mrs Jake Vermeer 1894, Hermina Mrs. Art E. Franken 1896; Johanna Mrs. John Cleveringa 1898; Gerrit J. 1901;Elizabeth Mrs. John B. Van Maanen 1906.

From more on the ancestry of Johannes Rozeboom/Roozenboom and wife Aaltje Vande Berg, see the Bios stories of his parents Jan Rozeboom 1840-1830 and Hermina Schipper and that of Jan Vande/Vanden Berg 1845- 1907 and Wilhelmina Kastein. 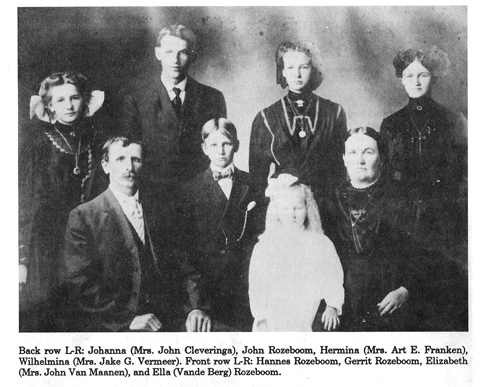