This story is from the 1991 Sioux Center Centennial book and is a combination of two stories submitted by the children, namely Melvin 1923 and Peter 1909, sons of Peter and Grace Veenis Schouten. The story of Melvin and Joann Vander Maten was submitted by JoAnn Schouten the story of Peter Schouten was submitted by Mary Bonnema. Both of these stories had previous family history of Peter and Grace Schouten in them. Those stories were transcribed for this BIOS by Wilma J. Vande Berg, and some research notes were attached at the end.

PETER SCHOUTEN 1909 and Celia Blankespoor Family by Mary Bonnema
Peter Schouten was born on October 1909 in Utrecht, Netherlands. He was the third oldest of six children born to Peter and Grace Schouten. In 1920 the family decided to come to America. They left behind their family business. Schoutens Milk Store An uncle in Inwood would sponsor them. So on the ship Rotterdam They went. After many days they landed in Hoboken New Jersey. Their first impressions were amazement of how many people there were. From there they went by train to Lu Verne Minnesota, and continued on till they reached Rock Valley where they farmed.

On April 28,1911, Celia Blankespoor was, born in Rock Valley. Her parents were Maas and Magdalena Blankespoor. She was the oldest of four children. She lived in Rock Valley till meeting Peter Schouten. They were married on October 8, 1931,on her parents farm south of Rock Valley.

After marriage they left for California with Petes sister Margaret and her husband Adrian De Bie where they all worked on a dairy. After a year they came back and started their own business. From 1935 to 1938 Pete was owner and operated the Skelly Gas Station, located then on Southern Highway 75.

In 1938 Pete bought into Ver Hoef Motor Company. But after three years, he was facing military service in World War II and sold his interest in the business.

Now leaving behind a wife and four young children, he was shipped overseas to Germany. After serving three years in the army as a sergeant in the 125th engine battalion, he found himself in the Battle of the Bulge. While crossing the Remagen Bridge he was shot and wounded. After being in many hospitals he was sent home on Jun 1, 1945.

In 1946 he opened the Western Auto Hardware Store. There he stayed for 25 years till his retirement in 1972. They were both active members of the First Christian Reformed Church where Pete as usher for many years. Both Pete and Celia were charter members of the V. F. W. which started in 1953.

Peter was very involved in the local Fire Department. He joined in 1932, and the only interruption was when he was in the Army. He was a volunteer for 40 years.

They lived in Sioux Center until their deaths, Peter on December 28, 1977, and Celia on September 22, 1983. They are both buried in the Sioux Center Cemetery.

Delivering milk with a dog drawn cart in Utrecht, Holland, was not a profitable business for Peter Schouten and his wife, Grace Veenis Schouten. In 1920 they decided to leave Utrecht and move to the United States to seek a better life as farmers. Peter and Grace Schouten and their five children, Cornelius, Margaret Schouten De Bie, Peter C., Henry and Katherine Schouten Mouw, aboard the S. S. Rotterdam, landed at Ellis Island in New York harbor in July of 1920 and traveled by train to Iowa where they settled near Rock Valley.

Their new occupation as a farm family was difficult and they were forced to move from one rented farm to another. On July 23, 1923 on a farm near Fairview SD when most of the family was in the field shocking oats, Grace Schouten gave birth to her last child, Melvin.

In March of 1939, Peter and Grace Schouten moved to a farm one mile east of Middleburg. Melvin joined them in May of the same years after graduating from Rock Valley High School.

On October 10, 1946 Melvin Schouten and Joanne G. Vander Maten, daughter of Andrew Vander Maten and Gertrude Vermeer Vander Maten, were united in marriage at the Grace Reformed Church in Middleburg. After a honeymoon in the Black Hills and Colorado, Melvin and Joann began farming with Mels father on his farm near Middleburg.

In 1949 Melvin, Joanna and their son, Alan, left Iowa for a farm 12 miles north and on mile west of Montevideo, MN. Their first three years in Minnesota were wet and discouraging ones. The north 40 acres of Schouten farm gradually became on of Minnesotas 10,000 lakes and, although the moisture produced lush pasture, their livestock overate causing many to die of bloat.

By 1955, with a family enlarged by sons Mark and Daniel and with a feeling that life had to be better than that provided by Minnesota farming. Melvin and Joann moved back to Iowa. After a farm sale on February 11, they packed up their belongings and moved to Sioux Center where Mel and his brother Henry Schouten, purchased the Plasier Plumbing and Heating Company from Jacob Plasier.

Melvin became the sole owner of Schouten Plumbing and Heating in 1957 and continued to operate the business for another 30 years. While in Sioux Center, a son Duane, and two daughters, Lorinda and Beth, were born to Mel and Joann.

On October 10, 1986 Mel and Joann celebrated their 40 th wedding anniversary at the Frist Reformed Church. It was a festive occasion attended by many friends and relatives.

In February of 1987 the plumbing business was sold to his son, Alena, who continues to operate the business today as Schouten Plumbing and Heating.

Melvin Schouten served on the Sioux Center City Council for 14 years until his death on August 24, 1988. He was active in the First Reformed Church as a deacon and elder and belonged to other civic organizations in Sioux Center and Sioux County. Joann Schouten is a busy housewife and mother and continues to be active.

During their 42 years together, Melvin and Joann Schouten were blessed with six children, all of whom graduated from the Sioux Center Community School system. Their eldest son Alan, married Shirley Dykshorn daughter of Edward and Margaret Kuiken Dykshorn of Sioux Center, Alan and Shirley have three children , Angela Schouten, Danielle Schouten and Greg Schouten. Alan and Shirley Schouten are the owners of Schouten Plumbing and Heating. Mark married Kimberly Utke of Minot, ND and their marriage has produced a son, Will, Mark is serving his second term as Sioux County Attorney and also is a partner in the Oostra, Bierma and Schouten Law Firm in Sioux Center. Dr. Kimberly Utke Schouten serves as professor and head of the music department at Northwestern College in Orange City.

Daniel Schouten is living with this wife in Tokyo, Japan , and is a business consultant with De Loitte-Touche, and international accounting firm. Duane Schouten is employed at Iowa State University in Ames, Iowa, as a computer and economic consultant with the Center for Agriculture and Rural Development. Lorinda Schouten is employed as a graphic artist in Phoenix, Arizona, The youngest child Beth Schouten, is living in the Netherlands and is active in mission work in Eastern Europe.

End of family story submitted to the book by Joann Schouten.

OBITUARY of Grace Veenis Mrs. Peter Schouten Sr. 1883-1970
Funeral services were held at the Vander Ploeg Funeral Home here at 10 A.M., Monday, December 28, for Mrs. Peter Schouten, Sr., 87, of Sioux Center, who died December 24 at the Sioux Center Community Hospital.
Services were conducted by the Rev. John Ekema, pastor of Free Grace Reformed Church of Middleburg and burial was made in the Middleburg cemetery.
Mrs. Schouten, nee Grace Veenis, was born in The Netherlands, May 17, 1883. She was married to Peter Schouten in The Netherlands January 12, 1905. He preceded her in death.
Survivors include Neil of Hawarden, Peter, Jr., of Sioux Center, Henry of Boyden, Melvin of Sioux Center; a daughter, Mrs. Adrian De Bie of Ontario, Calif., Mrs. Gerald Mouw of Sioux Center; a sister, Mrs. Bert Koning of The Netherlands, 29 grandchildren and 31 great grandchildren.
(Parents: Clarence Veenis & Catherina Havermeld from the IA 1925 Census Record.
Source: Sioux Center News, December 31, 1970)

OBITUARY of Peter Schouten 1881-1952
Born: July 3, 1881, Krimpenaanden Yssel, Utrecht, Netherlands
Died: September 9, 1952 Sioux Center, Iowa
Funeral services for Peter Schouten, father of Peter Schouten Jr. of Sioux Center, will be held Friday at 1 o'clock at the home in Middleburg and at 1:30 p.m. in the Free Grace Reformed Church there.
Mr. Schouten died at his home Tuesday night, Sept. 9 at the age of 71. He had been in ill health several months. Burial will be at the Middleburg Cemetery, with Vander Ploeg's Funeral Home in charge of the arrangements. Peter Schouten was born July 3, 1881 in Krimpenaanden Yssel, Netherlands. He grew up in Holland and was married there. The family moved to the United States about 33 years ago and lived for a time at Rock Valley, moving to Middleburg some years later.
Survivors include his widow and six children, Neal of Hawarden, Peter Jr. of Sioux Center, Catherine (Mrs. Gerald Mouw) of Sioux Center, Melvin of Montevideo, Minn., Margaret (Mrs. Adrian De Bie) of Artesia, California and Henry of Sioux Center. Also surviving are 20 grandchildren.
Source: Sioux Center News September 11, 1952
--------------------------------
[another obituary, different newspaper]
Funeral services for Peter Schouten, 71, of Middleburg, Iowa, former resident of Hawarden, who died Monday night, will be held at 1:30 Friday afternoon in Free Grace Reformed Church at Middleburg. Burial in Middleburg Cemetery.
He was born July 3, 1881, at Krimpen ann den yssel the Netherlands. He married Miss Grace Veenis in his native land and in 1920 the family came to America. For a number of years they lived on a farm northeast of Hawarden and later went to Rock Valley. When he retired he moved to Middleburg.
Survivors are four sons, Neal of Hawarden, Peter and Henry of Sioux Center and Melvin of Montevideo, Minn., two daughters, Mrs. Margaret De Bie of Artesia, Calif., and Mrs. Gerald Mouw of Sioux Center; 20 grandchildren and three sisters who live in Holland.
Source: Hawarden Independent Sept. 11, 1952 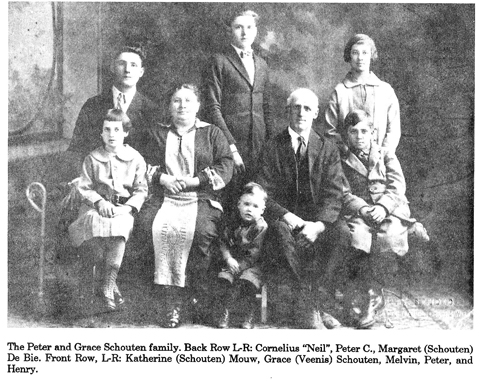