This family story was taken from the Sioux Center Centennial book of 1991 pages 500 and 501, and the story was submitted to the book by Ardene VerHoef. The story was transcribed for this BIOS by Beth DeLeeuw, volunteer for the Greater Sioux Co. Genealogical Society.

Arend Jan Sandbulte was born on April 5, 1865, in Gelderland, the Netherlands. His parents were Anthony and Johanna (Grievink) Sandbulte. The Sandbulte name came from the sand hills near the German border where the family farmed. By the time Arend was 24 years old, both his parents had died, so, looking for new opportunities away from those poor farm lands, he and his two brothers, Herman and Johan, Johans wife, Johanna, and a sister Hendrika, sailed for America. Wilhelm and Hendrik, also brothers, moved to the Dusseldorf area in Germany, and their descendants are found there.

Upon arrival in America Hendrika Sandbulte stayed in New York while Arend, Herman, and Johan and Johanna went on to Orange City, Iowa; they farmed in the area.

Dirkje Holwerda was born on July 19, 1870. She and her mother, Aartje Holwerda, lived in Hijum, Friesland, the Netherlands. Nearby lived Aartjes parents and her brother, Maarten, and his family. As Dirkje grew up she enjoyed life with this extended family; holidays brought special fun  December 6, St. Nicks Day, was a day for searching out hidden gifts; the children ran from house to house to find their presents. Maarten-ome taught music in the village school and also gave private singing lessons. As Dirkje grew into her teens she often helped him and served as his substitute on occasion. When she was 18 years old, in 1888, she and her mother emigrated to the United States and settled in Orange City, Iowa.

The Sandbultes began their lives together on a farm three miles west and ¼ mile south of Kroons Corner. This farm was owned by the Hendrik Beernink family, and the Sandbultes continued to rent and live there, although they purchased another farm near Ireton and in turn had renters there.

The Sandbulte farm was a busy place. Horses were used to power the farming equipment, the barns and sheds housed stock animals, and the children learned early to work hard. Etta, though, was the only daughter involved in farming chores, the girls of the family helped in the house and garden, cleaning, laundering (with a dog-treadmill-driven washing machine; the dog disappeared each Monday morning), cooking, canning, etc. The farm sustained the family; the garden was a favorite of Dirkjes as she worked in her wooden shoes along the rows of vegetables. In the fall and winter, hogs and beef were butchered on the yard, and the women canned or salted all the meat. The family ate well; Dirkje was a good cook, and relatives, friends, neighbors, and farmhands loved to put their feet under her beautiful table.

Dirkje taught her daughters how to do handwork, especially embroidering, knitting, crocheting, and sewing; although early pieces were often stiff with perspiration from tense fingers by the time they were completed, the girls became as good as their mother in producing beautiful work.

Survivors in this family recall a very loving home. Arend assumed the duties of nurse whenever anyone was ill. In her youth Johanna contracted meningitis; her father cared for her around the clock for weeks, sometimes carrying her stiffened, slight form from room to room. Because her head was so painful, no one could touch Johannas long, thick hair during her illness. As she recuperated, her father spent hours and hours over a period of many days slowly and gently combing out the tangles.

Arend was also the shopper. He enjoyed store-bought clothes, and he loved to surprise the children with gifts on special occasions.

The children were raised speaking Friese and Dutch; when they went to school, a rural one-room school, Center Township Number 1, they were confronted with the English Language, and so became trilingual. Education was important in this family, and Arend was the director for this school for about 25 years, the time his children were students there. At the end of each school year a picnic for all the districts families was held on the Sandbulte farmplace. A playground was erected in the grove, and games and food were the order of the day. One year, due to rain the picnic was held in the house; it was a crowded affair. When Arend retired from the directorship, the folks in the district held a party for him and presented him with a rocking chair.

The family home was rather small, with one bedroom downstairs and two, plus a storeroom, upstairs. Ben and Joe slept in the storeroom during their teen years, and during the winter it was an icy place. The only heat upstairs was provided by the chimney of the space heater in the living room below. Although space was limited, the Sandbultes took in Dirkjes mother in her declining years. Grandmother died in the master bedroom after several years of care. Later Uncle Herman, Arends bachelor brother, was given the same hospitality and care; he too, died in the master bedroom.

At first the house had no modern conveniences. As the years went by, a telephone was installed, then electricity, but the pleasures of indoor plumbing were never experienced by the family in this house.

After a days work, the family looked forward to a relaxing evening. They loved to play cards under the gaslight, but Ma insisted that the girls put in several hours of handwork first. The living room housed a pump organ. The family members loved to sing, but Cynthia was the only child to take organ lessons. Social events included visiting, parties, and church activities. The Sandbultes were members of the First Reformed Church in Sioux Center, where all the children were baptized. Sunday evenings, after Christian Endeavor, the young folks began to court. The older girls were courted in buggies, a romantic form of transportation in good weather.

After finishing elementary school Joe and Ben worked on the home farm; the girls, who had been well trained, were hired by various families as housekeepers. As the girls found mates and married, these weddings took place at home. These were all-day affairs with a noon banquet for all. Agnes wedding was held at Henrietta and John Schuitemans home, since shivaree-ers were expected in the evening. Joe and Ben, well known in the county for their strength, were called upon to keep things from getting out of hand.

In the spring of 1929 Arend and Dirkje bought and moved to the house at 619 1st Ave. N.E. Arend was ill with cancer, and he died at home on September 23, 1929. Henrietta recalled visiting with her father a few days before his death; as she wept at his bedside, he said Ock, Dreka, gif moet niet schreewen, ik ben wan alles hier opt aarda verlost. (Oh, Henrietta, you must not cry, I am released from all earthly things.)

Grandma Sandbultes house became a hub for the family; her grandchildren could always expect a warm welcome there which included lots of food. One winter, after a disastrous summer for the crops on the Ireton farm, there was very little income for Dirkje, so she closed up the house and, much to the delight of her grandchildren, made the rounds, spending several weeks in each of her childrens homes.

Dirkje remained in her home on First Avenue until 1959, when she moved to the nursing wing of the Sioux Center Community Hospital. She died there on October 3, 1963, at the age of 93 years.

Except where especially noted, the people listed above were born in the Sioux Center area.

MARRIAGE RECORD of Arent and Dirkje see at the end of Arends obituary.

OBITUARY OF AREND SANDBUTE
From the Alton Democrat, September 27, 1929, Sioux Center news:
A. J. SANDBULTE DIED MONDAY
Funeral Held at the First Reformed Church on Thursday
A. J. Sandbulte, well known retired farmer, passed on at his home in Soo Center Monday morning. He had not been in good health for some time, but failed rapidly after returning from an examination at Rochester a few weeks before his death, the doctors there having given him no hope for recovery.
Mr. Sandbulte was 65 years of age. For thirty years he farmed the Beernink place near Sioux Center, though he also had a farm of his own, and in March of this year he retired and came to town with his family. He is survived by his wife, five daughters and two sons, four children having preceded their father in death. The surviving children are Mrs. Henry Den Herder, Ireton; Mrs. Opie Feekes, Rock Valley; Mrs. John Schulteman, Cynthia, Agnes, Joe, and Ben, all of Sioux Center. The family have the sympathy of the community, where Mr. Sandbulte was highly regarded by neighbors and friends. He was a faithful member and worker in the First Reformed church, where funeral services were held Thursday afternoon, following brief services at the home.
* * * * * * * * * *
A short obituary in the Sioux Center Nieuwsblad, Sept. 25, 1929, adds that cancer had already begun its destructive course by the time he moved to town, and that he was no longer able to eat because it had closed the passage to his stomach. In recent years he had served as an elder in the First Reformed Church, and was a director of the Mutual Telephone Company for many years.
A brief note in the Sept. 26 De Volksvriend on attendees at his funeral says he died of cancer of the esophagus.
* * * * * * * * * *
RESEARCH NOTES
The Sioux County Cemetery Index has Sandbulte, Arend J., b. 1865, d. 1929, father, ss Dirkje, Memory Gardens Sioux Center IA.
His death certificate has Arend Jan Sandbulte; born April 5, 1865 in Holland; father Anthony Sandbulte; died in Sioux Center at 7 a.m. September 23, 1929; cause, carcinoma of stomach, duration 6 months 23 days.
FindaGrave.com has him born 5 May 1865 in Aalten Municipality, Gelderland, Netherlands; wife Dirkje Holwerda Sandbulte (1870-1963, married 1894); children Etta Sandbulte Den Herder (1899-1995), Johanna Elizabeth Sandbulte Feekes (1901-1974), Henrietta Sandbulte Schuiteman (1903-1990), Joe Sandbulte (1905-1962), Ben Sandbulte (1907-1963), Cynthia Sandbulte Rensink (1909-1997), and Agnes Sandbulte Harskamp (1911-2009).
The 1894 Sioux County marriage register gives his parents as Anthony Sandbulte and Johanna Grievink; bride Derkje Holwerda, born in the Netherlands, fathers name unknown, mother Aartje Holwerda; both residents of Orange City; married in Orange City March 7, 1894.

OBITUARY OF DIRKJE SANDBULT Mrs. Arend 1870-1963
Source: Sioux Center News (10-10-1963)
Born: July 19, 1870
Died: October 3, 1963
Funeral Services Held Saturday for Mrs. Dirkje Sandbulte
Funeral services were held at the First Reformed church here at 1:30 p.m. Saturday, October 5, for Mrs. A. J. (Dirkje) Sandbulte, 93, a resident of Sioux County for 75 years, who died at the Sioux Center Nursing Wing Thursday following a lingering illness. Services were conducted by the Rev. Harry Brower and burial was made in the Sioux Center Community Cemetery under the direction of Co-operative Funeral Service. A brief service attended by members of the family was held at the Little Chapel preceding the service at the church.
Mrs. Sandbulte was born in the Netherlands July 19, 1870, the daughter of Mr. and Mrs. Martin Holwerda. She immigrated to America with her mother at the age of 18, in 1888, and settled at Orange City.
In April of 1894 she was married to Arend John Sandbulte and to his union 11 children were born. The Sandbultes farmed near Sioux Center until retiring and moving into Sioux Center in March of 1929. For the past four years Mrs. Sandbulte had resided in the Nursing home there.
Mr. Sandbulte passed away on September 23, 1929. She was also preceded in death by her sons, Joe and Ben, and 3 sons and 1 daughter in infancy, and by her parents. 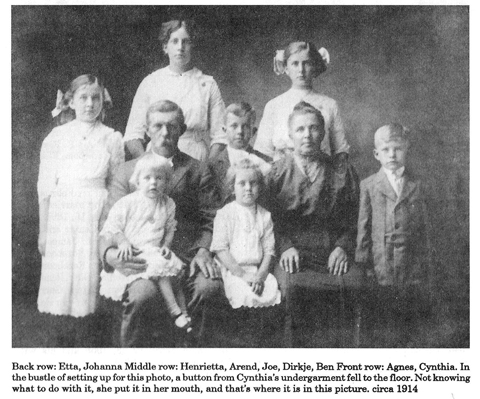