This family story was taken from the Sioux Center Centennial book of 1991 page 652 and 652. The story was submitted and authored by Wilma J. Vande Berg, for the purpose of this BIOS some research notes have been added.

Teunis Wayenberg and his wife Geisje Vande Brake were among the very first pioneers who settled just west of the Branch, near Sioux Center. Teunis Wayenberg was born May 21, 1929 neat Nunspeet, Gelderland, Netherlands. In 1852 he married Geisje Van de Brake who was born February 17, 1824. Teunis and Geisje came from Nunspeet, Netherlands in the years 1867. They first spent three and one half years in Wisconsin before they arrived near Sioux Center on June 17, 1871. They settles three miles south of present day Sioux Center, Teunis Wayenberg wrote of his feelings upon arrival in Sioux County as follows:

It was on June 17, 1871, that we with three families first saw this huge plain and settled on the west side of the small stream called the Branch. We would hardly have found the place of our destination if we had not been for W. Vander Zalm. Having arrived here with his help, we unharnessed our horses, who would probably have said, if they could have spoken. we are glad to be here. But this was not the case with me. There on that lonely plain, not knowing how far to the west there were people living, and to the east separated by a river without a single bridge, I felt myself as separated from the communion of people. Added to that was the fact that the first meeting on my land was with two prairie wolves. As a consequence he said to his wife, that even though all the gold could be scooped up here, yet I could not stay here. However, I could not leave just like that either. And that was a good thing too, because it did not take long before more settlers came and that renewed the hope that we would live in communion with others again.

During their first year here Teunis and his son, Henry , worked on the construction of the railroad south of Mankato, Minnesota. Teunis was a carpenter as well as a farmer, he built a number of pioneer shanties. It is also noted that he built the casket needed when the small daughter of Jacob Koster lost her life when her dress caught fire in 1878.

It is recorded in the December 1926 issue of the Great Northern Semaphore that in the summer of 1882 and 1883 about three years before surveys were run for the Sioux City and Northern Railway, Mr. Wayenberg insisted that he saw both passenger and freight trains cross his farm near his house. Mr. Wayenberg was disturbed when others failed to see the phantom train as he pointed out the lighted cars and the brakeman. Later the surveyors wanted to put the train line through sloughs on the west part of his farm, by pointed out the place where he saw the trains n his visions just east of the house. The surveyors said it was impractical to put it there because that would require a 20 foot cut through his yard close to the buildings. Mr. Wayenberg resisted but after some time the dispute and being paid a sum of money the engineers drew up the right of way west of the farm place. Then a problem developed with the route, the track had been laid out through the west slough. It was then decided by the railroad company that the train should go the brow of the hill on the east side of the Wayenberg farm place and that in fact would save the railroad thousands of dollars. After all the disputes and problems with interpretation of the railroad line was built in the late 1880s, right where Teunis Wayenberg had seen it is his visions some years before. He earned the reputation in the area as the Prophet.

Henry Wayenberg paid a tribute to his pioneer mother, Geisgje, by reporting my mother was a fine woman, always ready to help other people, and nearly every lady needed help, especially at the birth of babies, as she was a very capable midwife. She took the place of a doctor, brought over 150 babies into the world. You may think she made enough to keep the family, but she never charged a fee, as the people had no money. She was so careful that she never lost a case, a remarkable record. Even when the doctors came to Orange City, people would still call on mother until her age and rheumatism forced her to quit. Many a time she walked three or four miles to see her patient. It might be fitting to call her the Angel of the Prairies.

The last three weeks of March 1898 were very sad days in the life of the Wayenberg family. Teunis Wayenberg died March 18, 1898 less than one week after his wife Geisje died on March 13, 1898, then on March 28, 1898 their daughter, Jentje (Mrs. Hein Mouw), of Pipestone County Minnesota died leaving ten children the youngest only two years of age.

The author of this family history has not been able to acquire much on the lives or whereabouts of the descendants of Teunis and Geisje Wayenberg. Their sons Hendrick Henry and Johannes , lived in Sioux Center and were prominent citizens and businessmen in the town until they moved their families to North Yakima, Washington in the early 1900s. Daughter, Minnie (Mrs. Teunis Prins) and family also left for N. Yakima, Washington. Teunis Prins or Prince had a general store in Sioux Center as well as being involved in many aspects of the business community of the day. The Wayenberg sons were noted as being in the construction business , implement business and on the school board. Teunis Prins was in the first bank and on the Welcome Creamery Board.

The children of Teunis and Geisje Wayenberg were as follows, they are not necessarily in birth order. The information was obtained in 1991.

OBITUARY OF TEUNIS Wayenberg 1829-1898
From the Alton Democrat of March 26, 1898 Sioux Center News.
Last Tuesday, March 18th, Teunis Wayenberg, one of our oldest and respected citizens died at the age of Seventy years. Mr. Wayenberg was one of the pioneers of Sioux county, coming here in the early days of the settlement. He took up a homestead which he farmed until 1890, when he moved to Sioux Center. He was a good neighbor and devout Christian man, having been a member and elder of the Reformed church in this city since its organization. His wife preceded him over the dark valley only one short week ago, and his death is doubly sad coming as it does, when the hearts of those left to mourn his loss are already fraught with anguish and sorrow. The funeral was held Monday conducted by Rev. DePree and Beets and was very largely attended.
(See his wife's obit previously submitted. Teunis Waijenburg was married 29 Apr 1853 at Ermelo, Gelderland, Neth. He was born 1 Jun 1828 at Oldebroek, Geld. Neth. to Peter Waijenburg and Johanna Geertruida Ramaker. He married Geisje Van de Brake born 17 Feb 1824 at Ermelo Geld Neth. She was the dau of Hendrik van de Brake and Jentje de Bruin. They had several children as listed in the Geisje's obit. There is a large family history story on this family in the Sioux Center Centennial book of 1991 that can be copied for those interested.)

OBITUARY OF GEISJE Van de Brake Mrs. Teunis Wayenberg 1824-1898
From the Alton Democrat of March 19, 1898
Mrs. T. Wayenberg, aged 73 years, died at her home in Sioux Center on Saturday, March 12th. Deceased came to Sioux county with her husband in the early seventies and were among the first who settled in West Branch township, where they have lived ever since. First on the homestead
three miles south of town, but for the last eight years they have made their home in this city. Mrs. Wayenberg was loved and respected by all who knew her. The funeral was held Tuesday and was attended by a host of friends of the deceased.
The services were conducted by Rev. James De Pree. We extend our heartfelt sympathies to the bereaved husband and children. At this writing
Mr. Wayenberg is dangerously sick, and fears are entertained that he may not recover.
(There is a large family history in the Sioux Center Centennial book of 1891. Copy can be obtained from this site. They came to the USA from Geld. Neth. in 1867. They were married at Ermelo, Gelderland Netherlands on 29 Apr 1853 Teunis born 1 Jun 1828 Oldebroek, Geisje was born 17 Feb 1824 at Ermelo. Her parents were Hendrik Van De Brake and Jentje De Bruin. They were prominent pioneers in the West Branch/Sioux Center area. They has the following children. Jentje Mrs. Hien Mouw, Allie Mrs. Smit, Hendrik Wayenberg, Rinnie Mrs. Raak, Johannes moved to WA, Dina Mrs. Hulshof, and Minnie Mrs. Teunis Prins.) 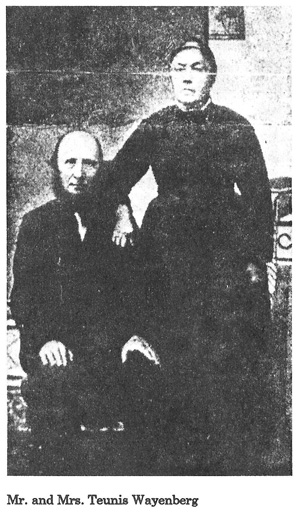