Gerrit was born in the Ireton area on May 12, 1895 to Sjoerd De Vries and Japkine (Attema) De Vries. He was the oldest of five children in his family. He had two sisters, Anna Van Gelder (John) and Agnes Huizenga (Jake) and two brothers, Oscar and Charles. Gerrit's parents were farmers in the Ireton area.

Alice (Hoogland) De Vries was born at Oldebroek, Nederland, May 27, 1897, to Aalt Hoogland and Aaltje (Heerdink) Hoogland. She was the youngest of ten children. She had five sisters and four brothers. Her family immigrated to the United States in 1903, when she was six years old, and settled in the Sioux County area.

Their courtship started shortly after Gerrit's folks had their farm sale in January 1919. A neighbor introduced Gerrit to his hired girl. They dated with a horse and buggy. Alice worked in the Sioux Center Hotel and later in the Orange City Hotel. Gerrit worked for C.J. De Jong, a farmer near Maurice. They courted for two and a half year and then were married on January 27, 1922 (Alice's folks 45th wedding anniversary.) The smallpox was going around and Gerrit, Oscar, and Agnes had them the month before the wedding. Gerrit and Alice lived on a small acreage in Sioux Center. They were members of the First Christian Reformed Church. In 1923, they moved to a farm by Perkins. Jeanette was born February 25, 1923. The following year Alida was born on June 18, 1924. They moved to another farm near Boyden in February, 1925. George was born on April 29, 1926. Gerrit bough his first car, a Model T in 1927. Alfred was born January 3, 1931. Harold was born March 29, 1933. March, 1936, they moved to a farm northwest of Orange City. That was a rough winter and it took a lot of snow scooping to get them moved. LeRoy was born on March 10, 1938. They bought a farm southwest of Sioux Center and moved there in January, 1942. They lived there until January, 1957, when they retired and moved to Maurice. They were members of the First Reformed Church in Maurice. (LeRoy, their youngest son chose Gerrit and Alice's 40th anniversary as his wedding day.

Alice had major surgery for cancer in June 1964. She re-entered the hospital in December, 1966 - because cancer had spread. She passed away on February 27, 1967, and was buried in the Sherman Township Cemetery near Maurice, Iowa.

Gerrit had surgery in January, 1969, and moved to Pioneer Home in Orange City in February, 1969. He lived there until December, 1976 and then he moved to the Hospital Wing in Sioux Center where he stayed until he passed away April 25, 1985. He was buried in the Sherman Township Cemetery, near Maurice, Iowa. 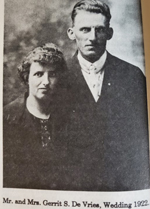